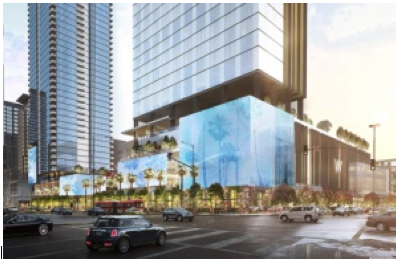 NEIGHBORHOOD POLITICS—Check out the graphic at the top of this article. This is what we will be seeing at Olympic and Figueroa when the new hotel-residential-commercial project is built there, probably in 2022.

Those glowing blue zones that show palm trees will be graced with blazing digital advertising, in the style of Times Square in Manhattan. According to recent actions by the City Council PLUM committee, this will be part of a new sign district that extends the present one, including neighboring LA Live and the Convention Center. The area is zoned Regional Commercial, so its aptness for such signs is not in question. Still, two observations are in order:

First, the ordinance extending the sign district contains incorrect prose about the virtues of digital signs: "Such infill projects require unique and vibrant signage both to attract visitors to the Central City area and to attract investment in transformative redevelopment projects."

No, they don't. Vibrant signage is not required to get people to go downtown. People go for attractions such as basketball games, concerts, conventions, art exhibitions, and the like, and that's what they spend money on. A great many attractions exist already in downtown LA that lack such vibrant signage and still draw multitudes of folks with money to spend.

Second, these digital signs will be erected with zero takedowns of other signage elsewhere in the city. The pending Citywide Sign Ordinance, now also under consideration by the PLUM Committee, contains language requiring removal of existing signage in a ratio of between 2:1 and 10:1 in order to erect new digital signs.

The Committee has been sitting on this ordinance without action since May. If the committee members had been a little less dilatory about considering this admittedly hot political potato, LA citizens could count on some visual relief elsewhere as compensation for the erection of these new advertising vehicles.

This project does improve that particular downtown spot in many ways. Yet it could be still better, with a little more courageous or creative thinking by members of the PLUM Committee.

(Patrick Frank is President of the Coalition to Ban Billboard Blight.)