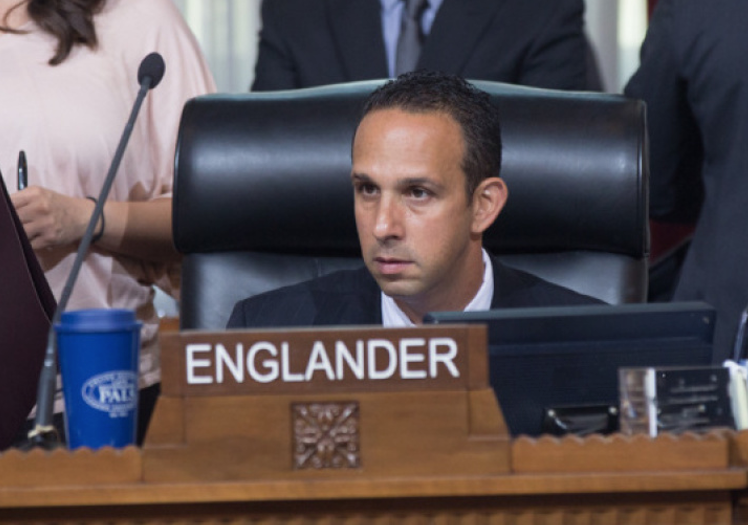 LA WATCHDOG-On March 27, former Los Angeles City Councilman Mitch Englander agreed to plead guilty to one count of scheming to falsify material facts.  He is scheduled to be sentenced on January 25.

According to the Los Angeles Times, federal probation officials are recommending three years of probation, a $9,500 fine, and no jail time or community service.  The U.S. Attorney’s Office is pushing for 24 months in jail, 300 hours of community service, and a $45,000 fine.

Englander deserves the max: three years in the clink and a $250,000 fine.  He has violated the public’s trust and disgraced our City.  Now, if he could give up a few of the higher ups in the criminal enterprise known as City Hall, then he would deserve a lighter sentence.

Mayor Eric Garcetti has announced that the City has entered into deals with the Coalition of LA City Unions (representing 18,000 civilian employees) and United Firefighters of Los Angeles City (representing 3,600 members) to defer raises in return for no layoffs and furloughs during the term of the agreements.  The Coalition workers are protected until the end of this fiscal year while the firefighters are protected for two years.

However, the Mayor and the City have not released any details about these arrangements and the financial implications for the City’s budget over the next two or three years.  More than likely, the City is kicking the can down the road, once again selling out the City to their Partners in Labor, just like they did when they approved budget busting labor agreements in 2019, entered into the Separation Incentive Program in July, and failed to implement the budgeted furlough plan that would have saved $140 million.

The City is not only facing a $675 million “budget challenge” for this fiscal year that ends on June 30, but must also eliminate $130 million of overspending.  But this is just the beginning because the City is looking at an estimated deficit of over $1 billion next year.

But next year has not been a topic of conversation with Angelenos.  Why not? Most likely because it will require layoffs and furloughs, an anathema to the City’s Partners in Labor. But what the hell, it only concerns the financial integrity of our City.

And speaking of Mayor Garcetti, he is scheduled to be deposed in February in the sexual harassment lawsuit where Matt Garza, a police officer on Garcetti’s security team, is suing the City for sexual harassment and a hostile work environment.  Garza alleges that a senior Garcetti operative made inappropriate remarks and hugs that were witnessed by Garcetti and that the Mayor joked about the operative’s behavior.  Unfortunately, tickets will not be available, despite the fact that scalpers believe the prices would be in the five figure range.

On the brighter side, the Assessed Valuation of the City’s property increased to $696 billion, an increase of 6.6%.  This is good news because property taxes represent over one-third of the City’s budgeted revenues and are not overly sensitive to swings in the economy.  Of this increase, about half resulted from the sale or transfer of properties while the inflation adjustment represented about 30%.  One of the benefits of Proposition 13 is that property taxes represent a stable source of revenues, even during downturns in the economy.

Next week, the Department of Water and Power will be hosting meetings on Thursday, Friday, and Saturday to discuss its 100% Renewable Energy Study and how the Department will be fossil free by 2045 as mandated by the State.  Unfortunately, there will be no discussion of the impact on rates of this program and the plan to upgrade the distribution system.  The link is www.ladwp.com/CleanEnergyFuture.