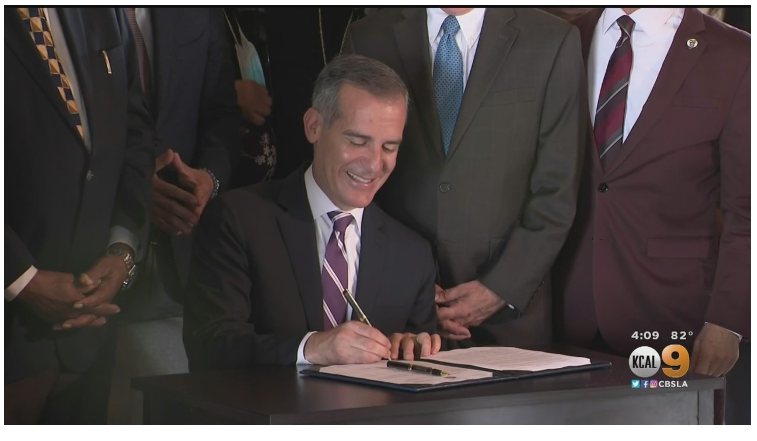 However, some would rightfully argue that budgeting is a 24/7/365 endeavor at City Hall.

In this memo to the General Managers of All City Departments, Garcetti called for greater “equity and inclusivity” and to “find new and creative ways to make our City equitable and sustainable for generations to come.” At the same time, all departmental budget proposals must reflect zero growth in their reliance on General Fund revenues.

Garcetti also said that the City should “live within its financial means to ensure that the City can sustain these efforts in the years to come.” At best, this is a disingenuous statement because during his eight years as mayor, the City has had record revenues (up over 50%) but always managed to have a Structural Deficit, year after year.  This includes the budget busting labor agreements in 2019 with the police and firefighters that resulted in a $1.5 billion hit to the City’s finances over the following four years.

The reality is that the City is anticipating a $261 million budget gap next year according its Four Year Budget Outlook even though it is projecting a 4.5% increase in ongoing revenues to a record $7.2 billion.  [This excludes the $640 million cash infusion from Washington’s American Rescue Plan in this fiscal year.]  This deficit was not mentioned in the Policy and Goals memo.

To close this gap, the City will either have to cut basic services or raid the $500 million Reserve Fund or some combination of both.  But the City needs to be very cautious about hitting up the Reserve Fund because the City must have the necessary resources to fund the impacts of a downswing in the economy or a resurgence of the virus.

The City also needs to be cautious about cutting services, especially when it impacts marginalized communities.  When the City Council was determining where to spend the $150 million that was reallocated from the Police Department budget to community benefits, the Councilmembers dedicated a majority of these funds to public safety and infrastructure (streets, sidewalks, parks, trees), disadvantaged version of equity and inclusivity.

Once again, the City, despite record revenues, is looking at a sizeable deficit.  And rather than bite the bullet and live within its means, the City will once again continue to kick the can down the road, an appropriate conclusion to Garcetti’s eight years as our fiscally irresponsible mayor.