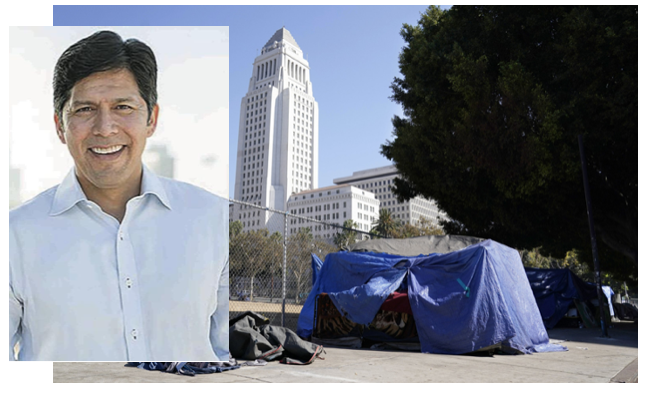 LA WATCHDOG - City Councilman and wannabe mayor Kevin de Leon (“KDL”) has been outspoken about holding the members of the City Council accountable for failure to meet the goal of creating 25,000 new housing units by 2025.

According to KDL, if the goal is not met, we can vote them out of office.

But voting them out of office is not a realistic solution.  First, elections are only held every two years and each Councilmember will only have to face the voters once every four years.  Second, the deck is stacked in favor the Councilmembers because they are supported (some would say owned) by the campaign funding leaders of the public sector unions, making the chances of a non-incumbent being elected highly unlikely.  Third, the Mayor needs to be held accountable since he or she is the City’s Chief Executive Officer.  The City Attorney and Controller should also be held accountable because they are part of the City Hall establishment.

A better system would be to hold City Hall accountable by requiring that 6,250 new housing units be created in each of the next four years.  If this goal is not met on an annual or cumulative basis, then their salaries ($214,000 a year, the highest in the nation) would be cut in half and their discretionary funds would be devoted to creating housing units for the homeless.

This would require the City Council to approve an ordinance to this effect, a highly unlikely event since KDL and the rest of his comrades are all talk.  Besides, they would come up with numerous excuses as to why a homeless accountability ordinance would not fly because the City is relying on the State and Federal governments.  Baloney, you are being paid to develop solutions, not make even more excuses.

Alternatively, we, the voters, can hold their feet to the fire.

In June of 2022, six incumbents will be running for reelection (Cedillo, Blumenfield, Rodriquez, Price, Bonin, and O’Farrell).  A litmus test would be whether they support a homeless accountability ordinance.   This may make a difference in several races where the incumbent is facing real challengers.

Another alternative is to send a message to City Hall by voting NO on any bond measure or tax increase (including those related to homelessness) unless there is a strong provision in the measure to hold City Hall accountable for meeting the homeless housing goals.

Or when KDL is running to be our next mayor in the June primary, the battle cry will be anybody but KDL.

Angelenos are sick and tired of all the excuses from the Mayor and the City Council.  Encampments are throughout the City.  Permanent supportive housing units cost more than $520,000.  The results from the $1.2 billion of homeless bonds have fallen far short of the promises made in 2016.  The entitled trade unions are driving construction costs up by an estimated 25%.  Financing and soft costs are a third of the total costs.  There is no management, no one is in charge, but there is a bloated bureaucracy.  There are too many excuses and lies from City Hall.  And the homeless industrial complex is thriving.

KDL, if you are the leader that you pretend to be, make yourself and the City Council accountable for meeting the goals that you and the Council have established.