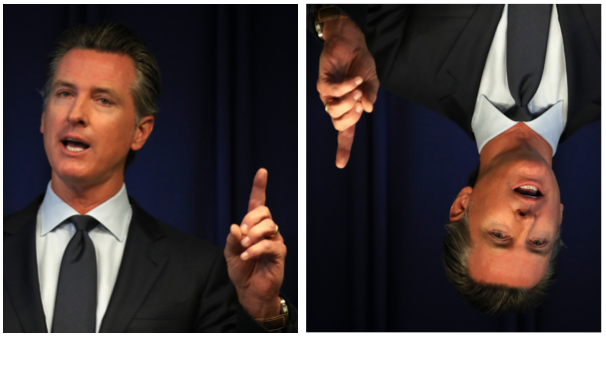 LA WATCHDOG - A recent poll indicates that the September 14 special election to recall Governor Gavin Newsom is essentially a tossup, with 50% of likely voters opposed to the recall while 47% are supportive.

This is a significant swing from last month when only 36% supported the recall, leading many to believe that California’s “rebellious voters” may be dissatisfied with Newsom, the Legislature, California politics, and the direction of the state.

But will it make a difference if Newsom is recalled?  Probably not since the Democrats hold a super-super majority (75%) in the both the Assembly and Senate. This will allow the Legislature to override any veto of the new, lame duck, Republican Governor.

Many believe that Newsom should not be recalled despite his mediocre record. George Skelton, a respected columnist of the Los Angeles Times, gives Newsom a C grade as governor.  And while Newsom can be faulted for a variety of reasons, including his $1,000 a person dinner at The French Laundry, Skelton supports Newsom.  After all, he is not a crook like Jose Huizar.

Many are upset that the recall will cost the State and county governments $276 million. And this does not include millions in campaign contributions that will buy thousands of annoying ads that will drive us to distraction over the next seven weeks.

On the other hand, many voters are viewing the recall as a referendum on Sacramento where they will be able to express their dissatisfaction on the efficiency of the State government and to question whether the State is headed in the right direction.

Without getting into the details, trouble spots include the incompetency of Department of Motor Vehicles.

There are the massive cost overruns associated with California’s High Speed Rail that expected to cost $100 billion, not the $33 billion our politicians promised in 2006 when promoting the $9 billion bond measure.

The Economic Development Department is responsible for $31 billion in fraudulent unemployment claims.  Its Unemployment Insurance Fund has a deficit of over $25 billion.

We also have one of the highest unemployment rates in the country.

The State’s pension plans are underfunded by hundreds of billions of dollars, a liability that will be dumped on the next three or four generations of Californians.

We have the highest gas prices and utility rates in the continental United States.

The State is experiencing a severe drought, exacerbated by the State’s failure to build additional reservoirs.

At the same time, the State is being ravaged by wildfires, highlighting Newsom’s false claim that 90,000 acres were treated with fire breaks as opposed to the actual 11,000 acres.

Crime is rampant in the State as witnessed by the looting of stores in San Francisco and the increased shootings and homicides in Los Angeles.

The State has failed to adequately address the homeless crisis other than by throwing money at the problem.  While there is lots of hot air, there is no real plan or competent management.  And $530,000 a unit is unacceptable.

The same is true for affordable housing, although there are those in the Legislature (Scott Wiener and Tori Atkins) that are doing their best to destroy residential neighborhoods by eliminating local control of planning and zoning.

As for the virus and its resurgence, Newsom is in a no win situation, but his inconsistent approach and the resulting confusion results in a barely passing grade.

While the bookmakers overwhelmingly favor Newsom defeating the recall, will enough of California’s rebellious voters express their dissatisfaction with Sacramento by voting to recall Newsom?