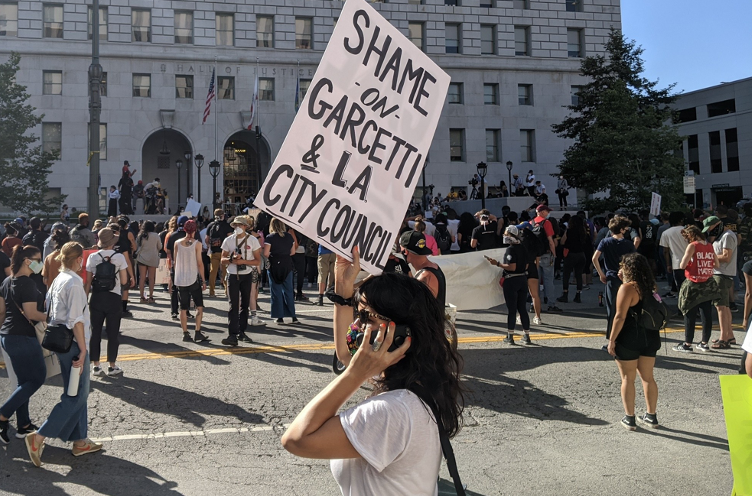 LA WATCHDOG--Once again, Mayor Eric Garcetti, City Council President Nury Martinez and the other three Councilmen (Koretz, Krekorian, and Buscaino) on the Executive Employees Relations Committee placed the interests of the City’s public sector unions ahead of the financial integrity of our City and the best interests of all Angelenos.

On February 5, the City Administrative Officer updated his Second Financial Status Report of December 4.  But instead of making progress in eliminating the budget gap, the shortfall increased from $20.8 million to $77.5 million as a result of deals cut with the civilian and police unions. [See Council File 20-0600-S84, Second Financial Status Report]

On January 12, the City entered into an agreement with civilian unions where the unions agreed to defer their wage increases this year to the next fiscal year in return for the City cancelling furloughs and layoffs for this fiscal year that ends on June 30.  But this deal only increased the budget gap by $36 million as the salary deferrals of $23 million were dwarfed by the cancellation of furloughs that were expected to save $59 million.

This agreement with the civilian unions also eliminated layoffs this fiscal year of almost 500 civilian employees, including civilian personnel who worked for the Police Department (273), the City Attorney (143), Animal Services (45), and Bureau of Engineering (27).

The City also entered into an agreement with the Police Protective League where the union agreed to delay a pair of raises due in the upcoming year (2021-22) to the following year (2022-23) in return for the City eliminating layoffs of 355 police officers this year.

Overall, the no layoff policy will add $45 million to the budget gap.

The Mayor and the City Council have a history of giving away the store to the public sector unions.  In 2019, the City entered into labor agreements with the police and firefighters knowing that the agreements would blow an $150-200 hole in the budget and result in deficits of $200 to $400 million a year for the next four years.

Our cash starved City also implemented the ill-conceived Separation Incentive Program that drained $130 million from the City’s treasury for only $2.6 million of savings this year.

For the fiscal year that begins on July 1, the anticipated budget gap is estimated to be more than $1 billion.  This results from the costs associated with the 2019 budget busting labor agreements ($228 million), increased pension contributions ($127 million), and Covid-19 related revenue short falls (versus budget) estimated to be in the range of $600 to $900 million.  This will require furloughs and layoffs that will be the subject of closed door negotiations between Mayor and City Council and the campaign funding leaders of the City’s public sector unions.

Based on past history, the financial integrity of our City and the best interests of all Angelenos will be secondary to the political ambitions of Mayor Garcetti, Nury Martinez, wannabe Controller Paul Koretz, and the other members of the City Council as they will sell us out to the politically powerful leaders of the public sector unions. But what else would you expect from the most corrupt City Hall in the history of Los Angeles?