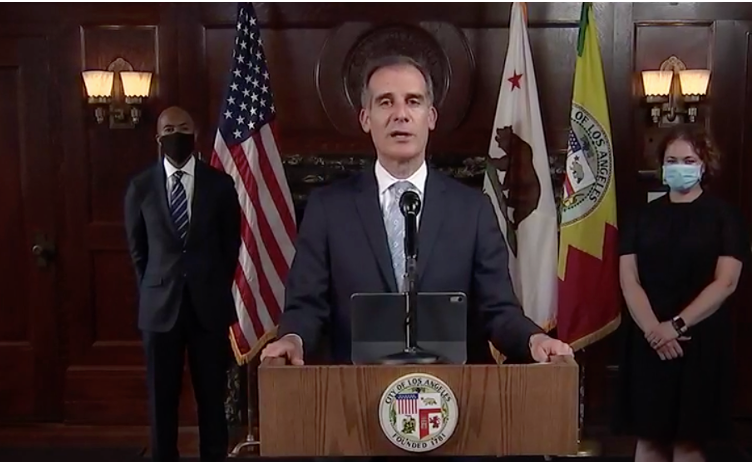 LA WATCHDOG--The City of Los Angeles is facing a “budget gap” of more than $1 billion for the next fiscal year that commences on July 1, 2021.

According to the CAO’s Four Year Budget Outlook, the budget gap for next year is expected to be $228 million as a result of the budget busting labor agreements that were approved by the Mayor and City Council in the fall of 2019.

Contributions to the City’s two pension plans are expected to increase by $127 million because of changes in economic and demographic assumptions.   This increases the deficit to $355 million.

At the same time, the City needs to solve this year’s budget gap of $675 million.  This consists of a revenue shortfall of $600 million and the repayment of a $75 million loan from the Public Works Trust Fund that was used to “front-fund” the City’s Covid related expenses.

To close this year’s budget gap, the CAO is relying on the Reserve and Budget Stabilization Funds for almost $260 million, deficit financing of $150 million, a sure sign of desperation, and other measures to “save” around $170 million.

However, the remining $95 million is problematic because it involves difficult negotiations with the leaders of the City’s public sector unions. About half of the “savings” result from the CAO’s recommendation to lay off 1,894 employees, including 951 cops and 728 civilians who work for the LAPD.  However, these layoffs were not approved by the City Council because they are concerned about the impact on public safety because of less cops on the streets and the reaction of the Police Protective League and other leaders of the public sector unions.

As the City Council and the Mayor tackle the City’s billion-dollar budget crisis, they need to develop an integrated solution that address both this year’s $675 million shortfall and next year’s $1.25 billion budget gap, a total of almost $2 billion when factoring in over-expenditures and other contingencies.

The solutions to the City’s financial crisis will be ugly.  But after all of the posturing, the City will have to resort to furloughs, across the board layoffs, and other financial gymnastics, including the issuance of billions in pension obligation bonds, a risky financial maneuver.

Will the City Council make the hard decisions necessary to protect the financial integrity of our City?  Or will they continue to kiss the rings of the campaign financing leaders of the City’s public sector unions?