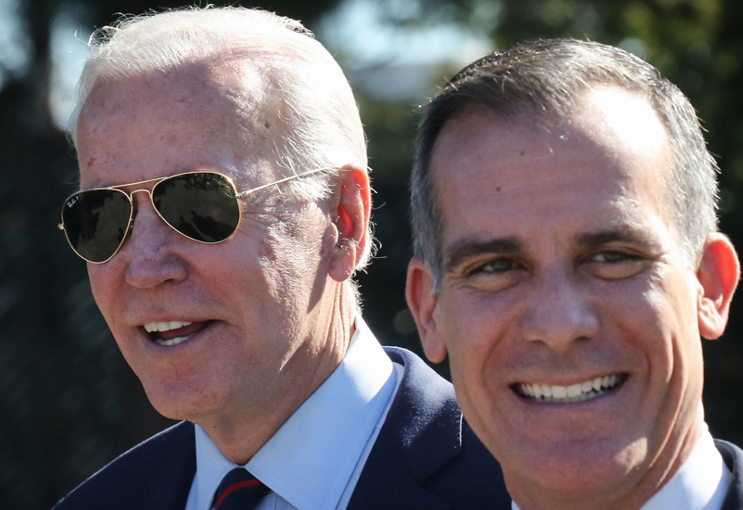 LA WATCHDOG--Will he or won’t he go to Washington to be a member of the Biden Cabinet has been the topic of considerable speculation and comment.

But what has not been discussed is who will succeed Mayor Eric Garcetti if he decides to depart for greener pastures. According to Section 243 of the City Charter (see below), the President of the Council, in this case Councilwoman Nury Martinez, shall act as Mayor of the City.  But given that that the Mayor’s term is for another two years, the concept of an acting mayor is not practical.

Under Section 409 of the City Charter (see below), the City Council may (not shall) call for a special election for the purpose of filling the vacancy for the remainder of the unexpired term.  Not only would a special election be very expensive for our cash starved City, it would be a huge distraction for the City that is coping with a $700 million ‘budget gap” for this year and a river of red ink for many years into the future.

Also under Section 409, the City Council may also appoint a person to be Mayor for the remaining two years of Garcetti’s term.  But who to appoint?

There is no shortage of ambitious Councilmembers who have their eye on the Mayor’s office. There is the newly elected and ethically challenged Mark Ridley-Thomas. There is also newly elected Kevin de Leon who is burdened by the Sacramento Sleaze factor and has disrespected Neighborhood Councils and their stakeholders. There are rumors that Joe Buscaino and Paul Krekorian may be interested.  And Supervisor Janice Hahn who would love to follow in the footsteps of her beloved father and brother.  The City Council will also have to deal with identity politics, much in the same way that Governor Newsom is being pressured by numerous interest groups regarding his appointment to replace VP-Elect Kamala Harris in the US Senate.

But more than likely, the City Council will be too divided and will not be able to appoint a person who wants to be reelected Mayor in 2022.

The alternative is to appoint a person who would agree not to run for Mayor in 2022, a neutral party who has a working knowledge of the City and City Hall.

Termed out former City Council President Herb Wesson will no doubt be interested.  But is he too tainted by the corruption scandals involving Jose Huizar?  And would he be willing to follow up on David Ryu’s recommendations on campaign finance and land use reform?

Wendy Greuel may be an acceptable alternative given her experience as a Councilwomen and City Controller.  She would be the first woman mayor, a definite plus in today’s environment.

There are many others, including former Councilmembers Bernard Parks and Jan Perry, former CAO Miquel Santana, and former mayors Hahn and Villaraigosa. But my favorite, hands down, is our own Mr. Los Angeles, former Councilman Tom LaBonge whose 40 years of service with the City makes him the most qualified interim appointment to be the Mayor of Los Angeles.

Sec. 409.  Filling Vacancies in the Offices of Mayor, City Attorney, Controller and Member of the City Council.

Vacancies in the offices of Mayor, City Attorney, Controller and members of the City Council shall be filled by appointment or election in the manner set forth in this section.

(a)   Appointment.  The Council may fill a vacancy by appointing a person to hold the office for the portion of the unexpired term remaining until the next second Monday in December of an even-numbered year.  If any portion of the term remains after that date, the Council shall also call a special election or elections to fill the remainder of the term, and shall consolidate the election with the primary nominating election and general municipal election next following the appointment.  If a vacancy is filled by appointment after the first date fixed by law for filing a Declaration of Intention to become a candidate at the next primary nominating election, the person appointed shall hold the office for the remainder of the unexpired term.

(b)   Special Election.  The Council may call a special election, and special runoff election, if necessary, by ordinance for the purpose of filling the vacancy for the remainder of the unexpired term.  The Council shall provide in the ordinance for the consolidation of the election with any other election and for the procedure for nominating candidates, including the amount of the filing fee, if any, to be paid by candidates and other matters pertaining to the election.  The Council also may appoint a person to hold the office temporarily until the vacancy election is conducted and the election results are certified and declared.