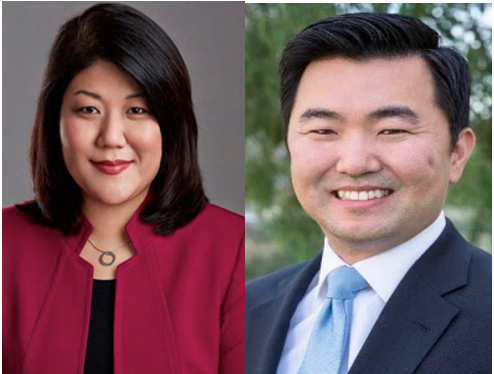 LA WATCHDOG--An elected official’s experience may work in his or her favor as is the case for the incumbent David Ryu in Council District Four.

But sometimes the past comes back to haunt a politician as is the case with the ethically challenged County Supervisor Mark Ridley-Thomas who is looking to succeed Herb Wesson in Council District Ten.(Photo above: Grace Yoo and David Ryu.)

In CD 4, David Ryu is in a runoff with Nithya Raman, a resident of Silver Lake.  Over the past five years, Ryu has been a leader in the fight against pay-to-play corruption that has infected the City Council.  He has sponsored campaign finance reform despite the opposition of many members of the City Council.  He has proposed to eliminate the ability of the City Council to assert itself into land planning decisions by recommending a ballot measure to delete Section 245 (e) from the City Charter.  He also has proposed the establishment of an independent Office of Anti-Corruption and Transparency to oversee land use decisions.

Ryu has also done more for the homeless than any other member of the City Council.  As a result. CD 4 has more bridge housing and permanent supportive housing than in any other Council District.  He also has an excellent understanding of the homeless problem because of his experience in directing a homeless and mental health services center in South LA.

Finally, he has been a leader in standing up to the efforts of the State to insert itself into our land use decisions that would have been highly detrimental to our single family neighborhoods.

His opponent, on the other hand, has endorsed the State’s efforts to determine our land use policies as she has supported the agenda of Abundant Housing LA, an organization that supports the “Build, Baby, Build” agenda.

Raman is also a proponent of Defunding the Police as she supported Peoples’ Budget LA that would allocate only 1.6% to law enforcement and policing.  Heaven help us.

As newcomer to LA as a result of her husband’s Hollywood connections, Raman does not understand our City or culture. Furthermore, she is way to the left of Ryu (and that is saying something!) and is endorsed by the Democratic Socialists of America, the largest socialist organization in the country.

In CD 10, Attorney Grace Yoo is challenging Mark Ridley-Thomas, a union backed, professional politician who has had a number of ethical lapses that have been well-publicized in the Los Angeles Times.  These include a $100,000 donation to USC from his campaign funds to finance his #MeToo son’s employment. Once this stunt hit the papers, his son was fired.

There are also allegations regarding the questionable use of millions of dollars in his less than transparent political and County slush funds. There is also the issue of the County footing the bill to convert his garage into a home office.  He also managed to cost the County $1.35 million because of his illegal use of County funds to promote Measure H in 2007.

While Ridley-Thomas is beholden to the public sector unions (as indicated by over $550,000 in contributions to Independent Expenditure Committees supporting him), Grace Yoo is independent of the corrupt political establishment.  Rather, she will be a breath of fresh air, willing to fight for transparency and against the pay-to-play culture that pervades City Hall.

Interestingly, Yoo was active in opposing the 2010 gerrymandering of the Council Districts that was orchestrated by Councilmen Herb Wesson and Eric Garcetti that resulted in Jose Huizar being able to extort millions from DTLA developers.

Ryu has earned our vote.  Grace Yoo is a vote for integrity.  And together, they will lead the fight for transparency and against corruption at City Hall.