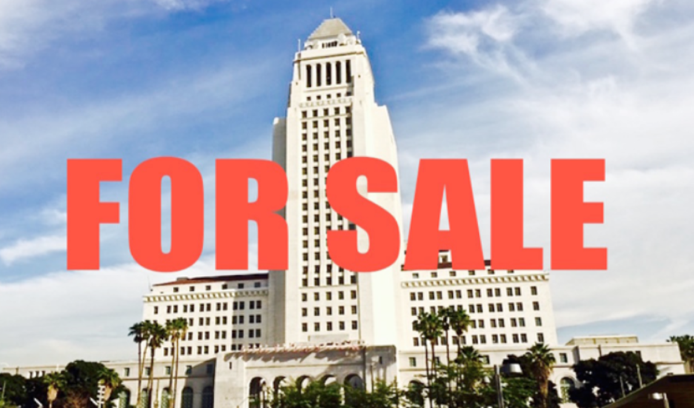 LA WATCHDOG--The Mayor and the City Council have once again entered into an arrangement with the politically powerful leaders of the public sector unions that is not in the best interests of the City of Los Angeles and its four million residents.

Under the recently approved Separation Incentive Program, retirement-eligible civilian employees will receive a lump sum payment of $7,500 plus a payment equal 2% of the employee’s salary times the number of years of service.  This payment may not exceed $80,000.

Assuming the maximum of 2,850 employees participate in the Separation Incentive Program, the cost to the City is expected to be $28.5 million this year and $128.6 million next year, a total of $157.1 million.

According the City Administrative Officer, the savings will be almost $59 million this year.  The savings for next year is not available, but than likely it will be in the range of $30 million after the back end payment to retirees of $128.6 million.

While the Separation Incentive Program is designed to lessen furloughs on 16,000 civilian employees, our cash strapped City does not have $157.1 million to satisfy the demands of the campaign funding leaders of the public sector unions.

While the City has adopted the Mayor’s Proposed Budget, the revenue projections are expected to be off by $200 to $400 million according to the Office of Finance and Controller Ron Galperin.  Furthermore, the Reserve Fund is and will be under significant pressure and is now about $100 million below its minimum level of $330 million.

According to the Chief Legislative Analyst, “the City’s first priority should be to maintain the City’s fiscal integrity …. and until there is greater certainty with City revenues and expenditures, we urge caution in incurring new or additional expenditures.”

A better alternative for the City and its fiscal integrity is for the City to continue with the planned furloughs of its 16,000 civilian employees who already have generous salaries and benefits.  Furthermore, if the furloughs do not provide enough savings, the City, like the private sector, could resort to temporary layoffs until the City’s revenues bounce back.

The Separation Incentive Program will also result a permanent brain drain, a loss of institutional memory, and major gaps in management.  If 2,850 employees retire early, they represent 8.2% of the City’s work force, but 17.8% of the 16,000 employees of the impacted departments, creating a huge hole in management.  This certainly was the case when the City executed its Early Retirement Incentive Program in 2009 that resulted in the early retirement of 2,400 City employees.

While the Separation Incentive Program is intended to lessen or eliminate the need for furloughs, furloughs are the result of the budget busting labor agreements that Mayor Garcetti and the City Council approved.  So the odds that our corrupt Mayor and City Council will stand up to the unions and do what is in the best interests of the City, its fiscal integrity, and its residents are slim to none.

A question: Would Los Angeles be better served by investing $157.1 million in the underserved communities of our City?