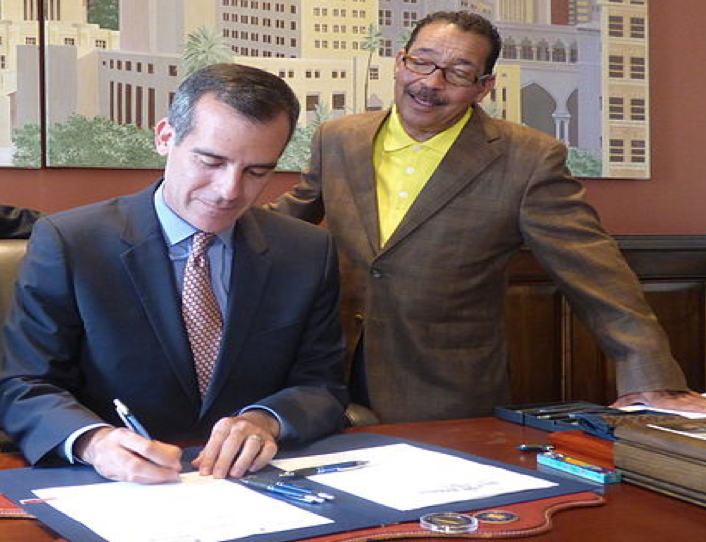 LA WATCHDOG--“I always say that budgets are a statement of our values. But this year, it is also a document of our pain.” Mayor Eric Garcetti, April 19, 2020

There will lots of discussion and even more debate over Mayor Eric Garcetti’s Proposed Budget, especially as it relates to the impact of the Virus on the City’s seven economically sensitive revenue streams and the mandate to balance the budget.

But the pain has already been inflicted, not by the Virus, but by the budget busting labor agreements that were approved behind closed doors by the Mayor and the Herb Wesson led City Council.

These budget busting labor agreements not only blew a $200 million hole in this year’s budget but created a river of red ink for the next four years.

According to the Four-Year General Fund Outlook, employee compensation for the fiscal year beginning on July 1 will increase by $227 million, $109 more than the projected growth in revenues of $118 million.

This shortfall has resulted in furloughs and a hiring freeze that will “save” $110 million.  There will also other “efficiencies and reductions in services” to offset the increase of $75 million in other personnel expense (pensions, health and dental, and workers’ compensation).

And in the following year (FY 2021-22), the City is looking at a deficit of $272 million, in large part because of an increase in personnel expense of almost $500 million, including a $327 million “adjustment” to employee compensation.

Over the following four years (July 1, 2021 to June 30, 2025), the City’s Four-Year General Fund Outlook is projecting a cumulative budget “gap” of almost $1.4 billion, including almost $400 million in the final year.

But even this massive shortfall is understated because it does not include an estimated $500 million in future raises once the existing contracts for City employees expire.  These new contracts will increase the budget deficit to $1.9 billion over the four-year period.

You can just imagine the pain that these shortfalls will inflict on Angelenos over the four years.

But the pain that we are experiencing this year caused by the budget busting labor contracts may be heightened by the Virus and its negative impact on the City’s seven economically sensitive revenue streams.  This may very well result in a revenue shortfall of $200 million based on Controller Ron Galperin’s Revised Revenue Forecast.

Unfortunately, this budget is a statement of the values of Mayor Eric Garcetti and the City Council.  They have placed the interests of the public sector unions ahead of those of ordinary Angelenos.  And their fiscal irresponsibility has resulted in a Structural Deficit far out into the future, a Service Deficit where our streets and the rest of our deteriorating infrastructure are neglected, and Intergenerational Theft where future generations of Angelenos will be burdened with tens of billions in unfunded pension liabilities and deferred maintenance.

Stay tuned.  On May 11, the Budget and Finance Committee will discuss the Mayor’s Proposed Budget, its underlying assumptions for revenues and expenditures, and feedback from departments and the public sector unions.   It will not be pretty.