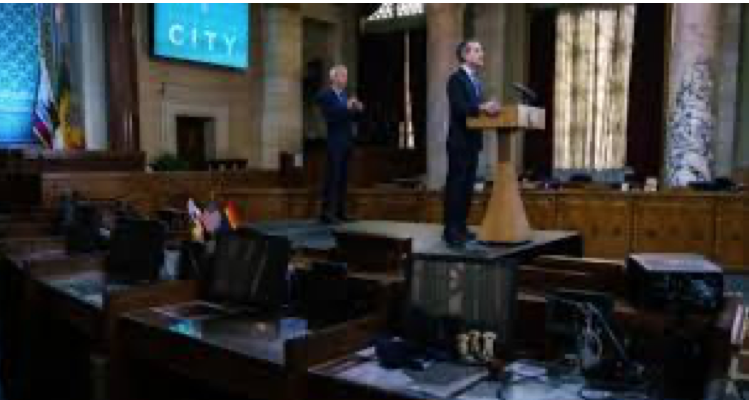 LA WATCHDOG--Governor Gavin Newsom and Mayor Eric Garcetti have prioritized the lives of Californians and Angelenos over the premature opening of our economy unless there is adequate testing, tracking, and monitoring; proper social distancing; the protection of vulnerable communities; surge capacity at hospitals; continued research and development; and the development of adequate guidelines in the case there is a resurgence of the virus.

As part of his efforts to limit the spread of this highly contagious and deadly virus, Mayor Garcetti recently extended his “Safer at Home” order until May 15.  And despite pressure from people who want to lift some, many, or all of the Covid-19 restrictions, there does not appear to be a willingness on the part of Garcetti and Newsom to loosen any of the restrictions at this time.

Yet Garcetti’s $6.7 billion Proposed Budget assumes the “current Safer at Home order is projected to end in May and the estimated receipts for 2020-21 and the revenue growth for the outgoing years reflect this assumption.” But this is not a valid assumption as the restrictions are expected to remain in place for several more months, at a minimum, because of the medical community’s concern about a possible resurgence of the virus.

A more realistic budget would be in the range of $6.5 billion, about $200 million lower than the Mayor’s Proposed Budget of $6.7 billion.  This new estimate is more in line with Controller Ron Galperin’s Middle Revised Revenue Forecast and its underlying assumptions.

There are two major differences that account for the variation.  The first is that the revenue from the seven economically sensitive revenue taxes is about $100 million less than the Garcetti budget.  The shortfalls are primarily with the business, documentary, and parking related taxes.

[The other economically sensitive revenue sources that are consistent with the Proposed Budget are property (which shows a 9% year over year increase) , utility (primarily DWP), sales, and hotel taxes.]

The other major difference is a $100 million swing in the broad category known as Licenses, Permits, Fees, and Fines.  In its Proposed Budget, the City is projecting revenue of $1.335 billion, a $108 million (9%) increase from the previous year.  But this source of income from 15 Special Categories and 40 Departments is highly discretionary and subject to manipulation because the City has the ability to move employees to Special Funds, transfer cash from idle funds, or increase fees.  But these games are not sustainable as was seen during the Great Recession.

Last year, the Mayor and the City Council showed they cannot be trusted because they failed to include the devastating impact of the budget busting labor agreements with the police and firefighters in the City’s Adopted Budget.  And once again, the Mayor appears to be pulling a fast one by overstating revenues which will come back to haunt not only City Hall, but all Angelenos.

Obviously, the concept of “Plan for the Worst, Hope for the Best” is not in the City’s playbook.