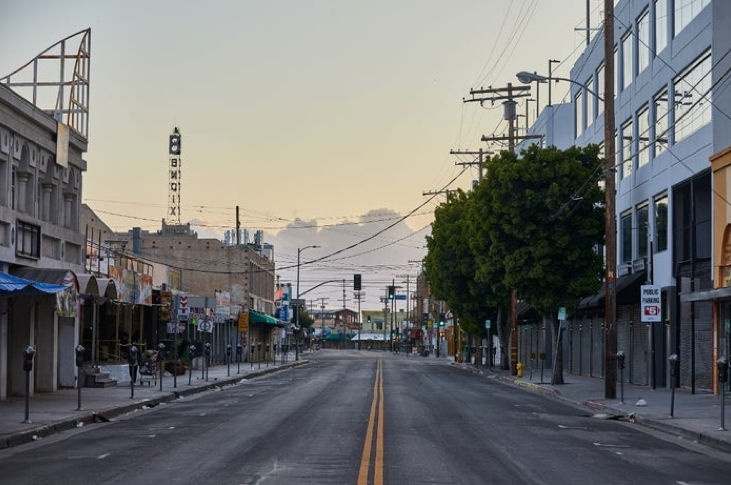 LA WATCHDOG--“Only when the tide goes out do you discover who's been swimming naked.”  Warren Buffett, Chairman and CEO of Berkshire Hathaway

(Photo above: Empty LA street is reminder of damage Coronavirus has done to city budget.)

City of Los Angeles Controller Ron Galperin released his Revised Revenue Forecast on Wednesday in which he predicted that revenues for this fiscal year ending June 30 will be $231 million lower than his previous estimate on March 2.

He also predicted that revenues for the upcoming fiscal year beginning July 1 will decline by as much as $600 million* from his March estimate.

The budget implications are frightening, especially after the Mayor and the City Council gave away the store when they approved budget busting labor agreements that will cost the City and its residents $1.6 billion over the next 4½ years.

For the current fiscal year, the balanced budget was obliterated by the new labor agreements and is now was estimated to be about $200 million in the red.  After adjusting for the negative impact of the virus, the shortfall is more than $400 million.

For the upcoming fiscal year, the projected surplus of $33 million was wiped out by the new labor agreements, resulting in a shortfall of $200 million according to the City Administrative Officer.  After adjusting for the negative impact of the virus, the projected shortfall is almost $700 million.

Overall, the City needs to solve a “budget gap” of $1.1 billion for this year and next year.

We will be getting answers (and plenty of spin) as to how Mayor Garcetti will “balance” the budgets for this year and next year on Monday, April 20 when he submits his Proposed Budget to the City Council.  And it will be not be pretty.

[*Note: Galperin also developed alternative cases that showed revenue declines of $200 million and $350 million. Increases in expenditures were not considered in all cases.]