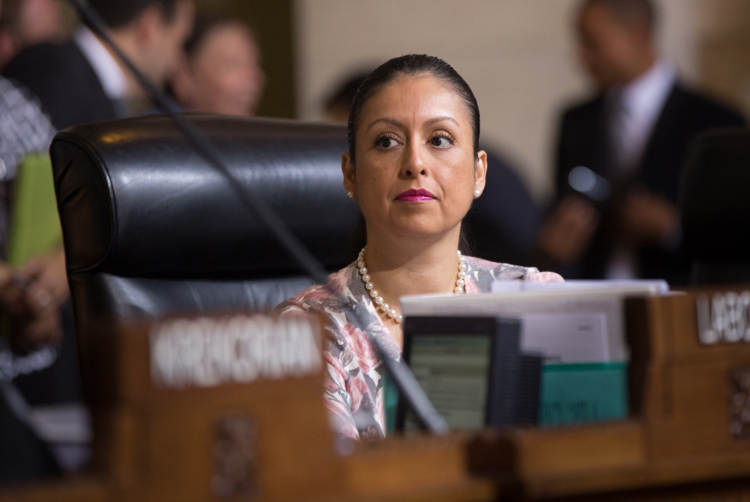 LA WATCHDOG--One day, hopefully, sooner or later, we’ll knock down the new coronavirus that’s got people rattled.  But there is no vaccine for the virus that infects City Hall.”  Steve Lopez, Los Angeles Times, March 11, 2020

Needless to say, Coronavirus is the number one priority for the City of Los Angeles.  But this does not mean that we can ignore the pay-to-play corruption virus that is infecting City Hall. (Photo above: City Council President Nury Martinez.)

In March, former City Councilman Mitch Englander “agreed to plead guilty to a federal criminal charge stemming from his obstruction of a public corruption investigation related to his acceptance of gifts.”

And in 2018, the FBI and IRS raided the offices and home of Jose Huizar and issued search warrants on Councilman Curren Price, Deron Williams, Chief of Staff to Council President Herb Wesson, Ray Chan, a deputy mayor appointed by Mayor Eric Garcetti, Joel Jacinto, a member of the Board of Public Works appointed by Garcetti, and selected real estate developers.

But who is responsible for overseeing City Hall? Are all the members of the City Council and Mayor Eric Garcetti deaf, dumb, and blind to the blatant corruption that is obvious to even the most casual of observers?

How could the Councilmembers miss the corruption associated with the 27 story, out of character, luxury high rise on Catalina and 8th Street in Koreatown that was opposed by the community and dinged by the Area Planning Commission and the Planning Commission, but approved by the City Council when it asserted jurisdiction over the matter.  How could they have missed the $1.25 million in payments to the Mayor’s Affordable Housing Trust Fund and a slush fund controlled by Wesson?

And what about the Sea Breeze development in Harbor Gateway that was approved with the help of over $600,000 in laundered campaign contributions?

The primary responsibility for overseeing City Hall belongs to the President of the City Council and the Mayor.

The President of the City Council approves all the items on the City Council agenda and those of its committees, including the Planning and Land Use Management Committee that has oversight for real estate developments and digital billboards and sign districts.  But under Wesson, who was City Council President from 2012 to 2019, many controversial and questionable real estate and billboard deals were approved under his watch.

And where was Eric Garcetti who was the President of the City Council for six years and now the Mayor of our City?  Where was his bloated staff of over 250 people?

And why hasn’t the Mayor pushed to properly fund the Ethics Commission or appoint a watchdog to oversee the blatant pay-to-play culture that infects City Hall?  Or maybe the Mayor should be our watchdog, setting a high moral and ethical standard, calling out the corruption.

While we can point fingers at the many who are to blame for this corruption, now is the time for Council President Nury Martinez and Mayor Eric Garcetti to assert control and work with the FBI and the United States Attorney’s Office to expose the pay-to-play scams and the guilty parties, whether they be elected officials, real estate developers or billboard operators, or lobbyists.