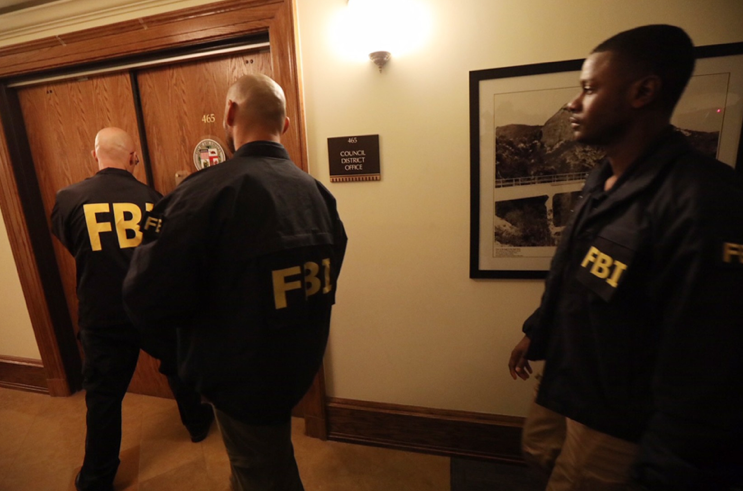 LA WATCHDOG--In November of 2018, the FBI and IRS raided the offices and house of Jose Huizar in connection with its investigation of pay-to-play corruption at City Hall.

Two weeks ago, the United States Attorney’s Office indicted former City Councilman Mitch Englander on charges of witness tampering, lying to Federal authorities, and obstruction of justice.  This was in connection with an all-expense paid junket to Las Vegas and an “ongoing federal criminal investigation into public corruption throughout the City of Los Angeles related to multiple suspected pay-to-play schemes.”

And on Thursday of last week, Justin Jangwoo Kim, a real estate appraiser and consultant and a campaign fundraiser, agreed to plead guilty to a federal bribery charge involving Jose Huizar (the unnamed Councilmember A is assumed to be Huizar), an unnamed developer (the “Developer”) of a residential complex in Huizar’s district that was being held up by a frivolous CEQA lawsuit filed by a Labor Organization, and the exchange of $500,000 in cash to make the lawsuit go away.

Also mentioned in the government’s filing were unnamed parties, including a member of Huizar’s staff (the "Staffer”), two lobbyists, and a Labor Organization and its Executive Director.  Also not named was another member of the City Council.

But there are many open points and questions raised by the government’s filing.

When the Developer asked for help in facilitating the City’s approval of his project, he was told that Huizar would not work for free and would require a “financial benefit.”  The initial ask from the lobbyist for the Labor Organization was $1.2 to $1.4 million.  The Developer agreed to pay Huizar $500,000.  This implies that there was an ongoing market, or a price to facilitate “pay-to-play” transactions.

In addition, the Developer’s project appears to have been approved, raising the question of what did the Labor Organization, its Executive Director, and their lobbyist receive in return for allowing the residential project to continue.  There is a large gap between the $1.2 to $1.4 million ask and the $500,000 cash payment.

There is also the question of how much of the $500,000 in cash did Huizar receive?  Of the initial payment of $400,000 in March of 2017, Kim, the bag man, and the Staffer skimmed $200,000 off the top. The Staffer then delivered $200,000 to Huizar, who then directed the Staffer to stash the cash in his residence.  When Huizar asked the Staffer to fork over the $200,000 in October of 2018, the Staffer stiffed Huizar.  Is there no honor among thieves or was the Staffer operating under directions of the Feds?

It appears that Huizar received nothing to line his pockets or to help finance his wife’s campaign to replace him on the City Council, a delicious outcome that only happens in Hollywood.

Bagman Kim has agreed to cooperate with the Feds as part of his plea agreement.  But it also appears that others involved in this pay-to-play transaction have agreed to cooperate or have been compromised by cooperating parties or wiretaps or other means of surveillance.

Are the dominos beginning to fall? Are the rats deserting the ship?  Will City employees take the fall for the Mayor, the City Council President, or the Councilmembers?  Are developers making a bee line to the FBI’s field office looking for deal? And have any of our elected officials flipped?