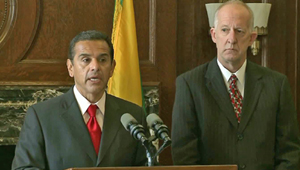 DWP RATES ARE GOING UP BUT …  - At the Tuesday meeting of the Board of Commissioners of our Department of Water and Power, General Manager Ron Nichols informed the Board that the DWP intended to increase our water and power rates.

According to the timetable, the unspecified rate increases would take effect in November, but only after a thorough public and transparent review that would begin May 23.  This would include “stakeholder workshops and briefings” as well as working with the City Council and its Energy and Environment Committee.

This public review will need to include a thorough analysis of the DWP’s Strategic Plan which calls for outlays of $60 billion over the next 10 years, $45 billion for the Power System and $15 billion for the Water System.  We will also need to get a better understanding of the Integrated Resources Plan and the Urban Water Management Plan and the impact on rates and the credit ratings of both the Water and Power Systems.

Ratepayers understand all too well that water and power rates are going to increase, in large part because of the call for renewable energy, the increased regulatory requirements, and the need to repair and maintain the DWP’s infrastructure.

At the same time, Ratepayers must be assured that their money is being used efficiently.  The recent announcement by General Manager Nichols that DWP is reducing operating costs by $440 million over the next three years is obviously a step in the right direction.

But Ratepayers need further assurances.  DWP needs to benchmark its operations and compare them to other regional utilities, both investor and municipally owned, and to other comparable city workers.  And Ratepayers need to get a better understanding of the IBEW Labor Premium, estimated to be over $250 million a year.

We also need a better understanding of the relationship between the DWP and the City, the pricing of any services, and the impact of Proposition 26 that requires the two-thirds approval of the voters for certain fees and taxes.

And, we also need a better understanding of the DWP’s pension plan and its unfunded liability.  While the actuarial unfunded liability is $1.6 billion (81% funded), the unfunded liability based on the market value of the assets is $2.6 billion (70% funded).  This assumes an Investment Rate Assumption of 7.75%, considerably higher than the 6% and 6.5% recommended by Warren Buffett and Wilshire Associates.

An integral part of the process will be the Energy and Environment Committee of the City Council.  Fortunately, the City Council has retained PA Consulting to provide an independent review of the proposed increases in our water and power rates.

PA Consulting is very familiar with DWP, having completed the Charter mandated Industrial, Economic, and Administrative Survey in February 2009.  More importantly, PA Consulting did a first class job in analyzing the Energy Cost Adjustment Factor in February 2010 and then working with the City Council throughout the Mayor induced ECAF Fiasco.

But where are the Ratepayer Advocate and the Office of Public Accountability?

On March 8, almost 80% of the voters approved Measure I that authorized the Office of Public Accountability and the Ratepayer Advocate, to be effective July 1.  But during the last two months, little progress has been made other than a six page memo dated April 25. Compare this to the three weeks that it took the City Council to approve Measure B, the $4 billion plus Solar Initiative boondoggle that was a payback to Union Bo$$ Brian D’Arcy, the campaign funding, public be damned business manager of the IBEW, the DWP’s domineering union.

This is the same Union Bo$$ D’Arcy who pressured the IBEW Eight (Garcetti, Hahn, Zine, Wesson, Alarcon, Reyes, Huizar, and LaBonge) to water down Measure I and veto the ballot measure that would have allowed the City Council to remove the DWP General Manager or any Commissioner with a two-thirds vote.

While DWP customers understand that rates are going to go up, the Ratepayer Advocate needs to represent the underrepresented and underfunded Ratepayers to make sure that their interests are duly considered and that they are not going to be shafted.

On the other hand, environmentalists have well funded organizations that rake in hundreds of millions of dollars of year in revenue to employ their paid advocates.  And the IBEW is certainly well represented at City Hall, especially since the IBEW was the major contributor to Mayor Villaraigosa and Controller Wendy Greuel.

Before approving any rate increases, the Office of Public Accountability and the Ratepayer Advocate must be established in a proper manner so that they can duly represent the Ratepayers. The DWP needs the trust and confidence of the Ratepayers and all Angelenos.

(Jack Humphreville writes LA Watchdog for CityWatch He is the President of the DWP Advocacy Committee and the Ratepayer Advocate for the Greater Wilshire Neighborhood Council. Humphreville is the publisher of the Recycler -- www.recycler.com. He can be reached at:  lajack@gmail.com)             -cw