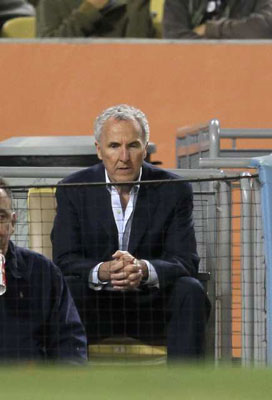 DODGER DOLLAR DILEMMA - The Dodgers once again do not have enough money to meet their $8.25 million payroll at the end of May, according to Bill Shaikin of The Los Angeles Times, the leading voice on the financial woes of the Dodgers and their beleaguered 50% owner, Frank McCourt, the “irresponsible” Boston Parking Lot Attendant. (Link)

This crunch is after Frank borrowed $30 million from Fox Sports last month to meet the two April payrolls and the first payroll in May. The Fox Sports loan was after his family’s Boston based business, McCourt Construction (www.McCourtConstruction.com), prudently refused to extend credit to its wayward son.

But why are the Dodgers short of cash, especially now that the season has started and the cash is rolling in from attendance, concessions, and parking? For the first 18 games, while attendance is down 15.5%, the 650,000 fans generated revenues in excess of $25 million.

There is a very simple answer.  Frank has squandered all of the money received in advance from the season ticket sales to pay interest and principal on over $425 million in debt and support his Big Dog lifestyle.  And more than likely, he has also spent any advances related to broadcast rights and advertising sales.

To give you an idea of how much money Frank blew, if the Dodgers sold 20,000 season tickets for 81 home games at $20 per game, the team would have received over $32 million before the start of spring training.

The parking revenues are not available since they are already pledged to secure borrowings on the Chavez Ravine land, which borrowings were part of the over $100 million that Frank looted from the Dodgers.

But what is truly amazing is that Frank has the audacity to question why the Commissioner of Baseball inserted Tom Schieffer to monitor the business and financial affairs of the Dodgers and its related assets.

But there is some good news for Dodger fans.  Now that Frank has depleted the Dodgers’ treasury of money that it is needed to pay tomorrow’s payroll and expenses, money that it has not “earned,” this trustee of Georgetown University has demonstrated to the world that he is morally and fiscally bankrupt, does not deserve the trust of Major League Baseball, is “not in the best interest of the game,” and is unfit to own the City’s beloved Dodgers.

But as Frank knows, life is full of second chances.  It is the American way. So if life gets really tough for The Boston Parking Lot Attendant, he can still hang out with the Big Dogs, parking their cars at Dodger Stadium, or even better, at Fenway Park.

(Jack Humphreville writes LA Watchdog for CityWatch He is the President of the DWP Advocacy Committee and the Ratepayer Advocate for the Greater Wilshire Neighborhood Council. Humphreville is the publisher of the Recycler -- www.recycler.com. He can be reached at:  lajack@gmail.com)             -cw