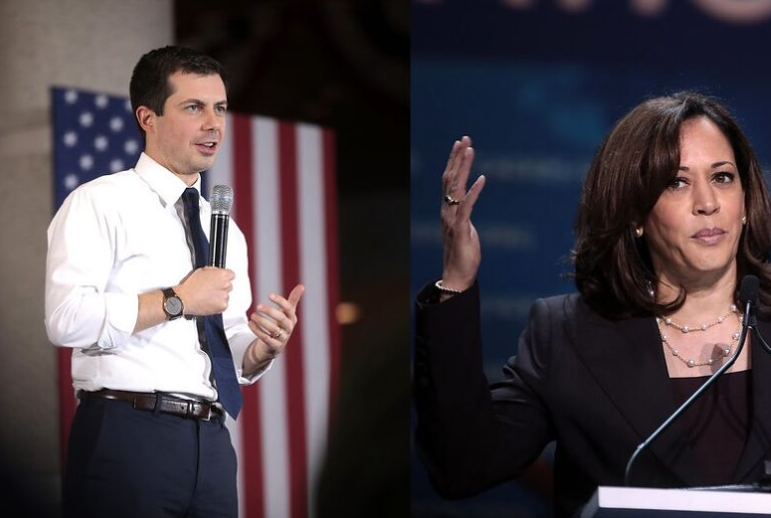 WEST WING POLITICS - In a lengthy profile documenting the dysfunction in Vice President Kamala Harris’ office, CNN has revealed that Harris aides are growing jealous of the White House’s relationship with out Secretary of Transportation Pete Buttigieg.

Harris’ staff feel that Buttigieg is getting preferential treatment by President Joe Biden while the Veep has been mostly sidelined.

Buttigieg adopted newborn twins with his husband, Chasten, and took paternity leave to care for them and help around the home. One of the children, Gus, was hospitalized for three weeks with a non-COVID-related respiratory infection. Gus was released from the hospital earlier this month.

Right-wing conservative blowhard Matt Walsh said it was “absurd… luxury” for public employees like Buttigieg to receive time off to care for his infants on the taxpayer dime. Fox News host Tucker Carlson said that Buttigieg and his husband took paternity leave to try and “figure out how to breastfeed.”

Both men accused Buttigieg of causing the supply-chain problems plaguing the American pandemic recovery, while the problem is actually people who haven’t been vaccinated getting sick or spreading the virus. Both Walsh and Carlson have railed against coronavirus prevention measures that would help to kickstart the economy.

The White House defended Buttigieg. Paid parental leave is a priority of the administration and part of Biden’s Build Back Better plan currently being negotiated.

“It’s hard to miss the specific energy that the White House brings to defend a white man, knowing that Kamala Harris has spent almost a year taking a lot of the hits that the West Wing didn’t want to take themselves,” a former Harris aide told CNN.

Harris has been given important and taxing assignments by the president that many of her supporters feel are setting her up for failure. Biden aides, however, say she has been given responsibilities that would prepare her to become president herself, but the vice president’s staff is failing her by putting her in awkward and unfavorable situations that could have easily been avoided.

Her supporters feel she’s gone without any backup from the White House when conservative pundits and social media users launch ugly attacks on her and Buttigieg got special treatment. White House staff told CNN that the main difference is that Buttigieg had done nothing wrong by taking time to care for his children; Harris’ issues are of her own making.

They cite the time she didn’t push back against a student who accused Israel of “ethnic genocide” and another when she awkwardly laughed when reporter Lester Holt asked why she hadn’t gone to visit the southern border. Social media users regularly smear her for innocuous things that have bad optics.

In an interview on The View, the show’s panelists asked Buttigieg what he thought about right-wing attacks on his paternity leave.

Buttigieg called their negativity “unfortunate” but added, “In a way, maybe some good comes out of it too because it’s helped us have a conversation about parental leave.”

“In [Carlson’s] case, I guess he just doesn’t understand the concept of bottle-feeding let alone the concept of paternity leave,” Buttigieg said on an appearance on MSNBC.

“What we have right now is an administration that’s actually pro-family,” Buttigieg continued, highlighting Biden’s “human infrastructure” proposals to help fund childcare, elder care and other needs of working parents.

“This attack is coming from a guy who has yet to explain his apparent approval for the assassination of Harvey Milk, so obviously, we know there’s some dark places where some of these attitudes come from,” Buttigieg said, referencing the fact that Carlson’s 1991 yearbook from his senior year at Trinity College in Hartford, Connecticut listed him as a member of the “Dan White Society”, a group that ostensibly honored the coward who assassinated gay politician Harvey Milk.

“But I also note that [Carlson] doesn’t speak for the country,” Buttigieg added. “I don’t think that even speaks for most people on the other side of the aisle from the party that I belong to.”

(Bil Browning is the Editor-in-Chief of LGBTQ Nation. His personal papers and LGBT activism memorabilia are included in the Smithsonian’s National Museum of American History archives. Find him on Twitter at @bilerico.)