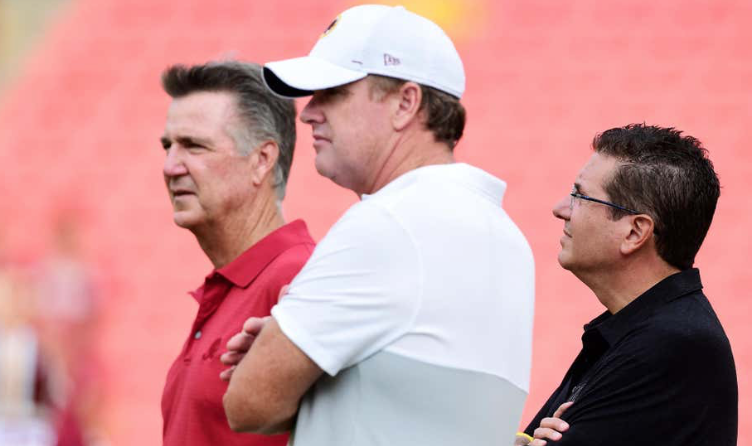 But it’s really about the NFL.

According to the Los Angeles Times, during the 2011 NFL lockout, Schefter sent Allen a draft of a story he was writing about details of negotiations (the same lockout where Gruden used racist slurs to describe NFL Players Association Executive Director DeMaurice Smith). Unbeknownst to anyone, Allen had become an anonymous source for Schefter’s reporting on the negotiations between the majority-Black NFLPA and the NFL’s 100 percent white owners (Several months later, Shahid Khan would become the first non-white owner of an NFL franchise).

“Please let me know if you see anything that should be added, changed, tweaked,” Schefter wrote to Allen. “Thanks, Mr. Editor, for that and the trust.”

While this may seem innocuous to some, this breach of journalism ethics set Journalism Twitter afire. Schefter eventually admitted that he was wrong to have a source essentially have the final approval of his story.

Think about it—during contentious secret negotiations between the most powerful league in sports and the majority-Black players union led by a Black man, Schefter allowed a representative of the white billionaire owners to dictate the public narrative. Of course, most reporters curate personal relationships as sources, and Schefter is no different. But tilting the table ever-so-slightly in favor of the white men in their negotiations with the Black bodies that produced $14 billion in annual revenue in 2011 gave the white men an advantage. Although this exchange perfectly fits the definition of the word conspiracy, there is another, more insidious part of the narrative that everyone seemed to overlook.

Perhaps this story isn’t even about Adam Schefter, Jon Gruden or the ethics of journalism. Maybe it’s a story about what happens when whiteness, privilege and systemic racism collide. Or, it might just be an example of a conspiracy theory that turned out to be an actual conspiracy.

Some of the emails that uncovered Gruden’s comments came from a weird lawsuit about Jeffrey Epstein, Washington team owner Dan Snyder and a former employee. At the time of Gruden’s infamous racist email, he had worked with his friend Allen for more than a decade before joining ESPN’s Monday Night Football broadcast team, so it was understandable that the buddies had private conversations via email. In 2014, Allen even hired Jay Gruden, Jon Gruden’s brother, to coach the Washington team. In an August 2016 exchange about Colin Kaepernick’s decision to sit during the national anthem, Jon Gruden casually told Allen that the 49ers should “cut this fuck.”

“I’ve expressed my OUTRAGE,” Allen replied, to which Gruden responded: “Good for you.”

The president of a football team and his friend in the media sharing how much they hated Kaepernick doesn’t seem so outrageous. But who did Allen express his outrage to? And why were these buddies so comfortable sharing electronic racism on the team’s official email account? How did they know they wouldn’t get in trouble? Was it possible that the franchise’s work environment was so toxically racist that they could just email unambiguously bigoted remarks? Maybe there’s a reason they felt so comfy with slurs in their “sent” folder.

In October 2017, after Donald Trump suggested protesting players should be fired, the NFL owners met in New York to decide how to handle the situation. During the meeting, Cowboys owner Jerry Jones and Washington team owner Daniel Snyder “got angry with 49ers owner Jed York, one of the rare team owners to support the players’ protests, for not disciplining former San Francisco quarterback Colin Kaepernick when he started the movement,” the Washingtonian reports. As Jones gave an impassioned speech explaining why the league should take a stand against the demonstrations, Snyder reportedly mumbled out loud: “See, Jones gets it — 96 percent of Americans are for guys standing.”

What the hell? Even the owners didn’t know where Snyder found that made-up statistic. No poll has ever said that. In fact, a poll released a few days earlier showed that most Americans thought the protests were appropriate. Yet, for some reason, the narrative that the vast majority of people disliked the Kaepernick protests persists. Seven NFL executives even admitted to Bleacher Report’s Mike Freeman that they considered Kaepernick a traitor and that “90 to 95 percent of NFL front offices felt the same way they did.”

Where did they get their stats from?

The next year, three-quarters of the way through the 2018 season, Jon’s brother Jay was in trouble. His Washington team was 6-6 and his starting quarterback was injured. Then the backup quarterback went down. Football analysts agreed that the smart move was for Washington to make a playoff run by signing Kaepernick, who was not in the league at the time. After all, Kaepernick had played in a system that was nearly identical to Jay Gruden’s. Gruden’s offense was based on the offense Kaepernick ran when he led the 49ers to the Super Bowl. Even the fans expected it.

When Washington didn’t even consider Kaepernick, fans and sports reporters wondered why the team’s front office would choose to flush its season down the drain. Casual fans didn’t know that Snyder wanted Kaepernick out of the league all along. They were not aware that the team president had emails in his inbox calling for Kaepernick to be cut. They didn’t know the racist emails were from the coach’s brother. They had no idea that the coach’s brother would have sent Kaepernick packing for the crime of protesting. They didn’t even know that their coach’s brother had made racist comments about the man who negotiated the players’ salaries. Of course, a few of the fans had probably heard that lie about “96 percent of Americans are for guys standing,” but they probably didn’t know where that lie came from.

Here’s where things get interesting.

Buried in the salacious details of Gruden’s emails, was an email from Allen to right-wing host Mark Levin, whose radio show averages 11 million listeners per week. Years before Levin became one of the hosts who stoked the Capitol siege, Fox News debuted Levin’s television show Life Liberty & Levin in 2018.

In a later email unrelated to Gruden, from 2018, Allen told conservative talk show host Mark Levin that, “remember 90%+ of NFL players have never considered kneeling. The 10% of the players and owners are the issue (see [Eagles owner] Jeff Lurie & 49ers owner).”

“Good points, will hit some of this now,” Levin responded, presumably referring to his show.

“Thanks,” Allen wrote back. “This is so ridiculous it’s embarrassing.”

Yes, the Washington front office had been poisoning the well with the “everyone hates Kaepernick” narrative for years.

Again, the definition of a conspiracy is “a secret plan by a group to do something unlawful or harmful” and there is no evidence that any other team’s front office and ownership were as anti-Kaepernick as the Washington franchise. Except for the Dallas Cowboys. And the Houston Texans owner who railed against the “inmates running the asylum.” And those seven executives who spoke to Freeman. Plus, there was no way to definitively know if the NFL colluded against Black protesters, but there are a reported 10 million reasons why the NFL settled a collusion case with Kaepernick and Eric Reid. The only way we could know for sure is if the NFL released all 650,000 of those emails, which may be why the NFL refuses to do so.

However, there is also another backstory that may contextualize this entire thing.

As early as the 1600s, fraternal organizations would meet to vote on who they would allow into their secret cabal of rich white men. Because they wanted to keep their proceedings secret, instead of using paper, each member was given two marbles. If a member accepted the candidate, they would drop a white marble into a container. If they rejected him, they’d vote by dropping the black marble into the ballot box. Because the decision to admit a member had to be unanimous, the fraternity members didn’t need to collude to exclude a nominee. One individual could sink a candidate’s fate by casting a single dark-colored marble that everyone could easily spot and know the person had been denied...

Of course, the term is over 300 years old. Perhaps it’s time for this confederacy of racist dunces to change it to something more modern.

(Michael Harriot is the Senior Writer at TheRoot.com where he covers the intersection of race, politics, and culture.)