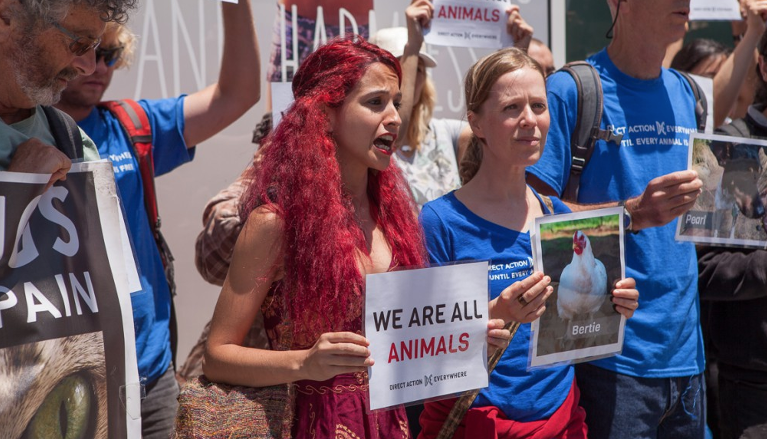 DC DISPATCH-Originally, this column was going to be about an animal rights group staging a high-profile protest at a Los Angeles-area meat packing facility.

However, thanks to a Berkeley news website, a more compelling corollary emerged. Namely, how did initial news reports omit several credible critics’ claims that this organization has serious allegations against it, including that it might be a sex cult?

Last month, members of a California-based group called Direct Action Everywhere, or DxE, were cited on charges related to criminal mischief at the Farmer John slaughterhouse in Vernon, a manufacturing suburb just a few miles outside of downtown LA.

Media coverage of this event made national headlines and drew attention from the likes of the Los Angeles Times and other mainstream news outlets. DxE also distributed their resulting videos widely, while also confirming news reports and updates to indicate that all 26 associates were released from custody.

The story had the hallmarks of a made-for-media event, including a 48-hour vigil. This dramatic gathering was reminiscent of protestors praying for a reprieve from a pending death penalty case.

But wait. Even a cursory Google search of the organization reveals a darker underbelly. There are several troubling allegations against DxE, including allegations of racial conflicts and cult-like behavior. It turns out that describing DxE as an animal rights group is akin to describing President Trump as a "real estate professional," – true enough, but it leaves out so much!

Perhaps "vegan activists" would be more appropriate, in that the group not only calls for abolishing the eating of meat, but also the elimination of the dairy industry, and even banning human pet keeping. As an animal lover and occasional carnivore, my impulse was to add more meat to the bare-bones reporting, so to speak.

Apparently, my instinct was not unique, because an investigative reporter at the Bay Area's Berkeleyside non-profit news website has published a deep-dive report. It raised many questions and drew more than 500 comments, many from supporters of the organization and some damaging information from its critics.

The B-Side (as locals sometimes call it) story focuses on the seemingly unlikely mayoral campaign of Wayne Hsiung, a DxE founder facing multiple felonies and several decades in jail for his animal-rights efforts (for the record: NOT because of any sex-cult charges or other allegations).

The story says: “. . .with Hsiung as DxE’s head — he said he stepped down from leadership in 2019 but continues to be a member — the nonprofit grew dramatically, both in Berkeley and around the world. There are now 54 active chapters in 20 countries, according to Matt Johnson, DxE’s Bay Area press coordinator."

Perhaps most alarming, given that we live in the time of Nxivm, Harvey Weinstein and Jeffrey Epstein, are very specific and detailed allegations that young girls are being groomed into what amounts to a sex cult. The most high-profile of these accusers actually operates a YouTube channel where she reads “grooming emails” she received from a group leader when she was only 17.

Also noted in the online back-and-forth is the fact that Texas-based animal rights icon and author Carol J. Adams has posted on her website that she was boycotting DxE.

Ms. Adams is refusing to even speak at any event where Hsiang or DxE members appeared. The reason, she said, is that she did not want to be part of attracting young women to an event where they might be recruited.  Some "veg festivals" have apparently taken similar positions. She outlines this in a very public posting here.

To be clear, and think what you want of DxE, it's hard not to admire some of the membership's dedication. This is not an "animal rights" group like PETA or the ASPCA. These guys are "all in." They may protest treatment of animals, but they do not seek more humane processes; they openly seek to ban meat and dairy consumption, as well as owning pets.

One takeaway from all this? It remains frankly startling that the Berkeleyside coverage runs so very much contrary to what I’d first encountered. It is time many of us realize, as Ms. Adams in Texas has apparently done, that we must begin with "believe the women."

It is deeply troubling when our media coverage becomes so cursory as to ignore that priority.