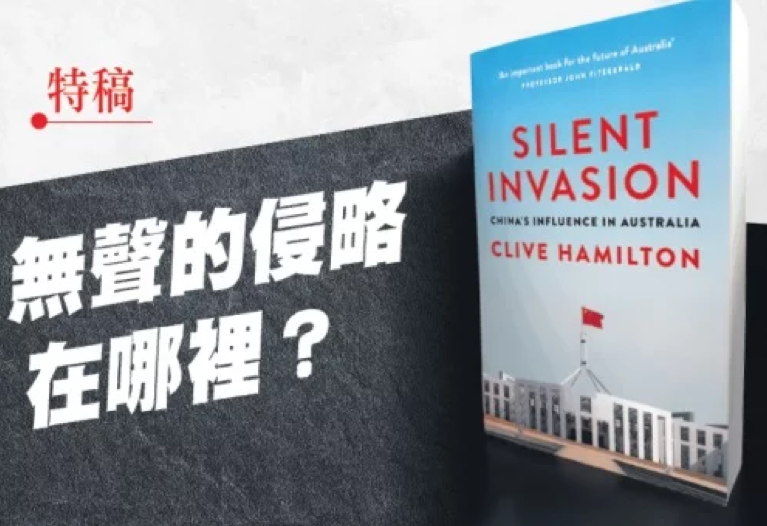 DC DISPATCH--Married to National Intelligence Officer Anthony Schinella, I had the benefit of receiving cutting edge reading recommendations from him.  My husband was an astute identifier and observer of stealth influences upon current events that are beneath the mainstream media radar, but warrant wide awareness of.

One such recommendation—presented as a gift—was a copy of the 2019 book Silent Invasion, by Clive Hamilton, which chronicles and analyzes China’s aggressive determination to bully, warp, and reshape Australian politics and culture in its favor.

That agenda is not just Australia’s problem, but has also been occurring—also quietly—throughout the African continent, as well.

My husband Tony and I often discussed China's increasing influence in America’s public domain, as well as in other countries around the world.

China was one of our shared interests, as he was half-Chinese and I received my MBA from a business school in Shanghai.

Our conversations could range from how the Chinese Security Services or PLA (People’s Liberation Army) had centralized its operations, to how they supported influence campaigns targeting universities, politicians, and public sentiment in Australia.

So while many of us in the United States have been preoccupied with Russian influence campaigns here, it turns out that the Chinese have been wreaking havoc on our ally Oz down under; and indeed the main threat to Australia's national security interests today come from its largest trading partner to the northwest: China.

In Clive Hamilton’s Silent Invasion, the diligent Australian professor chronicles China’s uneasy relationship with Australian commerce, its attempts to create an internal diaspora loyal to the mandates of Beijing, and the history of China’s political infiltration stealthily executed on Australia.

In many ways, the United States can look to this expert and his study of Australia on how to diagnose, manage, and expose the negative results that foreign influence campaigns so often bring to the unwitting host.

Below are excerpts from my interview with Professor Clive Hamilton:

In 2016, mainly as a result of newspaper stories, I became alarmed at the apparent attempts by the CCP to influence politics in Australia. I decided to investigate the phenomenon and, if no one else better qualified were doing so, write a book about it. When it was published, I was surprised at the strong level of interest in Silent Invasion in the United States, mainly from within the federal government and among think tankers and analysts.

Hardie Grant Books, who came to the rescue in Australia, suggested the new book, Hidden Hand. So, we had an Australian publisher from the outset. We did not have much trouble finding a northern hemisphere publisher, with Oneworld quickly picking it up. Then deals were done for German and Dutch publications. Other translations are expected to follow. There is much greater awareness now of the problem, but publishers around the world are very wary of the CCP.

If there were a military conflict with China, one big unknown is how much China could mobilize its friendly forces within the United States and its allies. I have been attacked very strongly for raising that question in Silent Invasion, but military planners would be foolish to discount that kind of fifth column activity.

4.To the extent possible, what is similar or different about what you've seen in Australia and what you've observed in the US?

It’s a complex question with no simple answer. In Australia, we don’t think about regime change. We have much greater economic dependence, which makes us vulnerable to blackmail. One important similarity is that in both countries, when Beijing has run into headwinds at a federal level, it has concentrated its influence efforts at the state and local government levels. And with great success, as we show in Hidden Hand. The CCP uses a phrase for this strategy, which translates as “use the countryside to surround the cities.” The United States does not have the very large diaspora that Australia does, but it does have much more sophisticated technology that Beijing targets for theft. As it does with all smaller nations, Beijing believes it can push Australia around. The most important action for any country is to signal clearly it will not be bullied, otherwise you end up like Canada where the elites have for the most part capitulated. Sweden is a good case of a nation that has refused to be intimidated into acquiescence.

The Dastyari affair was very important in raising public awareness and prompting new legislation. The stories about his close relationship with a Chinese billionaire who has tight links with the CCP appalled Australians and made many aware that we have a big problem. It was telling that Australia’s former foreign minister Bob Carr was effectively in the pay of the same billionaire when he headed a think tank the billionaire set up. Carr became a loyal Beijing apologist.

I think phrases like “Chinese funding/support” are ambiguous and open to misinterpretation.

The most important measure is the law criminalising foreign interference. Foreign interference—that is, covert attempts on behalf of a foreign power to influence the government or interfere in the exercise of democratic rights--falls outside traditional definitions of espionage, yet it is the basic modus operandi of the CCP. The new law outlaws many “united front” activities carried out by the CCP in Australia. We have yet to see the first prosecutions.

Getting Huawei into the 5G networks of western nations, especially Five Eyes, is extremely important to Beijing’s strategic plans. It’s been preparing the ground for more than a decade, and Beijing has put enormous effort into winning the battle. More than anything else, the success of Huawei in penetrating the 5G networks will determine the future of the Five Eyes Alliance. If Beijing succeeds it will be recorded in the history books as a decisive victory for Beijing in its political warfare against the West—that is, if we are allowed to write the history books.

His legacy is viewed as mixed, and not too successful. Only the elites were impressed with his Chinese language skills. Keating and Howard did much more to build the relationship. Remember Rudd was reported at a climate change conference raging about “those Chinese rat-fuckers.” Today his views on China are all over the place, and seem to be tailored primarily to advancing his own interests.

I have no doubt that Beijing is doing everything it can to penetrate Pine Gap, including recruiting Chinese-Australians who can be persuaded or pressured to put China’s interests before Australia’s.

The coronavirus crisis is rapidly shifting global attitudes, mostly against China, although Beijing is having significant propaganda victories in some parts of the world. But the strategic landscape is shifting in ways beneficial to Beijing, not least because the governance faults of the United States have been exposed so badly, and the USA is on the ropes.