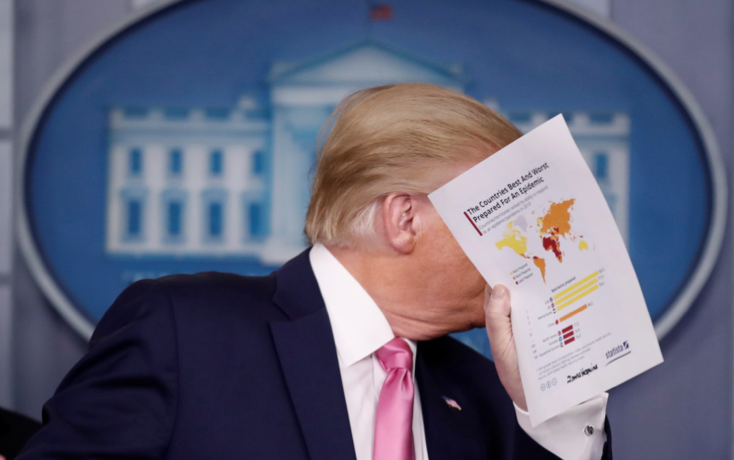 D.C. DISPATCH-Many Americans have been spending the quarantine glued to Bing’s Covid-19 tracker to monitor global and local progress against the invisible enemy and listening to our President’s endlessly meandering and misinformed briefings.

However, the release of Department of Health and Human Services (HHS) Principal Deputy Inspector General Christi A. Grimm’s HHS Inspector General’s report is a startlingly harsh IG document .and one that Trump, if the President had discovered before it was published, would have buried it six feet underground. Instead, he has worked furiously to attack her and her findings, resorting to “fake news” and “Obama era holdovers spreading lies.”

The report offers a “pulse” or a snapshot of how our hospitals have responded to the virus and to what extent their needs have been seriously unmet. It is not a political dossier or hatchet job (as Trump would assert) and shouldn’t be treated as one. Though Inspector Generals are slowly becoming an endangered species in the United States, the report should be evaluated on how cogently it achieved its objective: to collect and disseminate information across America’s hospital system from March 23-27 and to what extent our hospitals were prepared to meet the challenges of a nationwide pandemic.

The 41-page report’s data were collected via “pulse surveys” or interviews with administrators from over 323 hospitals and pathogen centers covering 46 states, Washington D.C., and the Commonwealth of Puerto Rico. So while 85% of administrators responded, it is unfortunate that 5 percent of those contacted failed to participate and the remainder did not respond. This could hamper the study’s ability to compile regional observations and patterns. Even though the survey could have benefited from higher participation rates, the feedback from America’s hospitals is clear: the hospitals and their staffs are under incredible strain from every angle.

Hospital feedback mirrored the countless interviews and social meeting postings by hospital workers -- that there are still not enough masks and personal protective equipment (PPE), ventilators, and trained personnel to safely and effectively perform their duties and care for patients.

Respondents assigned liability for this shortage to both state and federal authorities but found price spikes and lack of readily available supplies an issue that they could not handle on their own. Perhaps the shortage of staffing that many hospitals reported is correlated to the PPE shortage, but nonetheless it is clear the respondents feel the federal government’s response to COVID is weak and inadequate. There is increased demand across the emergency rooms and ICU units in hospitals across the United States. The report concludes we have failed to anticipate the needs of the pandemic and to adapt to the surge in demand from sickened patients; this failure can be attributed to shortages across personnel, equipment, hospital beds.

To compound the shortages highlighted in the report, many hospitals still bemoan the shortages of or lack of testing and find the wait times for results frustrating and harmful to making accurate and timely diagnoses of patients. When a patient experiences a delay in testing, there are multiple levels of consequences: staff not knowing whether they were exposed, sending patients home untested even though they may be showing symptoms of Covid-19, but still not sick enough to be admitted, delays in the process of admittance and treatment only when patients are seriously ill, and where death rather than treatment may be the outcome. It is clear that a 5-7 day wait for test results was not the exception, but the norm in many hospitals in the month of March, and that this phenomenon compromised patient care.

If the frontline challenges weren’t enough to test the foundations of our healthcare system, there is the added problem of real financial strains being experienced by hospitals that can no longer rely on their typical profit centers -- elective procedures. It was unsurprising to learn that hospitals do not generate most of their revenue from the ICU and chronically ill patients, such as those suffering from Covid-19. Given the length of hospitalization time, supplies, and personnel required for treatment of Covid patients, one could infer that hospitals would experience a surge in revenue. However, most hospitals reported falling earnings. With elective procedures accounting for over 80% of revenue in some hospitals, the revenue shortfall was widely reported as being an aggravating factor in a hospital’s ability to remain solvent during this crisis.

In my view, the only way to combat the shortcomings identified in this report is to create a just-in-time national registry to monitor supply and demand constraints of all hospitals across this nation. The Department of Health and Human Services is the agency that should be managing any shortfalls and ensuring that supplies are delivered in a timely way and at reasonable prices.

Governors should not have to compete against each other and FEMA to obtain needed medical supplies. Even though Trump has been reluctant to assume this responsibility, it rests solely with him and until he implements a cohesive national procurement system, hospitals will continue to experience price distortions and shortages. Hospitals in different states will experience the peak of their outbreaks at different times. We are dealing with 50 different curves whose stated responses, access to equipment, resources, personnel will be different, absent a unified organized effort to manage this very fragmented process.

The key to recovering from this crisis and flattening 50 different state curves relies on specific shortage data and identifying its patterns and testing on a massive scale. Efforts to focus on recovered patients and asymptomatic individuals (who may be between 25 to 50 percent of the population) also need to be accurately documented with antibody testing. As long as our President lays individual blame on the states and governors, instead of focusing on a federal solution and fails to fully understand the significance of accurate data, instead of searching for miracle cures, we will continue to be ill prepared to predict, successfully treat, and discharge cases of the invisible enemy.

(Sara Corcoran is publisher of the National Courts Monitor and writes for CityWatch, Daily Koz, and other news outlets.) Photo: Business Insider, Reuters. Prepped for CityWatch by Linda Abrams.