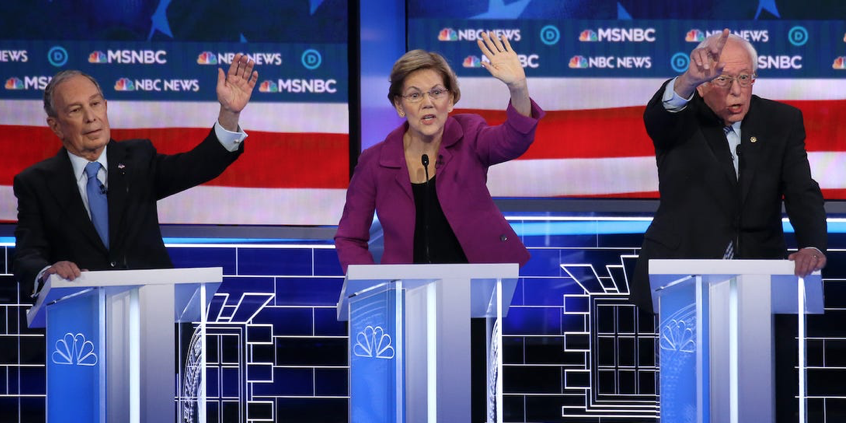 DC DISPATCH--Last night the seven Democratic candidates for President took to the stage in Charleston, SC for a rematch following the brawl and sprawl of the Nevada debate.

Unfortunately, the South Carolina contest was even more of an ungoverned free-for-all, and nixed the prospect of any momentum going forward. We were treated to a slice of the unruly Nevada debate on steroids and the public was hardly reassured by the display.

Senator Elizabeth Warren came out swinging against Michael Bloomberg. Although Bloomberg isn't on the ballot, her campaign must be looking for Super Tuesday dividends or the promise of a Vice Presidential reward if Bernie Sanders wins the nomination. While she may have come to the debate believing it was the best vehicle to raise money, she was neurotically fixated on Michael Bloomberg, probably to her detriment. She parroted claims that a former litigant stated in a lawsuit from decades ago. For a lawyer to make this claim based on a 23-year old complaint was embarrassing and she should be ashamed of herself. Elizabeth Warren with her mediocre showing should bow out and go back to the Senate where she has served as a successful and competent member or wait until she is called upon to work alongside the Bern.

Mayor Pete was a delight to watch on the debate stage. He consistently performs well, and he has a viable plan to acquire the number of delegates he needs to stay in the race. He reminded us that America isn't interested in revolution. More importantly, however, were his dire warnings of what a Sanders’ nomination would do to candidates down ballot who risk losing their seats if he became the Democrats’ presidential candidate.  These warnings need to be taken seriously and should undercut Bernie’s progress going forward. Buttigieg’s campaign goal is to keep the delegate spread count between him and Sanders below 350 until after Super Tuesday, hoping that he can make up ground in the following weeks and  go into a brokered convention. His campaign believes that this tactic will allow Buttigieg to do well on March 10th when Idaho, Michigan, Missouri, North Dakota, and Washington hold their primaries and on March 17th where Arizona, Ohio, Illinois and Florida go to the polls. Buttigieg has no intention of leaving the field after South Carolina or Super Tuesday and is likely to have sufficient funds and delegates to proceed.

Bloomberg’s performance was an improvement over his disastrous showing in Nevada. However, he was unable to swat the pesky “tsetse” fly, Warren, who continued to harass him. She acted like a woman who had just been scorned. This debate, Bloomberg was less dismissive of allegations of mistreatment by women and did a better job of countering Warren’s fire over nondisclosure agreements and allegations regarding negative comments made to or about women. Of course, Bloomberg has an advantage with his massive media apparatus and his ability to quickly generate media responses to issues that came up in the debate--he already has an attack ad against Trump’s rosy assessment of the coronavirus. His finest moments were when he discussed his commendable record on gun control and when he succinctly pointed out how unprepared the Trump administration is to deal with the possibility of handling a pandemic. This earned an honorable mention from Sanders who had been sparring with the former Mayor of NYC.  Because of the close relationships Bloomberg has developed with mayors across the country, he is in a unique position to execute a crisis plan should one be needed. Bloomberg made a plea to resurrect science as a means of identifying and dealing with national crises and that move was enthusiastically received. I was a bit surprised when he stated he was the only candidate to appeal to moderate Republican voters. What he meant to say was independents and liberal Republicans.

With the fate of his candidacy at stake, Joe Biden had a resurgence of kinetic energy. He stated that he would nominate the first African American woman (Anita Hill?) to the Supreme Court and vowed to continue his involvement in the protection of violence against women. He had the night that he needed, despite a few odd statements (bringing DARPA-like policies to health care) and a few endearing ones--good, old Uncle Joe was his old self. He was rewarded by a touching announcement of support from SC Congressman Jim Clyburn the following day, which should lock up his lead in South Carolina.

Sanders was the man to critique. His recent comments about the virtues of Fidel Castro were astonishing. Sanders must have forgotten the 14,000 Cuban lives that were lost during his regime and had selective memory when it came to the Bay of Pigs. Often, Sanders is credited with taking the high moral ground--wanting to ensure health care and free college for all Americans may be noble  aspirations--however, he doesn’t apply to the same standards to third world dictators. Teaching children to read is not a sufficient attribute to overcome harsh, dictatorial policies. Pablo Escobar built schools and sports fields for the less fortunate in Colombia. So did Hugo Chavez in Venezuela. However, they also killed, terrorized, jailed a lot of people and declared the United States an enemy of their respective countries. Sanders’ “Socialist” label and his honeymoon is Moscow are just the beginning of the oppo research that is going to come cascading down over his head in the next few weeks.

Tom Steyer seemed out of place throughout the debate and should probably seek another area on which to focus his attention. Amy Klobuchar seemed maternal, trying to calmly corral a group of unruly kindergarteners coming off a sugar high, but it’s time to focus on selecting a viable candidate and the field needs to narrow.

The moderators at CBS won the dubious distinction of conducting the most raucous debate to date. Toward the end, Gayle King partially saved her reputation by asking “First, I’d like you each to tell us the biggest misconception about you, that’s number one," she said. "Number two, the South Carolina motto is this — while I breathe, I hope. So, outside of politics, and no more than 45 seconds or so, what is your personal motto, your personal belief, your favorite quote that represents you?” The candidates answered the second part of the question with standard political caution, but the first part on misconceptions was enlightening. For Amy it was that she is boring, Elizabeth eats all day, Bernie’s ideas aren't radical, Joe Biden has too much hair, and Mayor Bloomberg thinks he is six feet tall. Finally, a break from the infighting and a moment of levity drifted across the debate stage.

A political debate is meant to be a forum where candidates respond to questions and refute claims about their candidacies in a gracious way. It is designed to have more structure.  A disorganized spectacle like we saw in South Carolina, where candidates are constantly shouting and interrupting their opponents, relying on contempt and animus  isn’t helpful to either the candidates or the audience.

Democratic debates risk becoming a forum where we make our candidates more unlikeable than electable. The debates are becoming platforms for moderators to ask zinger questions that encourage political brawls.  Until moderators cut off the microphones of unruly participants, this debate format will do more to weaken the Democrats’ prospects rather than distinguishing their policies from those of Donald Trump.