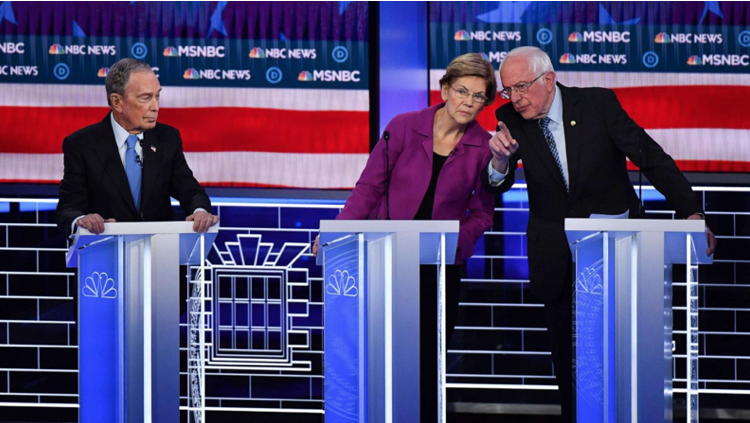 DC DISPATCH-As the top six Democratic presidential candidates took the stage at the Paris Hotel in Las Vegas, Nevada the party had two main objectives: to confirm the front runner and to eliminate the candidates who lack the electoral support and resources to produce a strong showing on Super Tuesday where 1,357 delegates are up for grabs.

While Bernie Sanders may have confirmed his front runner status,  the debate failed on the second key requirement—thereby increasing the probability of a brokered convention down the road if no one candidate reaches the 1,991 delegate count required  to win the nomination on the first round. Sanders was the only candidate last night to express the view that even if he didn’t reach that number, a majority delegate count should prevail. (He expressed the exact opposite view in 2016 when he thought Hillary Clinton wouldn’t make the cut).

Meanwhile, while in town for a rally in Arizona, Trump must have watched the debate with glee in his typically magnanimous fashion, he went on to describe Michael Bloomberg’s debate performance as the “worst in history.”

The Democrats appeared more fragmented than ever. Chaos reigned and they seemed like an unruly bunch of whining children, frantically waving their hands in the air waiting to be called on by an out-of-control group of debate moderators. The evening would have benefited from a little more structure and discipline, and was most notable for the subjects that were not covered--gun control, impeachment, Donald Trump’s abuse of the rule of law, national security, and the national debt, to name a few.

Bloomberg was the target of scrutiny over allegations of sexual misconduct/harassment that his company, Bloomberg LP, has faced over the years, with Elizabeth Warren demanding that Bloomberg release any women from nondisclosure agreements they may have signed with his company. Unfortunately, his response fell short and his   counter-claim that “None of them accuse me of anything other than maybe they didn’t like a joke I told” did little to quash the controversy. Had Bloomberg been counseled by an attorney on how to respond, he might have fared better. He could, for instance, responded with something along the lines of: “Given the confidential nature of the agreement, I am not at liberty to discuss it. I am not comfortable unilaterally breaching the terms of an agreement, where the plaintiff's identity is protected. While most claims of sexual harassment are legitimate, there are many claims that are not or have other mitigating factors such as subpar work performance.” As this issue had already appeared in the press, Bloomberg clearly should have been better prepared for these questions by either his legal or media teams.  While he tried to tout the very significant benefits that his company has given to women, Warren’s retort that his benefits were selective was grossly unfair but he never had the chance to respond.

Perhaps Bloomberg was shell-shocked by the intensity of the attacks, but he is known for his tough skin and he had better up his game. It has been almost eleven years (2009) since he has been to a debate and it shows. If Bloomberg is going to be a serious contender for the Democratic nomination, he must do better in the debate scheduled to take place in South Carolina next week.

Joe Biden seemed lost and kept making point 1 and point 2, as if this was a crutch to keep him on message. Amy Klobuchar, who has experienced a boost in her national polling numbers, fared better but was not immune from the aggressive attacks of her stagemates. Senator Klobuchar made a convincing argument that she has the ability to appeal to multiple constituencies, including conservatives. Her arguments over the weaknesses in Sanders’ Medicare For All platform were well argued and cited.

However, she lost a bit of her sparkle when she tangled with Pete Buttigieg and was pressed by a Telemundo reporter over her inability to recall the name of current Mexican President Lopez Obrador. (A more appropriate question would have been to ask about how Immigration is affecting the Hispanic community and the candidate’s plan to reform it.)

While Sanders and Warren may have been declared the “winners” of the debate by most pundits, it remains to be seen if the people of Nevada feel the same way. Yes, Warren’s prosecutorial style may have earned her comparisons to a line prosecutor but she seemed frantic and overly aggressive. Bernie also looked disheveled and spent most of his time screaming into the microphone, refusing to divulge complete health records, to discuss how he would pay for his expansive programs, and ignoring criticisms of the conduct of his Bernie Bros.

The debate from the Sandstone State will amplify concerns moderates and independents have about the prospects of a Sanders nomination, and I suspect this concern is mirrored in the rank and file of the Democratic National Convention delegates. We have witnessed the Democrats’ moderate candidates, whose polling shows them being able to beat Trump in the swing states, weakened and the prospect of a Sanders/Warren ticket increased.

We know that Bloomberg has created a wave of political momentum that has allowed him double digit support in national polls and leading in some Super Tuesday states. His closing statement said it all, “This is a management job, and Donald Trump is not a manager. This is a job where you have to build teams. He doesn’t have a team. We cannot run the railroad like that.”

But after last night’s performance, to emerge a Super Tuesday winner Bloomberg needs to do a bunch of interviews and televised video townhalls where he can showcase his strengths on gun control, climate change,  and demonstrated ability to build a business and attract investment (he is the only one of the candidates who has both built a business and held political office). Bloomberg’s fall is recoverable, but to do so he must spend time crafting better responses to accusations and criticism related to hostile work environment, stop & frisk, and health care.

Equally important, he needs to spend more time touting his very real attributes, the most important of which is the ability to confront and beat Donald Trump. If the Democrats are to unseat this President, the candidates must learn to debate without yelling and losing their cool, or Trump will be able to rightfully claim that he was the prime beneficiary of last night’s debacle.