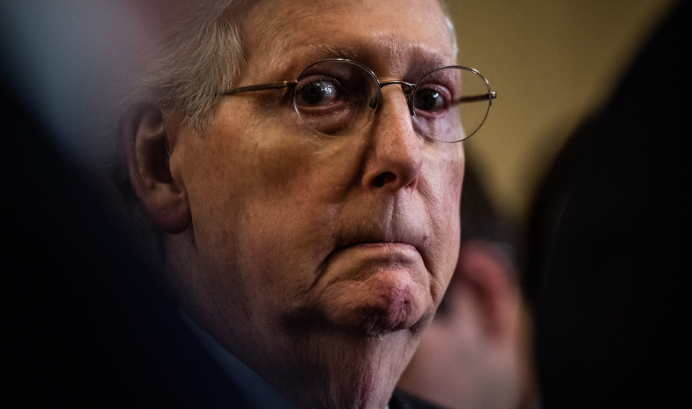 DC DISPATCH--On January 31, 2020, the United States Senate handed Donald J Trump a crown and scepter. Republicans voted 51 to 49 to table a motion and denied the House Managers the chance to present witnesses and documents, thus rendering the trial a meaningless sham.

The disappointment of the House Managers was palpable. Adam Schiff, accompanied by Jason Crow, Val Demings, and Hakeem Jeffries put up an admirable fight in the tribunal, but they faced insurmountable opposition from a Republican Majority leader who openly expressed his intention to work hand in glove with the White House to  stifle any opposition.

The record is now closed and there will be four hours of closing argument with a final vote on acquittal on Wednesday, February 5 at 4.00 pm. Senators will have time to take to the Senate floor to explain their acts of extraordinary cowardice and try to cloak them in some lofty rationale. However, a public that overwhelmingly expressed a desire to learn the truth is not likely to be persuaded by any arguments Senators make. Their anger and disappointment will likely be felt well into election season.

Lamar Alexander announced his “no” vote early, claiming that House Managers had met their burden of proof in showing that President Trump used public funds to benefit his personal political needs. He deemed Trump’s conduct “inappropriate” but not impeachable. He further found the article against obstruction of Congress “meritless.” Based on this analysis, the retiring Senator argued that no new witnesses or documents were needed to prove the case. Marco Rubio parroted parts of this rationale, but added some lofty verbiage about the harm that impeachment could cause the nation if it were not a bipartisan result and reasoned that a “yes” vote on witnesses would not be “in the best interests” of the country. He argued that the decision on Trump’s future should be left to the electorate in November, 2020. I suspect, we will hear a wide range of similarly self-aggrandizing justifications on the Senate floor in the next few days, but the bottom line will be that Senators have just handed the President a series of nooses that he will cheerfully tighten around this august body’s collective neck.

Trump now has an unrestricted license to cheat, lie, and steal without oversight. The public can no longer be assured that its vote will not be manipulated or suppressed in ways we have never contemplated before.  Giving cover to Senators, Alan Dershowitz issued a stunning proclamation on the Senate floor, announced once before by President Nixon after he had left office,  “When the President does it, that means it is not illegal.”

Astoundingly, Dershowitz posited that if the President, in his efforts to be re-elected, asks a foreign power for help in conducting an investigation of a domestic adversary-and the fact of his re-election is considered to be in the best interest of the American people, then the act is perfectly acceptable and does not constitute an impeachable offense. In essence, if a President has an impure motive as well as an acceptable public interest, then these motives cannot be decoupled and the public interest motive prevails.  Dershowitz’s argument, while extremely pleasing to Trump, is hardly a mainstream interpretation of Article II powers, and he has faced immediate scrutiny from both the right and left. He was noticeably absent from the President's legal team on Thursday. However, his misguided and monarchical assertions will forever tarnish his place in history. This terrible precedent, set by the counsel for convicted pedophile Jeffrey Epstein, will embolden the other law enforcement levers that Trump now controls as he seeks revenge on those who dared oppose him.

Trump’s legal cohorts have already moved to muzzle former National Security Advisor John Bolton claiming that his book contains “classified” data. They also failed to submit judicially mandated relevant OMB documents that could directly implicate Trump and Pence in the Ukraine scheme until after the trial record had closed. Mitt Romney has been disinvited from CPAC. Maria Yovanovitch has resigned from the Foreign Service and Bill Taylor has also stepped down and departed. Jennifer Williams, an aide to the Vice President who testified before the House, has been reassigned. We've already become accustomed to being manipulated by Office of Legal Counsel opinions that are being hastily drafted to justify DOJ actions. We also saw Attorney General Barr try to  suppress the whistleblower’s complaint claiming that Trump’s conduct in asking Ukrainian President Zelensky for a favor would not qualify as a Federal Election Commission (FEC ) regulations violation because DOJ could not establish that the request was a “thing of value” under the statute. Amazingly, DOJ did not explore any other possible criminal acts, such as possible bribery, extortion or violations of the impoundment act as they tried to bury evidence of Trump’s wrongdoing.

Seeing prosecutors close certain investigations and start new ones suggests that Trump is beginning to focus his attention on the control of DOJ even further. He is obviously keen to have U.S. Attorney John Durham come to some damning conclusions in his favor before the election and he has long had his sights on former CIA Director John Brennan, former FBI Director James Comey and former FBI Deputy Director Andrew McCabe. DOJ’s recent about face on Michael Flynn, halting its bid for jail time confirms the President's corrupt influence taking over the Justice Department. Is the Southern District of New York going to drop the "investigation" into  Rudy Giuliani? Is Roger Stone going to get a light sentence or no jail time at all? Is Paul Manafort going to get released from jail early because of some technicality found as part of Ukraine’s investigation? Let’s not forget the damage Trump has inflicted on Joe Biden. The court system is seriously strained with the volume of litigation that Trump’s presidency produced. Yet, all these cases bear close watching. And this is even before we can expect some further exercises of Trump’s pardon power in the coming months.

The prospects for further abuses of power appear limitless. Will it soon be in Trump's best interests to invite foreign oligarchs “to do us a favor, though” and carry out  assassinations or abductions of US citizens at home or overseas? Is it too extreme to envision a conversation where Trump has a breakaway session at a G20 meeting and asks Putin to help him out with a former NSA advisor who is causing him trouble and who would benefit from a spot of afternoon tea with some a dash of radioactive Polonium-210 mixed in? Dershowitz would probably hotly defend his Constitutional claims and deny that they should ever be applied in the extreme. But he, like all of us, has probably underestimated “the perfidy” (Schumer’s aptly used word) of our President.

While Democrats have been dealt some bruising defeats--the confirmation of Brett Kavanaugh, the minimization of the Mueller Report and the impeachment trial--they must be steadfast in their opposition against an emboldened President. Unfortunately, I expect partisanship to reach a new high with lingering resentment that will preclude a spirit of cooperation on prescription drugs, healthcare, immigration and more tax cuts. The Senate is now a body complicit in covering up the President’s criminal conduct.  As Republicans turn right angle hard right and Democrats bank hard left, there remains only one person in the middle who can capture supporters from the moderate  centers of both parties,: Michael Bloomberg. Mike "I can get it done” Bloomberg" is the only candidate who can wrestle the crown and scepter from an American Louis XIV.