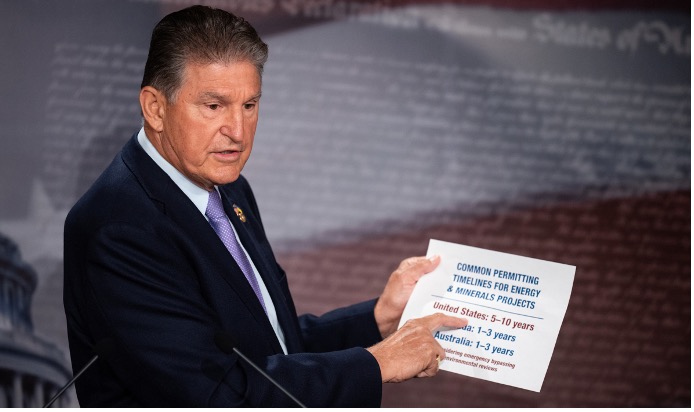 ACCORDING TO LIZ - “The problem is not how many dollars remain underground if fracking is banned, but how many lives are lost above ground, if it isn’t.”

This was the response of Gustavo Petro, Colombia’s new president, in response to a claim banning fracking will mean fewer opportunities for young Columbians, and that there will be fewer public works.

Petro is right. The real solution in the face of massive climate change that will only get worse is not to drill and not to use fossil fuels.

This past summer, Joe Manchin issued an ultimatum to the Democratic leadership – take his industry-scripted deal to enrich dirty energy companies that he and men like him own OR he’ll shut down the government on September 30th.

Yesterday, September 21st, he released his Energy Independence and Security Act of 2022, the comprehensive permitting reform text to be included in the Continuing Resolution which continues funding for US government operations.

The day before, Schumer confirmed he planned to add this to the funding resolution “and get this done.”

Not having read all of the 91 pages, what is clear is that this is even worse than the draft that circulated last month bearing the watermark of the American Petroleum Institute.

It eviscerates the National Environmental Policy Act and many other protections for people, effectively defangs any actions by the EPA, and makes a huge birthday-plus-Christmas present for Manchin’s buddies in the fossil fuel industry.

Press coverage focused on the need to reform procedures and ignores the graft and giveaways larded underneath.

This may play well to anyone who has run up against bureaucracy in trying to advance any type of project but avoids the fact that this is a complete giveaway to the fossil fuel industry and a huge loss for addressing climate change and protecting the land, water and air of the United States as well as the health and quality of life for all Americans.

Ultimatum, coercion, bullying, bribery, intimidation, extortion… When will the greediest in our society stop flexing their power to ensure their personal profit at the risk of the lives and health of the 99%?

The existential question of the month is whether our Democrats in Congress will act on behalf of their constituents or bow to Manchin’s bullying. Or they will have to answer at the ballot why our lives, our health, and our environment should take the back seat to over $13 million in fossil fuel company largesse spread lavishly among Democratic candidates and committees.

Instead, all responsible politicians, Democrats and Republicans, had better take West Virginia Senator’s terrorist tactics right back to him. Or, not only will the people of the United States be betrayed by this selfish dictator, but the planet itself will suffer deep and irreversible consequences.

Manchin has already demonstrated on multiple occasions that promises aren’t binding on him: House progressives passed the fossil-friendly Bipartisan Infrastructure bill on his word that he would support what was then called Build Back Better. But Manchin reneged, gutting much of what was best in that bill.

In the case of the Inflation Reduction Act, Manchin coerced Schumer into agreeing to push his oil industry-backed compromise by pitting the concession against American lives – the many thousands who would breathe fewer toxins and die, the millions who will live longer, healthier and more productive lives from the Act bending the arc of the climate crisis in humanity’s favor.

And perhaps a bribe to Schumer supporters by adding expansion of utility infrastructure to sweeten the deal.

Manchin, who on top of his own deep personal investment in fossil fuels, has taken more money from the fossil fuel industry than any other Washington politician. And Schumer is number one for utilities…

Manchin’s implacable position has been: “Gimme my pipeline or people will perish.”

Instead of supporting his party, Manchin has railed against what he calls the hard left, those who oppose unlimited fossil fuel development and support programs for the least privileged.

What hard left? Those who oppose his deal are most Americans who want a future for their children. Who don’t like greedy pigs like Manchin holding the Senate hostage.

The Americans who live in West Virginia and are fighting for their lives against their own Senator, a senator who is actively undermining laws that protect homes and families from the fossil fuel industry.

Americans who have so far successfully stopped the Mountain Valley Pipeline, the key element of the fossil fuel agenda Manchin wants to fast-track under his bill by removing jurisdiction from the courts altogether.

Over 1,200 groups and huge numbers of the public and their elected representatives oppose the pipeline which they estimate will have lifetime emissions of about 25 coal-fired power plants.

The Senator’s side deal would move jurisdiction to DC courts that he hopes can be persuaded to turn a blind eye to the landslides, deforestation and water contamination already caused by construction, the fact that the pipeline crosses a fault zone where spills will endanger fish, animals and people. And to earlier-laid sections of the pipeline that are already corroding.

In August NBC News placed Manchin of West Virginia the state that is home to black lung disease, the Dupont PFAS scandal and the heart of the opioid epidemic – dead last in the political popularity poll. Behind the Supreme Court and the Republican Party, behind Mike Pence and Donald Trump.

The bill explicitly states that in order to allow a solar or wind project on federal lands, the federal government must have an oil-and-gas lease sale beforehand – say what?

This could require the Federal government to hold an oil and gas lease sale in Alaska in order to set up a wind farm in Wyoming.

Environmental leaders in Alaska worry the bill will, in order to accomplish national goals, expand mining and drilling which may not be in their state’s best interest.

Progressive Democrats who are fighting tooth and nail to pry Manchin’s bill away from the stopgap funding bill may be joined by a number of Republicans who oppose the regionalism of Manchin’s demands and are concerned that it would add just another layer of bureaucracy.

Whatever your political persuasion, please reach out and make it clear to your Senators and member of Congress that this permitting bill must be separated from the Continuing Resolution so opposing it does not mean voting to shut down the government. Allow it to be voted on based on its own merits.

And if it can’t be separated, the next step is to oppose government funding if Manchin’s bill is attached. This is an issue of extortion and deep-pocked companies condemning ordinary Americans to fifty more years of pollution, land desecration, and global warming.

It more than merits drastic action.

Manchin demands the government invest in fossil fuel development… but his handouts to corporations do not guarantee anything, and where’s the accountability?

Should Big Oil and its advocates have ANY input into a clean energy future?

The only sure thing is that our land will continue to be raped, our water poisoned, and our air befouled with no consequences to be borne by the rapists and all costs to be shouldered by the taxpaying public.

And, of course, any gain would go to the oil and gas companies with all the entrenched tax incentives to make sure that they profit even more by taking tax money away from the people that it is supposed to benefit.