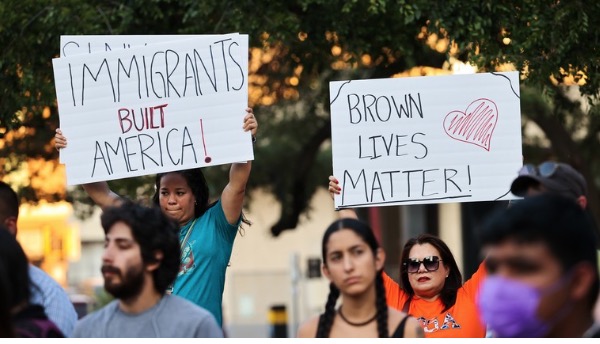 IMMIGRATION REFORM - The American public overwhelmingly supports legal immigration, with deep divisions on whether this path is “easy”.

Both parties criticize the Biden administration’s policies on the southern border, while sensationalized news coverage of a border crisis often misrepresents undocumented immigration. Often left out of these discussions is legal immigration, which constitutes approximately 77% of all immigrants.

Clear majorities of Americans historically viewed immigration as a net positive, yet persistent majorities also view undocumented immigrants negatively. Pew Research surveys in 2018 found support for increasing legal immigration tripling since 2001 at 32%, most of that increase attributed to Democrats, with an all-time high of 75% believing immigration as beneficial for the US. Meanwhile, a 2022 Gallup poll shows 40% of Americans remain concerned about the presence of undocumented immigrants.

Critics of undocumented immigration often focus on arriving the “right” way. While this may conjure images of waiting one’s turn in line, or assumptions about how one’s ancestors arrived to the US, this ignores the complex path today for legal immigration.

In contrast, the US had little formal restrictions on immigration until 1875 Asian Exclusion Act and 1882 Chinese Exclusion Act and only enacted quotas in 1921, quotas that did not apply to countries in the Western Hemisphere. Sticking with the line metaphor, the waiting period differs by country of origin, as US law puts per-country ceilings of no more than seven percent of immigrations in a fiscal year. Thus, immigration from high-demand countries, such as Mexico, typically have much longer waits than lower-demand countries. In addition, high demand countries have seen a rise in wait times to receive a green card. For Mexico, it took approximately 5.3 years to apply for a green card in 1991, however that rose to approximately 8.4 years in 2018. Assumptions about the relative ease of legal immigration risks exacerbating calls for harsher treatment of undocumented immigrants and distracts from the type of immigration reform that could reduce undocumented immigration in the first place.

To address perceptions of legal immigration, we conducted a national web survey in the US June 29-July 11 via Qualtrics with quota sampling for age, gender, and geographic region. We asked 1,728 Americans first to evaluate the statement “I support legal immigration” on a five-point Likert scale (strongly disagree to strongly agree). Over two-thirds of respondents agreed with the statement (67.3%), with Democrats more supportive than Republicans (75.11% vs. 62.73% respectively). In contrast, 12.91% of respondents overall did not support legal immigration, with Republican rates (18.45%) over twice that of Democrats (8.48%). Besides partisan identification, we find age, income, and education all positively correspond with support for legal immigration, while Whites and Asians were more likely to state their support for legal immigration compared to Blacks and Hispanics.

Next, we asked, “in your opinion, is it easy for migrants to immigrate legally to the US?” A majority stated it was not easy (53.88%), with Republicans nearly twice as likely to think it was easy compared to Democrats (63.28% vs. 34.37%). This partisan divergence is similar to that seen in a 2021 survey focusing specifically on immigration from Mexico. Those supportive of legal immigration were also less likely to think legal immigration is easy, as were women and those with more education, while age positively corresponded with thinking legal immigration was easy. When a similar question was asked of Mexican citizens in 2021, nearly 80% identified legal immigration to the United States as difficult, suggesting the disconnect between American perceptions and the reality of the immigration process. 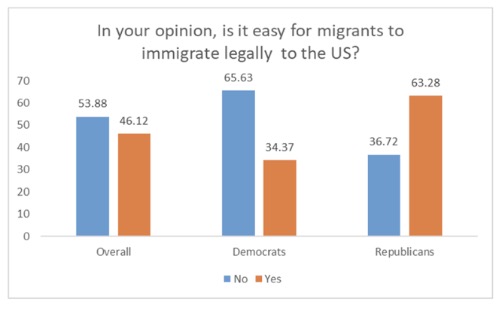 Meaningful immigration reform is unlikely as long as debates myopically focus on undocumented immigration, which arguably generates a visceral and more electorally salient response, and not the convoluted path towards legal immigration. Such a focus risks promoting policies ill-equipped to address the underlying factors incentivizing immigration, documented or undocumented, and generating policies that actively discourage entering the perceived “right” way.

(Timothy S. Rich is a Professor of Political Science at Western Kentucky University and director of the International Public Opinion Lab (IPOL). This article was published in Common Dreams.)

(Madelynn Einhorn is a recent alumna from Western Kentucky University, majoring in Political Science and Economics.)

(Josie Coyle is an honors undergraduate researcher at Western Kentucky University, with majors in International Affairs and Chinese.)