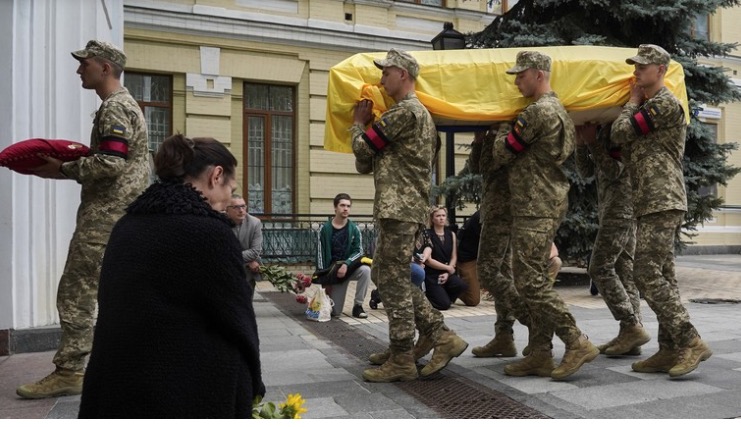 RUSSIA UKRAINE WAR - The war in Ukraine must end urgently. The longer it continues, the greater the ghastly consequences will be and more challenging the obstacles to peacemaking.

A narrow window for a diplomatic end to the war may be ahead as both sides are exhausted, making a pause conceivable. Although initially a ceasefire would freeze Ukraine’s current territorial losses, that would be preferable to the war continuing indefinitely. Subsequent peace negotiations would address the ceasefire’s unjust outcome.

While the Russian invasion of Ukraine is a flagrant violation of international law, it is nonetheless the consequence of a monumental failure of diplomacy. Russia’s decades old differences with Ukraine and the West, particularly about the expansion of NATO, should have been the subject of dialogue rather than scorn. Instead, the United States continued to encourage Ukraine’s NATO ambitions, including in November 2021. An urgent resumption of dialogue between the United States and Russia is essential for ending the war in Ukraine.

While the war is being fought between Russia and Ukraine, in Moscow it is seen as a war with the United States. Russia aims to deter Ukraine from joining NATO, to protect the “people’s republics of Donbas” — the Eastern provinces of Luhansk and Donetsk — and to consolidate a land bridge between Donbas and Crimea. Ukraine aims to preserve its territorial integrity and sovereignty, and “defeat Russia.” For both sides, the war is existential.

Already in its sixth month and not showing any sign of ending, the war has caused immense human suffering and destruction in Ukraine. The war has claimed more than 100,000 Ukrainian casualties and displaced more than 14 million. Ukraine’s reconstruction costs are estimated to total a staggering $1 trillion. On the Russian side, estimates put losses at 75,000 dead and injured. These are shocking numbers.

The combined impact of war, refugees, unprecedented sanctions on Russia, and diminishing Russian energy supplies are causing high inflation and fuel shortages in Europe. Moreover, the war has prevented the export of agricultural products from Russia and Ukraine to developing countries, causing food insecurity. Most ominously, the war has shattered a red line in international relations: nuclear “saber-rattling.”

Yet, an astounding number of Western policy hawks are urging more aggressive military assistance to Ukraine to take back territories currently under Russian occupation. They equate appeals for negotiation to appeasement. These pundits disregard the consequences of their advice and the facts on the ground.

In mid-June, a Ukrainian leader tweeted that the country needs thousands of heavy artillery, rocket launchers, tanks, and drones, confirming the scale of additional Western assistance needed to reverse Russian advances. But, even if Ukraine could prevail, Russia is likely to come back with another invasion next year.

Thus, whether the war escalates to gain back territories, or a stalemate ensues, Ukraine will require continued Western support in perpetuity. In Russia, the impact of sanctions will deepen, gradually draining its war capacity, also impacting the general population. If the war continues longer, the staggering human, material, and political costs will increase not only for the two warring sides, but also for Europe and the world beyond.

On March 29, Ukraine and Russia reached a landmark agreement on arguably the most contentious issue — Ukraine agreeing not to join NATO. Further, the future of the Ukrainian territories then under Russian military control or already annexed to Russia would have been the subject of extended multilateral negotiations. The proposed agreement was not concluded, and the parties are further apart now.

Indeed, opposition to negotiations is formidable in Ukraine — an opinion poll in May revealed that 82 percent of Ukrainians opposed any territorial concessions to reach a peace agreement. Understandably, the Ukrainian government will be hard pressed to agree to a peace deal that does not include restoring at least part of its territorial integrity. Additionally, Ukrainian concessions must be submitted to a popular referendum. The Russian side does not seem interested in an agreed settlement either.

For both sides, negotiations will require dialogue with a demonized enemy. This would not be an exception in peace making history. Recent negotiations between Russia and Ukraine regarding the exchange of prisoners of war and facilitation of grain exports are encouraging.

A game changer would be if the United States and the European Uunion consider tangible incentives such as accelerated E.U. membership for Ukraine and incremental sanctions easing for Russia conditioned by a ceasefire and good faith negotiations for a lasting peace agreement. Additionally, the agreement must reimagine future relations between the United States and Russia as well as between the E.U. and Russia. Thus, each side would have appealing incentives to stop the war and discourage the resumption of fighting. Wise diplomacy and statesmanship must ensure that neither side is humiliated in the process.

Such an initiative will require a Herculean diplomatic effort to get it off the ground. Current and former world leaders, particularly from the global South, with trusted access to the presidents of Russia and Ukraine could undertake the initial heavy lifting to persuade them that a negotiated end to the war is possible and preferable. The U.N. Secretary-General, using his considerable moral authority, could mobilize these peacemakers.

With the slow and costly military advances that both sides have managed to secure in the past months, they are likely approaching a point in the war when stopping it may be conceivable. That moment may come before winter starts in October. By then, Russia either would take over the entire Donbas region or, having taken most of the region, pursuing the remaining parts of Donbas would prove too prohibitive for its forces. Russia could then declare “mission accomplished” for its “special military operations.” The Ukrainian armed forces are using precision, multiple-launch weaponry that the United States provided in June, exacting a heavy price on the Russian side. Currently, Ukraine is aiming to take back Kherson in the south. They may succeed. Thus, a narrow window for peacemaking will likely open in October making an immediate ceasefire possible followed by peace negotiations.

Inevitably, the ceasefire will produce an unjust outcome initially. However, the future of Ukrainian territories under Russian control at the time of a ceasefire will be determined during extended multi-lateral negotiations, which would restore Ukraine’s territorial integrity to the extent possible, preserve its sovereignty, provide security against any future incursions, guarantee Ukraine’s non-NATO and non-nuclear status, create a multilateral infrastructure for reconstruction, and support the country’s accelerated accession to the E.U.

Washington has a vital role in this peacemaking effort. As the driving force behind the transatlantic coalition supporting Ukraine’s resistance and as the principal architect of sanctions imposed on Russia, the United States must assume responsibility for preparing the ground for eventual negotiations between the warring parties. In the first place, the United States must return urgently to dialogue with Russia. In this vein, designating Russia as a state sponsor of terrorism, as the U.S. Congress is threatening and Ukraine is urging, would be tantamount to burning all bridges with Russia for the foreseeable future and condemning Ukraine to interminable war.

(Hrair Balian is an independent practitioner of conflict resolution, currently focusing on Ukraine and Syria. From 2008 through 2021, he served as Director of The Carter Center’s Conflict Resolution Program. Since 1990, he has worked on conflicts in the Balkans, Eastern Europe, Caucasus, Central Asia, Middle East and Africa. This article was featured in Common Dreams.)