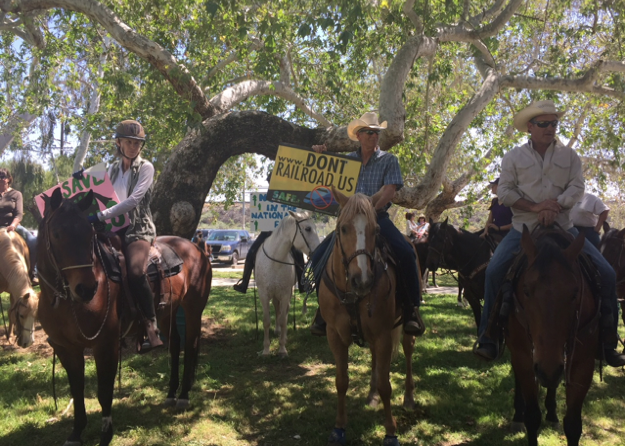 The two major themes were: first, the audacity and lack of respect shown by the high speed train Authority in scheduling its board meeting next week downtown on a work day, rejecting more than 200 written requests from our community (none of which were given the courtesy of a response), requesting the meeting be in a convenient, Valley location to foster greater community attendance and input.

Second, speakers hit repeatedly on the weaknesses and damages posed by the existing route proposals (E1, E2 and SR14), the lack of integrity of the environmental studies, and the lack of funding available to finish the project in Southern California. 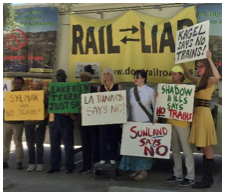 Even the previously rejected "Metrolink Alternative," being re-assessed as a possible solution, was criticized as doing nothing to remove the present route alternatives. One last theme was the importance of communicating with our elected officials, in particular Senators Hertzberg and Portantino, in upcoming weeks as the public comment period for the 2018 Business Plan concludes and the Legislature will vote on whether to approve the Plan and enable continued funding.

People in attendance felt strongly and chanted repeatedly that the Legislature should "elect to reject" the Business Plan. That chant and several others: "Let's Vote Again," "No More Trains," and "Bite the Bullet," resounded throughout the meeting! Our strong feeling is that the Business Plan is the sum of its parts and the Palmdale to Burbank project section is so flawed and infeasible that the entire Plan's credibility and worthiness is negated.

Finally, we noted for all in attendance that Mayor Garcetti, who is not working with or helping the SAFE Coalition or our communities, was in Iowa today meeting with union members and farmers related to his run for POTUS, and Councilmember Rodriguez, who has ignored hundreds of meeting and support requests from the SAFE Coalition and our communities on this issue since taking office last July, continued to renege on her campaign promises and again missed this important and large community meeting, much like she and her staff missed the Unity Meeting on February 22.

The entire meeting was videotaped and the edited product will be available publicly shortly and will be submitted as official public comment on the 2018 Business Plan. For anyone interested in attending Tuesday's high speed train board meeting, the meeting is at the Metropolitan Water District offices in downtown Los Angeles, starting at 10 a.m. Thanks to all the volunteers who made today's meeting successful and inspirational!

The SAFE Coalition … Get in touch: www.dontrailroad.us

(Dave DePinto is with the SAFE Coalition.)