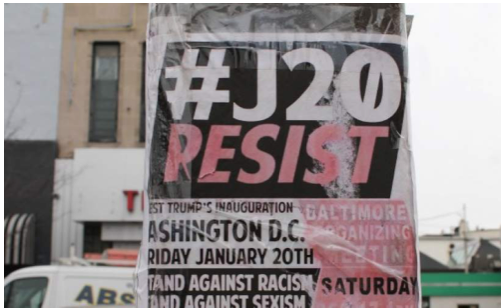 RESISTANCE WATCH--In what was described as a "huge victory" for those who took part in "the first act of resistance under this administration," a federal judge on Wednesday dropped felony riot charges against the six Americans who are currently on trial for protesting President Donald Trump's inauguration in January.

The defendants are still facing other charges related to property destruction, which critics have denounced as "outrageous."

The judge's decision came after character witnesses testified on Tuesday that the J20 protesters on trial were never anything but peaceful during anti-inauguration demonstrations—a point the government has already effectively conceded.

As the Washington Post reports, "Although there is no evidence the defendants on trial caused any of that damage directly, prosecutors argue that the entire group of protesters bears responsibility."

More than 160 additional defendants are still awaiting their time in court. If convicted, some could face decades in prison.

(Jake Johnson reports for Common Dreams … where this piece originated.)