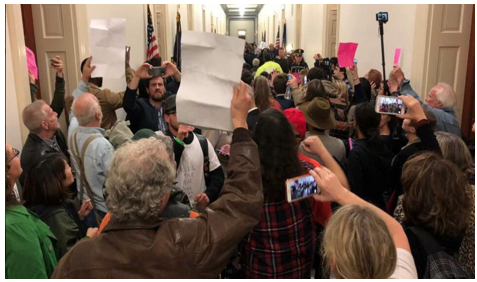 RESISTANCE WATCH--Opponents of the Republican tax plan moving through Congress showed they were not backing down on Tuesday as hundreds of protesters chanted "Kill the bill!" and "Tax the rich, not the sick!" as they assembled outside the offices of GOP lawmakers.

While numerous arrests were made in the crowded hallways, the demonstrators made it clear that the fight to defeat the bill is not over yet.

Demonstrators targeted Reps. Ryan Costello (R-Penn.), Barbara Comstock (R-Va.), and other Republicans who voted for the tax plan, visiting their offices and telling staffers how they would be impacted by the law. Both Costello and Comstock are up for re-election in 2018.

Capitol Police began arresting protesters at about 2:30pm outside Costello's office, with chants of "Kill the bill, Costello!" continuing as people were led away in handcuffs.

The Senate passed its bill in the middle of the night on Saturday, after finalizing the proposal just five hours earlier. Democrats protested that no hearings had been held about the potential impact of the bill, which a number of bipartisan groups found would raise taxes on middle-class families by 2027. A Quinnipiac University poll released on Tuesday found that 53 percent of Americans disapprove of the legislation, while just 29 percent support it.

The Senate and House must still reconcile their two versions of the bill in a conference committee which was formed on Monday. Nine Republicans and five Democrats from the House have been named to the panel, with the Senate expected to send members later this week. The committee will debate the two bills with the goal of sending one piece of legislation to President Donald Trump's desk by Christmas.

With continued pressure in the coming days and weeks, said opponents of the #GOPTaxscam on social media, there is still a chance of keeping the bill from becoming law.

(Julia Conley reports for Common Dreams … where this piece was first posted.)