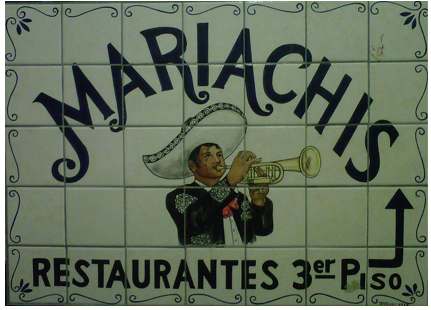 RESISTANCE WATCH--On a nippy November evening, 80 defiant Boyle Heights residents and allies trekked to the Westside to rally near multimillionaire Frank “BJ” Turner’s McMansion, miles from the historic corner where Turner is trying to drive out LA’s historic mariachi musicians and their families.

Having gotten little more than lip service from Los Angeles City elected leaders, the crowd went to the source, turning the heads of motorists, who slowed and hollered “keep up the fight,” honking in solidarity. The peaceful but vocal protesters looped around the block and spoke with Turner’s neighbors, most of whom had no idea their BJ was in the business of displacing low-income people. A few produced cameras of their own to document and ask more questions — and many grimaced after learning that Turner was unwilling to even meet with Boyle Heights tenants to discuss reasonable alternatives.

Since February, mariachis and tenants of a building at 1815 E. 2nd Street in Boyle Heights that Turner bought a year ago — to lure newcomer Millennials who are proving more than willing to blow half of their high incomes on rent — have been resisting displacement. Turner this year raised the rents in 7 units—some by$800 per month—an 80% increase for several.

For months, Turner has ducked requests from tenants to meet. But after a spate of bad press—the mariachis are, after all, globally recognized L.A. cultural treasures — Turner finally spoke with them. After that, he agreed to meet with his Boyle Heights tenants — but only under a curious condition. He would sit down with them he said—but only one person at a time.

His divide and conquer strategy backfired when tenants at 1815 E. 2nd Street refused.

It cannot be overstated how irreplaceable the Boyle Heights mariachis are — to the area, and to greater Los Angeles. If they lose their homes, just a block from famed Mariachi Plaza where they gather to awe locals and tourists with songs of Bolero, Serenata, and Corrido, they lose their ability to secure gigs at a moment’s notice while still maintaining their historic base of quinceañera and wedding clientele. The community strongly backs the musicians’ quest to meet with Turner. LA City Councilman Jose Huizar’s office has also asked that Turner negotiate a reasonable rent and resolve the issue.

“I am overwhelmed by the support of the community and of our fellow tenants,” says Enrique Valdivia, a mariachi who lives in the building. “My rent went from $1,020 to $1,825. Who can afford to pay that kind of increase? We are OK with paying an increase, but one that is fair.”

“I haven’t received the rent increase yet, but I am participating in the rent strike because I know that they will come after us next. I want to support the mariachis and show the landlord that we are united,” says Oralia Juarez, a tenant participating in the rent strike. “We are asking Mr. Turner to dismiss the evictions and meet with us to talk about a rent increase that is fair for everyone.”

And so, on a nippy November evening, a river of 80 defiant Boyle Heights protesters arrived at the sidewalk in front of BJ’s boxy abode, chanting “Housing is, a human right, and to defend it, we will fight day and night,” and “Inquilinos, dicen presente, luchando con dignidad por nuestro gente (Tenants, we stay present, we fight with dignity, we fight for our people).”

The group called out toward the McMansion, asking to meet Turner and discuss alternatives to his wild rent increases.

Moments later, six LAPD units raced up the street and spoke with the tenants’ legal representative. As no laws were being broken — it turns out the First Amendment is still in place in Los Angeles — the police stood by and observed. From within Turner’s home, a manservant, arms crossed and knuckles white, emerged.

He barked at the protesters and refused to answer any questions.

The goal of the Los Angeles Tenants Union, Union de Vecinos, and other allies remains — to open a dialogue with Turner. They seek a sensible resolution that allows the mariachis to continue generating cultural value in Boyle Heights while keeping food on the table and a roof over their families’ heads.

As we witness and get angry at what’s happening on the national stage, with trickle-up economics and absurd tax proposals, are we really going to sit around and pretend that a similar guilefulness isn’t washing over us on the local stage?

How much longer are Angelenos going to play mental gymnastics to justify routing out our low-income families—without so much as a dialogue?