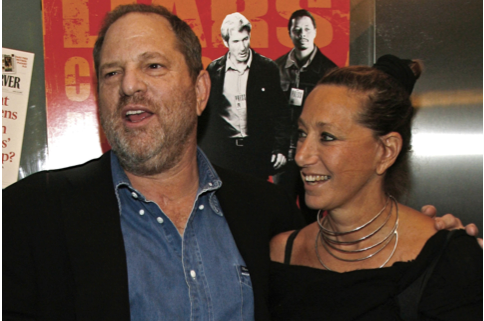 RESISTANCE WATCH--Do we really have to go over this again? It hardly seems possible that, once more, people need to be reminded that women do not bring on or invite sexual harassment or assault.

Yet here we are, with the ongoing investigation into harassment and assault by Hollywood producer Harvey Weinstein. While a few celebrities have spoken out against Weinstein’s deplorable behavior, many have remained silent.

But Donna Karan takes the cake, having been the latest diarrhea-mouth to claim that women are responsible because of how we present ourselves. Karan went on, “Are we asking for it by presenting all the sensuality and all the sexuality? And what are we throwing out to our children today about how to dance and how to perform and what to wear?” And of course Karan threw in the old atta-boy, noting that Weinstein, who settled sexual harassment suits with eight women and has now been accused by at least three of sexual assault, has done “some amazing things” and calling him and his wife “wonderful people.”

No, Donna, we are not “asking for it.” By definition, sexual harassment is unwanted sexual comments and gestures. What we are doing is dealing with it, and on a far too-regular basis. Surveys have shown that approximately one-third of women in the U.S. endure workplace sexual harassment like that perpetrated by Weinstein. If our daughters are being taught anything through this scandal it is that they might have to deal with disgusting old men saying lewd things and making obnoxious and inappropriate advances. These women, some of whom endured not just comments but unwanted groping and forcible oral and vaginal sex, are not teaching our daughters anything about “sensuality and sexuality.” Because guess what? Just like rape, sexual harassment isn’t about sexual attraction. It’s about power and control.

No, Donna. This is not about how women are “presenting themselves.” This isn’t about changing norms or some failed decency on the part of women or about mothers who aren’t raising their girls right. It is, however, about our continued inability as a society to teach men how to behave appropriately and to hold them accountable when they do not. Just days ago, I had virtually this same conversation with an elderly gentleman, who decried how difficult it is nowadays because he can’t tell a woman at work that she looks “sexy” without facing potential repercussions. Oh, the horror; you don’t get to say whatever you want! That must be a real threat to your manhood, to your belief that you have license over women. The nerve of these young women who don’t simply accept your garbage.

No, Donna. Weinstein is not a “wonderful” person. He is a dangerous predator who harassed, abused, and assaulted women left and right. There is no one-off here but a pattern of behavior that reeks of entitled masculinity. Like Bill Cosby and other powerful celebrities, Weinstein used his status to dominate women as if it was his birthright. The courage it took for these women to come forward against Weinstein, who used legal threats, payments, and his power in Hollywood, should be soundly applauded. Because as Ronan Farrow of The New Yorker reported, his behavior was widely known at Miramax and the Weinstein Company yet even witnesses and observers feared saying anything because they knew that Weinstein would crush them.

While much more will likely emerge about this situation, what should be ridiculously clear is that we still have a long way to go to make the U.S. a safe place for women and girls. That is the deeply sad reality. We do NOT need to go through this again. Act now. Let the RESISTANCE begin.

(Laura Finley, Ph.D., teaches in the Barry University Department of Sociology & Criminology and is provided to CityWatch by PeaceVoice.)