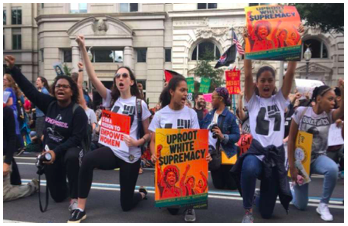 RESISTANCE WATCH--A coalition of thousands flooded Washington, D.C.'s streets on Saturday with one goal: "to create a just and equitable future for communities of color and others harmed by white supremacy, so that we may all thrive together."

The coalition declares on its website that the March for Racial Justice "is a black and indigenous led multi-community movement united in our demands for racial equity and justice." The seek to reverse "laws, policies and practices that hasten inequality, dehumanize people of color and maintain white supremacy," and march "because as long as U.S. laws, policies, and practices remain steeped in white supremacy, basic human rights and civil rights for all—our universal and constitutional rights—will never be fully realized."

Participants in Saturday's march—also marketed as the March for Black Women—passed the Trump Hotel and the Department of Justice on their way to the National Mall, where a stage faced the Capitol Building for a racial justice rally. Meanwhile, more than a dozen sister marches took place across the country. The organizers selected Sept. 30 in honor of more than 100 black sharecroppers who were killed in 1919 for daring to organize and demand better pay from white plantation owners.

Many shared on social media photos and videos of their signs and speeches, which called out discrimination that people of color often still face in the United States but also celebrated efforts to raise awareness about inequality and injustice. They addressed issues such as mass incarceration, police brutality, the NFL's #TakeaKnee protests, and the ongoing congressional battle to craft permanent legislation modeled on the Obama-era Deferred Action for Childhood Arrivals program for undocumented immigrants.

(Jessica Corbett writes for Common Dreams … where this report was first posted.)