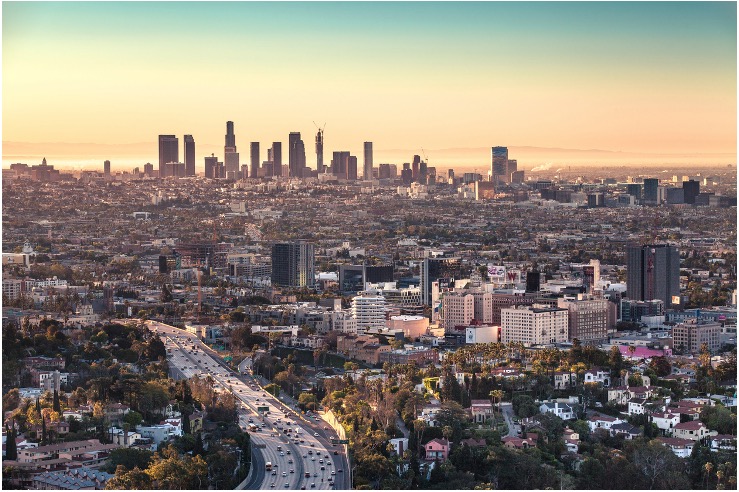 THE VIEW FROM HERE - People do not want to admit that a city can be full in that if more people are added, the quality of life for everyone decreases.

In face of L.A.’s decline, one would think Angelenos would recognize that excessive density is the cause of our eroding quality of life.

Excessive density does not just happen without causes.  All it takes is a corrupt city council which thrives on bribes and a population that slumbers on as everything gets worse. The most important factor is that a few people make fortunes by destroying Los Angeles.

Perhaps, one had to live in Los Angeles for four or more decades and be situated where the deteriorating is most obvious. Hollywood, Los Feliz, Silver Lake and nearby areas either were part of the decline or had a bird’s eye view.  The 1970's Hollywood had two things which present day Hollywood did not have: (1) lots of nice homes in need of rehab, and (2) hope.  Even though in the early 1970's Newsweek had chosen the intersection of Hollywood and Western with its porn shops and brothels as the most dangerous in the nation, there was an air of hope all around.

Hollywood became revitalized after a line was drawn down Franklin Avenue forbidding any density increase north of Franklin.  As a result, families felt financially secure to purchase older a Craftsman home north of Franklin and spend the funds required to upgrade.  This time frame was when Armenians were moving into Hollywood, establishing institutions and stabilizing the residential portions of Hollywood and the south part of Los Feliz. The dilapidated mansions in the Hills were likewise renovated.

By 2018, a homeless encampment was taking place underneath the Hollywood Freeway on Gower.  By May 2019, there were significant homeless encampments on both sides of the streets. In May 2022, the east side was filled with homeless tents with some tents on the center median.

A significant factor has been non-stop lies from City Hall and the developers.  When the population has dropped over 18,000 ppl, lack of housing construction cannot be the cause of homelessness.  If there were room for almost 214,000 ppl in 1990, there certainly would be enough room for 195,000 ppl twenty years later.

No, homeless people from around the world have not fled to Hollywood. If our homeless crisis were due to more people coming to Hollywood, the population would be increasing each year.  The cause is city council’s unanimous approval of the destruction of RSO units to make way for a new project.

While construction dollars appear to benefit Angelenos, that is an illusion. If you’re the councilperson for Hollywood CD 13, the destruction of the older RSO units to have boutique hotels and more fancy-smancy projects seems like a great idea. (We’ll leave it to the reader while figure why it benefits a councilmember to destroy his own district.) It does not take a math genius to figure out that when there is massive infill construction based on the destruction of the homes of poor people and the population is decreasing, those new units are not being occupied.  By all objective measures, Los Angeles is less desirable in 2022 than in 2000.

Does any person running to be a councilperson not support the false claim that failure to construct housing caused homelessness?  Which council candidate has been pointing out that if no RSO unit had been destroyed since Garcetti first took office in 2001, there would be enough housing for all poor people and Hollywood would have no homeless tents?  Which councilmember opposes giving billions of dollars to developers to construct affordable housing rather than a moratorium on demolition and conversion to boutique hotels? How many councilmembers admit that it is folly to try to construct affordable housing where land costs are highest.  For well over a decade the poor including minorities have been moving to the Inland Empire and the Antelope Valley.  Why not follow their example?

Elementary economics says that affordable housing should be constructed far from The Basin.  Why the mass construction in the Basin? Answer: Developers know that density increases their land values even when they are selling to narco-drug traffickers for money laundering.  Helping poor people relocate to very low dense areas where there are also jobs would reduce density and land values.

Another urban myth is that subways and fixed rail transit make it easy for the poor to get to jobs. No! This is myth has been debunked for 20 years.   June 28, 2018, Mass Transit Ridership Losses, by Wendell Cox It takes but a moment’s reflection to realize why people dislike mass transit.  Jobs are spread out similar all over Los Angeles, while subways and fixed rail cover about 5% to 10% of the city.  One has to walk to and from the fixed line station, while a driver starts at home and parks at his/her job. Not only is a car more convenient and safer, it is far more flexible; one can take side trips, e.g. stop at Ralph’s to buy some cereal for the kids breakfast the next morning.

Just as poor people do not like subways and fixed-rail, they don’t like being closed out of the American dream.   Sept. 28, 2021, Never Going Back, by Joel Kotkin   Minorities are not some weird deviants who do not want a detached home with a yard with space for fruit trees and the family dog.  Politicos and developers want poor people, especially the minorities, to live in high rises near freeways; after all such units are fetching about $1M each – enough for a nice profit even after the bribes have been paid.

Los Angeles is full -- stop densification. Which council candidate has the guts to tell the truth?