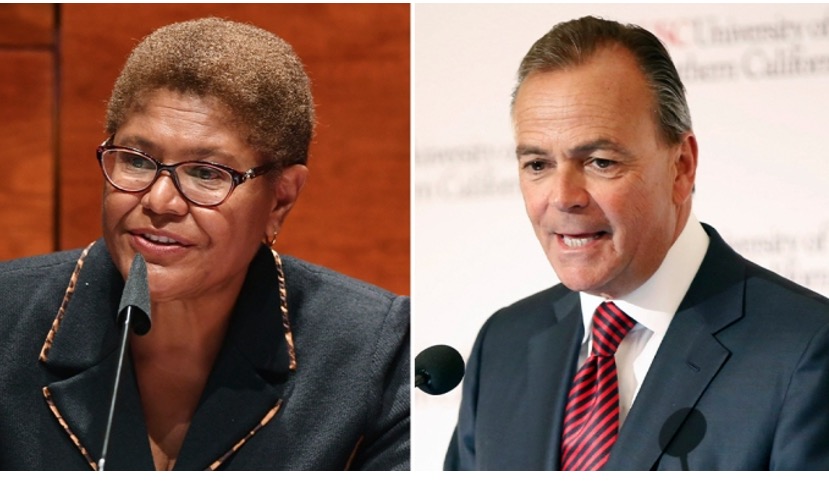 THE VIEW FROM HERE - June 7, 2022 may be the only election for Los Angeles Mayor.  Although it is called a primary, the two top vote getters do not necessary face each other in the November 2022 general election.

There is a run-off in November if and only if no candidate receives more than 50% of the primary vote.  What are the chances that Rick Caruso will garner more than 50%?

It does not matter how fast and loose Caruso plays with the facts or how much he aggrandizes his own record, there is no denying that the city is horrendously corrupt.  Unfortunately, Angelenos cannot add two and two and get four to figure out that the corruption has been developer bribery at City Hall which has trashed our Quality of Life.  Caruso, as King of Los Angeles Developers, has touted his buying of politicos such as Eric Garcetti, except Caruso and the LA Times do not use th word “bribery” for contributions to the Mayor’s Fund. Why no one has been busted for making these contributions is testimony to our ubiquitous corruption.  The fact that developers pay tens of thousands of dollars to Garcetti’s Mayor’s Fund in order to get his support for their projects is the definition of bribery.

Bribery is “the offering, giving, soliciting, or receiving of any item of value as a means of influencing the actions of an individual holding a public or legal duty.” Penal Code § 67  There is no requirement that the bribe goes directly into the mayor’s own pocketbook; only that the money is paid in order to influence his official decision.  In fact, a bribe does not have to be cash. It can be anything of value, like a city councilmember’s agreement to votes Yes on a measure if the ordinance sponsor agrees to vote Yes on one or more of the councilmember’s future proposals. (Penal Code § 86)   No one seems to notice that Caruso never denounces making huge contributions to Garcetti’s Mayor Fund, nor does he denounce the habitual bribery of a Vote-in-return-for-a-vote which runs City Council.  Caruso knows that Angelenos, similar to voters almost everywhere, only care about the circus aspect.

As the world saw with Trump-Clinton 2016 election, as long as the politico promises what the voters want to hear, reality is irrelevant.  When it comes to a Pull the Wool over the Voters’ Eyes contest between Trump and Caruso, Caruso makes Trump look like a novice.  Voters cast their ballots on appearance and not on reality.  Caruso provokes no backlash.

Here’s how slick Caruso and his new mini-me, former LA police chief Bratton (2002-2009), are at this game.  After Caruso took credit for the declining crime while he was head of the police commission, CityWatch pointed out that Caruso played no role in the decline in crime which started several years before he joined the commission and continued for years afterwards. https://bit.ly/3rzZiwY April 14, 2022, CityWatch, Did Rick Caruso Stop Violent Crime as Head of the Police Commission? Bratton said on Sunday’s April 24, 2022 Conan Nolan’s News Conference KNBC, that the drop of crime which LA had during Caruso’s time on the Police Commission continued for years after Caruso had left.  The false impression was that Caruso had done such a fantastic job that LA had the benefits for years. In reality, it was mere luck that Caruso served in the middle of a national, state and local down-turn in crime, which had a lot more to do with demographics than policy. Likewise, the decline in NYC’s crimes during Bratton’s tenure as Police Commissioner. (NYC’s name for police chief) began four years before Bratton took office in 1994 and like elsewhere continued for years after his departure in 1996.  https://bit.ly/3OAKyry April 15, 2016  The Atlantic, What Caused the Great Crime Decline in the U.S.?, by Matt Ford

Facts Mean Nothing, Perception Means Everything

Reality is irrelevant; belief is all that counts in elections.  There is no doubt that Caruso has proven to be the most adept Los Angeles politician Mayor Tom Bradley (1973-1993).  While Garcetti is smooth and served as Don of a virtual crime family which has ruined Quality of Life in Los Angeles, Caruso brings a Houdini level of expertise at political legerdemain.

Who Else Is Running?

They say that Rep. Karen Bass is running, but no one would know from her non-existent campaign.  What does she offer other than being a decent person?  From what one saw on Conan Nolan’s show last Sunday, nothing. How can she run against LA’s horrible Quality of Life when she has represented Los Angeles first in the State Assembly and then in Congress since December 6, 2004?  Caruso defined the issue and then the Lewis Center backed him up.

There Is Another Aspect to this Race, Which No One Will Mention. Race!

I do not mean that Karen Bass is Black which is a non-factor in Los Angeles.  Rather it is the crime wave by primarily Blacks.  Although the thugs were opportunists who capitalized upon the Black Lives Matter protests, Blacks were the prime group which attacking Asians. No matter how hard the Dem establishment tried to blame White people for the attacks, video after video showed Black attackers.  Jaqueline Avant’s murderer was Black.

With the follow-home robberies, the LAPD has announced that the prime culprits were 17 gangs from South Los Angeles.  One irony is that much of “South Central” is now Central American, but whenever the cops say “South LA gangs,” everyone hears “Black.” The homeless who have murdered citizens turn out to be mostly Black, e.g. the UCLA student in the La Brea furniture store and the nurse waiting for a bus in DTLA.

Karen Bass knows that the time to arrest is here and now, but her record has been in trying to build stronger and safer communities in order to prevent the rise of crime.  That is not a selling point in a city which feels under siege on election day.

If the present trend continues, Rick Caruso could eke out 50.01% win on June 7th.