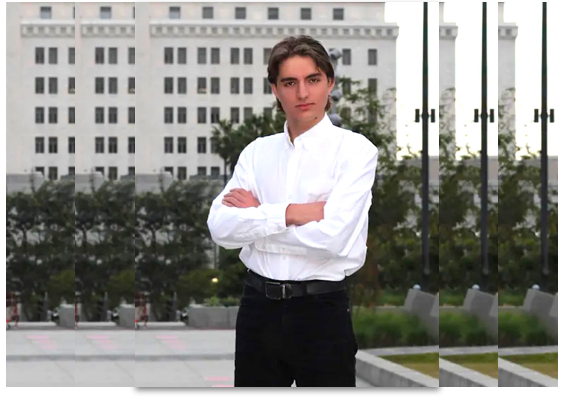 DEEGAN ON LA - Alex Gruenenfelder Smith is a big-tent, practical, Progressive running for Mayor, staking out room on the left-leaning spectrum for thoughtful reforms; preaching progress through supportable change, not by radically retooling how the city is managed.

That’ s a lot to chew on for a twenty-year-old aspiring politico. That’s because he had the ambition and nerve to burnish his political career by climbing the steps of City Hall in a run for citywide office. That’s because he wins even if he loses. That’s the start of a scrapbook.

So much of our civic discourse revolves around the same-old-same-old, from redundant and serial politicos, that transgressive breakout scenarios can capture lots of attention. Like a businessman with a bankroll, or a young guy with the oldest of dreams: to make it big in politics.

CityWatch caught up with the candidate on the campaign trail a few days ago.

CW-You appear to be one of the younger candidates running for office. How old are you?

AGS-I will be 20 years old on both Primary and General Election days.

CW-What local campaign did you support that you had the most impact with, that shows your leadership capability in a way that would benefit LA as mayor?

AGS-The model for what I’m trying to do here was as an advisor to Silver Lake Neighborhood Councilmember Maebe A. Girl, who placed 3rd in a Congressional primary in 2020. As an advisor I really got to cross over into jobs overlooking campaign strategy, where I developed skills in planning and policy platforms. That's the kind of role I've taken on multiple progressive campaigns. Our mayoral campaign has put out a detailed platform, but we need leadership and strategic skills to implement that platform. My work in the Echo Park Neighborhood Council and in various campaigns has prepared me for such a role.

CW-You are co-chair of the the Echo Park Neighborhood Council Planning and Land Use Committee. Do you agree with the idea of removing land use decisions from councilmembers and turning land use over to the Planning Department, under the supervision of the Mayor?

AGS-In my view the City Council does have too much discretion over planning and land use issues. This is not to say they should have no power, because they are a democratically elected body that represents people and that can benefit communities. But we need to build lots more than we do, and the only way is to have planning and land use duties passed away from Councilmembers and a politicized Council, to non-partisan leaders like those in the Planning Department.

CW-Are you seeking the support and endorsement of the Democratic Socialists of America-Los Angeles or Ground Game-LA?

AGS-We are seeking organizational endorsements that align with our vision for city government. Our message is resonating in some organizations. A number of Democratic clubs and Democratic organizations are supporting us. Regarding groups like the Democratic Socialists of America-Los Angeles, we have talked to their members, but the organization requires a very intensive commitment to the endorsement process and we need to be out there spending that time in the community.

AGS-Yes, we are potentially interested in a town hall. Our campaign has participated in multiple events that qualify for matching funds. We wanted to support candidates who may not be qualifying, and emphasize the importance of debates.

CW-Only selected candidates have been invited to the May 1 mayoral debate at Cal State. Rick Caruso has made this statement: “We should have a democratic debate that includes all of the candidates. I challenge Karen, Kevin, Joe and Mike to call on Cal State to include the candidates.”

AGS-Thank you to my opponent @RickCarusoLA for standing up for a truly democratic debate. The people of Los Angeles should get to hear from all of the candidates, and decide for themselves who is best to lead our city forward.

CW-If you don’t win, and if asked, would you serve in city government to get your political ideology inside the walls of City Hall?

AGS-I would absolutely be interested in a City Hall position, were I not to succeed in this election. I know some candidates who are not, but we are at a turning point as a city and we need institutional change. I'd be honored and grateful to serve in a City Hall role.

CW-How can voters learn more about you and your campaign?

Win or lose, Alex Gruenenfelder Smith can wind up with a big “W” next to his name.