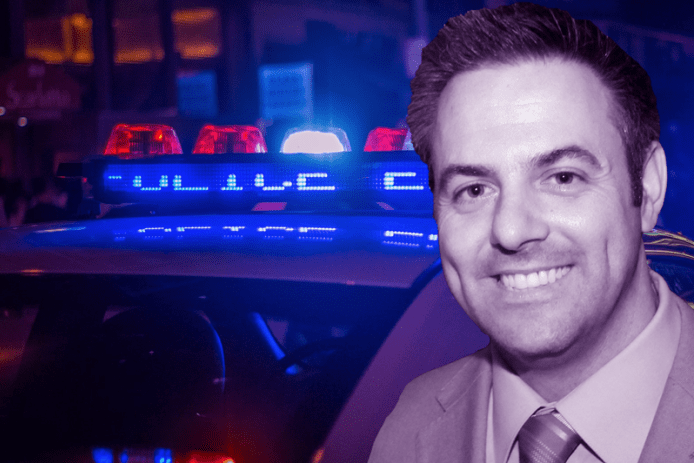 LA POLITICS - You can always count on Buscaino to take advantage of somebody else’s misery.

You may recall how Councilman Joe Buscaino burst onto the mayoral scene last year by grandstanding about the homeless issue on the Venice Boardwalk pointing out how his colleague Councilman Mike Bonin had screwed up. This, of course, was preceded by weeks of a whirlpool of TV media coverage sensationalizing the homeless issue there, but ignoring it in Buscaino’s own district. Face it. The homeless problem has been growing for decades before anybody admitted that it was indeed a crisis.

The Los Angeles City Council didn’t even have a committee to deal with the issue until the Central San Pedro Neighborhood Council created one out of sheer frustration with  Buscaino stalling on the issue.  Back in 2015, the Central San Pedro Neighborhood Council supported the construction of tiny homes and the local NIMBYs went berserk. True to form, Buscaino came to the rescue by creating a “homeless task force” with a group of handpicked cronies and spent 18 months formulating a plan that was never released. Meanwhile, he got busy pushing law enforcement tactics that even the police didn’t believe worked.

When Mayor Eric Garcetti embraced the Bridge Home concept, Buscaino suddenly found  political compassion for helping the homeless, grabbing as much of the spotlight as he could while slow walking all other logical solutions that would soon become acceptable — like the Tiny Home villages. Only then did he come around to seeing the vision that certain citizens of his district, including myself, had championed from the beginning.  My assessment is he’s a follower not a leader, except when he’s calling for more police.

Buscaino only adopted the tiny homes solution when  the name was changed to “pallet homes” and placed  at a distance far from his hometown of San Pedro – and even then only begrudgingly so. I think his change of heart had to do with Judge David O. Carter’s homeless hearings in council chambers. I have said it before and I’ll repeat it here for the hard of hearing,  if ordinances could solve the homeless crisis, it would have been solved a long time ago.

Somehow Buckets Buscaino, as he is known in the district, has convinced a majority of his city council colleagues to pass his latest political theater act over to his mayoral opponent, City Attorney Mike Feuer, to write up this bright idea so that it won’t be unconstitutional. The four dissenters, Mike Bonin, Nithya Raman, Marqueece Harris-Dawson and Curren Price, called out this needless act of grandstanding. Raman rightly pointed out that blocking any public right-of-way is already illegal, as is bike theft, which is what Buckets seems bent on preventing. And yet this proposed law would specifically target one class of people, would use more police to enforce and in the end would only clog up the courts with cases that if they were convicted would be misdemeanors and released. Does anyone see the problem  with this scenario?

In an April 12  press release  Buscaino attempted to capitalize on the New York City subway attacks in support of his mayoral hopes. He announced he was introducing a motion that would request for city and county safety and transportation agencies to review their approach to preventing violent crimes in transportation systems.

Clearly, this goes along with his commitment to hire more than a 1,000 more police officers, which is contrary to the growing consensus that the key to staunching the precipitous rise in crime is by shifting money from the police budget to hire more mental health professionals and take more guns off the streets. Every police officer I know admits that we can never arrest our way out of the homeless crisis. And it is rather self evident that even if we could afford doubling the police force that even this would not reduce crime or homelessness. I’ve said it before that Buscaino is a man with a hammer who views every problem like  a nail.  Even his Safer Streets LA campaign, a city measure for the June 2022 ballot, claims to  “educate voters about proposed solutions to the homelessness crisis,” but is really a thinly veiled attempt to normalize homeless sweeps, because homeless encampments  are “unsightly,”  when the word Buscaino is looking for — to describe 44,000 unsheltered people living on the streets in one of the wealthiest cities in California — is “unconscionable.”  Buscaino’s solution would only provide beds for 60% of this population, a number set by a federal judge. The other 40% he would  just chase off the sidewalks because he doesn’t like seeing them?

This is a one-dimensional solution for an octagonal problem and Buscaino is vacuous when it comes to complex algebraic analysis.  The city should be forewarned before going to the polls on June 7.

By contrast, I had the chance to interview Kevin de León, one of the other mayoral candidates, last weekend.  He’s only been a councilman for some 18 months and claims to have built more housing in his district than any other councilperson. That may  just be talk for the campaign trail, but what I can tell you is that he gets the multi-dimensionality of the homeless crisis. He’s able to speak extemporaneously on the intersectionality of issues and causes that plague the poorest sections of this wealthy city. He understands the connection between port pollution, environmental racism, lack of job opportunities because of our global import economy and the violence on our streets.  He’s not a one-dimensional man. Buscaino is.

As Buscaino drops in the polls and as the discontent with his real performance in the 15th council district becomes better known, I predict that when the June election results are counted, Buscaino will probably not even win his own district because of the discontent he has sewn amongst his own constituents.

(James Preston Allen, founding publisher of the Los Angeles Harbor Areas Leading Independent Newspaper 1979- to present, is a journalist, visionary, artist and activist. Over the years Allen has championed many causes through his newspaper using his wit, common sense writing and community organizing to challenge some of the most entrenched political adversaries, powerful government agencies and corporations. This story was featured in RandomLengthsNews.com.)