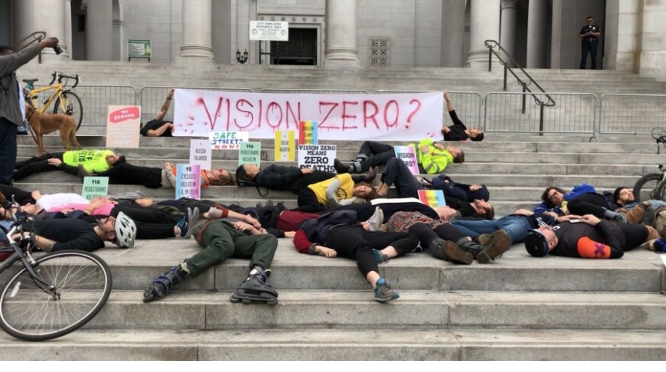 Like many of the Mayor’s other lofty projects and goals, “Vision Zero” has been a complete failure with more deaths and injuries occurring on Los Angeles streets year after year.

As you can see, Mayor Garcetti’s Vision Zero has failed to protect the residents, motorists, pedestrians, students, and visitors to the vast array of neighborhoods throughout Los Angeles.

It wasn’t that long ago when Los Angeles officials increased the speed limits on  a variety of streets to qualify locations for radar enforcement.  Now the city is reducing the speed they increased by 5 mph on 177 miles of city streets due to the continually increasing number of Fatal and Injury traffic accidents.

Think how many thousands of dollars the city will spend constructing and installing new speed limit sign throughout 177 miles of city streets.

While this is taking place, the total number of motorcycle officers has been reduced along with the reduction and retirement of hundreds of LAPD Officers.  When was the last time you saw a B/W LAPD unit or motorcycle officer making a traffic stop or issuing a traffic citation on a city street?  Most likely you may have seen a B/W unit on patrol at best, but not stopping motorists or issuing a traffic citation.  For this reason, compliance with traffic laws has not been a priority for many motorists.  The end result, more traffic collisions and injuries to both motorists and pedestrians.

As the number of LAPD officers continues to drop due to retirements and the lack of interest in a law enforcement career, the challenges of providing public safety to the people of Los Angeles continues with reduced personnel and dwindling resources.  The Defund the police movement across the country in major cities has seen a dramatic drop in police recruitment and increased retirements.  Why would anyone want to risk their lives for an uncaring community and elected officials who implement programs to DEFUND the police and demonstrate lack of respect and support for those that wear the badge to “Protect and Serve” the community.

On June 10, 2017, there were 9948 active LAPD Officers on the LAPD’s personnel books.  Nearly five years later on March 12, 2022, the number is currently 9,426 LAPD Officers.  That is a reduction of 522 officers in just 5 years.  When you consider the total number of officers, remember that includes all sworn personnel from the Chief of Police to the recruit in the police academy.  In addition, you must further reduce that number for those who are off duty for a host of reasons.  Military Leave, Vacation, Sick, Training and the rest of the associated reasons why officers are on days off.

The continuing challenges of providing public safety to the growing and diverse population with the “WOKE” mentality and hostile attitudes toward the police and frequently impeding officers from their mission to “Protect and Serve”, the challenge becomes more than most can handle.  The result is fewer police officers available to serve the community.

It might be time for you to get involved in your local upcoming political elections.  You can vote to elect new candidates who will hopefully turn Los Angeles around and establish safe and clean communities.  The Mayor, City Attorney, Controller, and many City Council seats will be up for election.  55 candidates have qualified for LA’s primary election on June 7.  Stay tuned for the RantZ and RaveZ Election Special that will recommend candidates for you to support and vote for.

If you are tired of the current City Hall corruption, squandering of your tax dollars and elected officials that have turned L.A. into a dirty city with out of control homeless, increasing crimes and a shrinking police department, you will want to join me and change direction at City Hall.  I will give you the tools to do just that.  Stay Tuned….

(Dennis P.  Zine is the author of RantZ and RaveZ.  The column runs twice a month and brings you a unique view of the ups and downs in and around Los Angeles from a combined 54 years of law enforcement and elected public official’s perspective. )