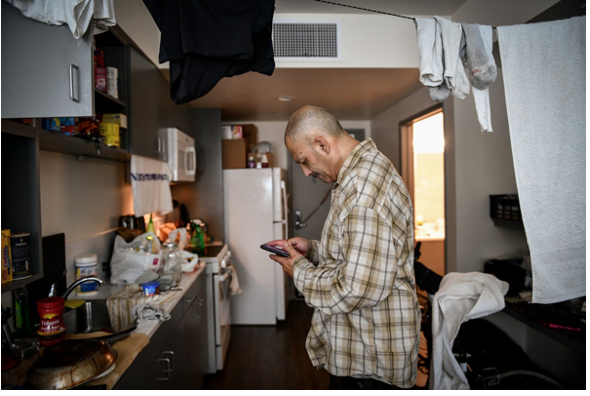 HOMELESS CRISIS - By the lone tent under the cement overpass, just visible from the Hollywood Freeway, Fernando Maya waited with several backpacks stuffed with clothes, electronics and food.

Once a constant roar of traffic below his makeshift home, the freeway stood empty in the waning days of spring 2020 as the first wave of coronavirus tore through California. Here, occasional cars whipped up gusts of wind, their whistles morphing into the voices of people he had let down.

A car pulled up alongside a chain link fence that separated a service road from Maya’s camp. He hadn’t taken down his tent, raised from the dirt by a wood pallet to let rats pass. He was leaving and he didn’t know how long he’d be gone.

Maya slid into the back seat, his mind spinning with doubts. At 6-feet-1, the 56-year-old brimmed with an energy that could swing from charming to intimidating. When agitated, he slung his words faster, then harder.

“I don’t want to go anywhere where there’s a curfew,” Maya said to the driver, Jorge Soria, his case worker. “I don’t need the headache of having to follow directions.”

“You’re getting a good place, but it’s not like a free-for-all,” Soria recalls saying as he pulled the car forward. 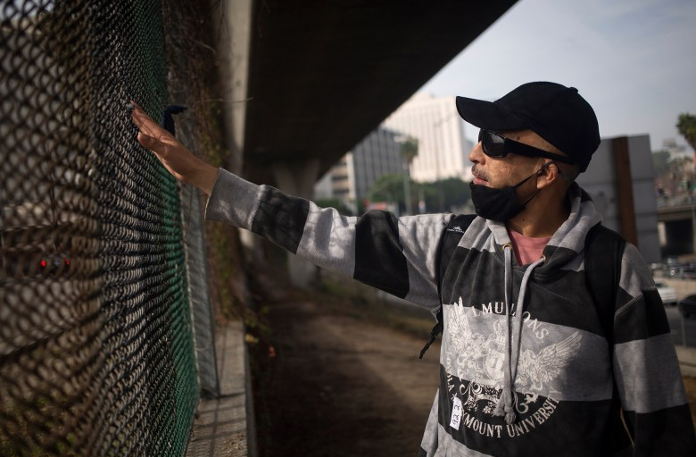 Fernando Maya under the overpass where he lived in a tent off of the 101 Freeway in Los Angeles on Nov. 17, 2021. Miguel Gutierrez Jr., CalMatters

California’s pandemic response marked the start of Maya’s journey indoors. Through Project Roomkey, the statewide effort to take vulnerable and elderly people off the street, he was given the keys to a hotel room of his own that June. Later, Maya would credit the program — and Gov. Gavin Newsom — with having ended his homelessness.

I can tell you this much my time for sitting on my hands waiting for help is over. P Proactive approach to everything that gives me an opportunity to get off the streets for good is the only thing I want by the end of this year. I can see that I can’t waste any more time . My camping trip is finally over. I really want to see and do so much so many things that can help me to develop my qualities that make up who Fernando Maya really is.

Over the course of a five-month stay at a hip West Hollywood hotel, Soria helped Maya renew his application for a federal housing program for veterans, in an apartment complex with 90 affordable units set aside for people experiencing homelessness.

BREAKING NEWS%…. all thats left is housing authority to call for background check . meaning i should be in my own apartment maybe by holloween

we are now finally in the home stretch..Finally!

By September, his application was approved. The state would claim Maya as a successful transition into permanent housing — on paper at least.

So-called permanent supportive housing programs like Maya’s — which pair ongoing rental assistance with supportive services such as case management, substance use programs and mental health treatment — represent the gold standard for housing chronically homeless people such as Maya. For every one open unit in Los Angeles now, about seven people are waiting.

Having slept in the alleyways, underpasses and sidewalks of Los Angeles throughout much of his adult life, Maya longed for a place to call home. A chameleon by nature, Maya assumed he would transition quickly, just as he had adapted to the Navy, prison and living in a tent. He’d have his own keys, his own coffee maker. Safety. Ease.

He didn’t think the hardest part was yet to come.

California is trying to increase capacity. Last year, state lawmakers approved a $12 billion two-year plan to tackle homelessness. According to the Newsom administration, these investments would convert 35,000 hotel and motel rooms into permanent supportive housing over five years, growing California’s stock by over 50%. This month, he proposed another $1.5 billion to place people with complex behavioral health issues in tiny homes and other temporary housing while they wait for slots to open.

But demand outstrips supply. While conservative estimates put the total number of chronically homeless Californians at around 49,000, it’s been growing each year. The vast majority live outside and about half live in Los Angeles County.

If the state executes its plan, tens of thousands of people like Maya, sick and scarred from years of living on California’s streets, will finally come inside all at once. Whether they get the support they need to stay housed will determine the future of California’s homelessness crisis.

On the morning of Oct. 28, 2020, Maya packed his life into plastic bags and duffels once again, leaving the upscale hotel behind. He loaded his belongings into Soria’s car, and the two men drove east.

Sandwiched between the Hollywood Freeway and a busy boulevard lined with auto shops, the brand new apartment complex towered six stories over a commercial zone where little else was as modern or sleek as the building’s white, red, gray and glass exterior. Maya had grown up just blocks away.

He carted his belongings past a debris-filled encampment of tents that snaked around the building, then through the glass front door, and into a pristine courtyard of cement and manicured lawns. 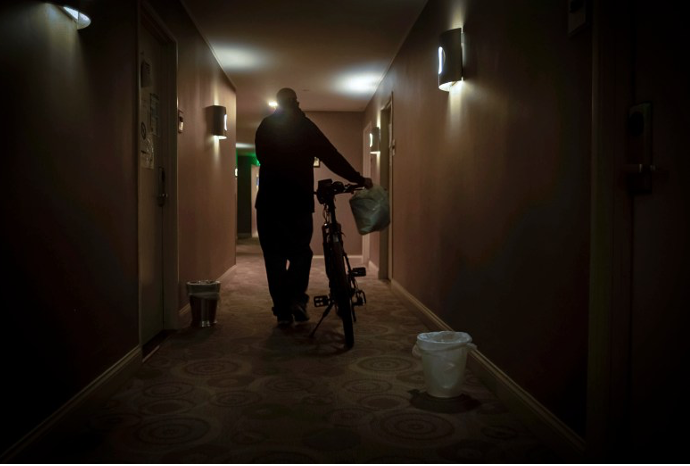 In preparation for his move, Fernando Maya rolls his electric bike down a hallway of the hotel where he lived for five months as a Project Roomkey tenant, on Oct. 28, 2020. Photo by Tash Kimmell for CalMatters 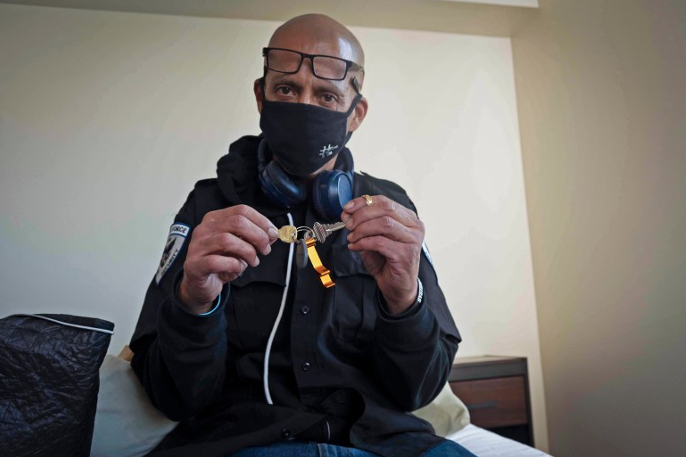 Fernando Maya holds the keys to his new apartment, shortly after moving in. Photo by Tash Kimmell for CalMatters

Maya waited, jittery with coffee and anticipation, in a room strung with Halloween decorations where residents watched a communal television.

Minutes after signing his lease, he surveyed his new studio. Shaped like an L, the unit opened into a galley kitchen that widened into a bedroom, already equipped with a bed and dresser. Maya bid Soria goodbye, thanking him profusely for his help. Having secured housing for his client, Soria would soon clear Maya from his caseload at The People Concern, a nonprofit provider of housing and mental health services in Los Angeles.

Several days later, sitting at his new kitchen table decorated with a flowerpot of pens, Maya contemplated his goals.

Decades of stimulant use had left his face gaunt. His smile revealed rotting and missing teeth. But while at the hotel, Maya had gained 10 pounds that filled out his pockmarked cheeks. A red lanyard hung around his neck, weighted by his new apartment keys. He felt optimistic.

He said he wanted a real job before the market locked him out for good. His housing voucher subsidized his rent so it only ate through $52 of his $221 monthly cash assistance. He still wanted to prove to the world — and to himself — that he had something to contribute.

He wanted to visit his mother, now in her early 80s, whose life waned as she battled an alphabet soup of immunocompromising illnesses. They’d only spoken on the phone twice in the past five years or so, both times at the start of the pandemic.

Now she lived an 8-minute bike ride away, but something told Maya he wasn’t ready. He wanted to show her a version of himself that she would finally be proud of: drug free and employed.

In 2016, California created a homeless coordinating council and adopted a model known as housing first for all state homelessness programs.

The model, pioneered by a psychologist in New York in the 1990s and soon embraced by the federal government, is straightforward: End a person’s homelessness by getting them into a permanent home as quickly as possible, regardless of whether they use drugs or alcohol, or participate in treatment. Offer them hands-on counseling once they’re inside. Let them choose where they live and which services they receive.

In contrast with how service providers had operated for decades, this approach viewed housing as a tool, rather than a reward, for recovery.

Extensive research shows that permanent supportive housing that follows this approach works better, especially for chronically homeless people. They stay housed at higher rates, reducing the taxpayer costs they would otherwise rack up in shelters, jails, ambulances and emergency rooms.

Critics, including the previous homelessness czar under former President Donald Trump, say that the model hasn’t proved its worth, as homelessness skyrockets. Several conservative think tank voices point out that housing first has a mixed record when it comes to addressing serious mental health issues, substance use or employment. Others argue that it writes a blank check for rent, without moving people toward the goal of self-sustainability.

Republican state lawmakers called housing first “the most expensive and difficult policy” this month when they implored Newsom to declare a special legislative session on homelessness. Proponents insist that their aim is more realistic and less paternalistic: to permanently end a person’s homelessness, and help that person achieve individual goals. But the plan only works if it’s executed well.

A team of University of Southern California researchers found that the reality often falls short. In a pre-pandemic study of 26 housing first programs in Los Angeles, residents tended to report social isolation and unchanged substance use after their first year, though their mental health significantly improved. Most said they received little assistance from the in-house support team, contributing “to tenants’ isolation, difficulty navigating a complex health and social services system, and inability to develop additional life skills.”

The housing supervisors described offering comprehensive case management, primary and mental healthcare and substance use treatment, but the researchers’ interviews with frontline staff revealed gaps. Case workers reported that a patchwork of outside agencies providing services were difficult to communicate with. Caseloads averaged 36 residents per staff member — far higher than the recommended caseload of 12 to 15 — and staff struggled to focus on anything more than keeping people housed.

Understaffing, turnover and burnout plague homeless services throughout the state, as California faces a growing shortage of providers, including psychiatrists, psychologists, therapists, clinical counselors and social workers. COVID-19 has only exacerbated staffing shortages.

So people fall through the cracks. According to research by the California Policy Lab, at least one in five people placed in permanent supportive housing in Los Angeles between 2010 and 2019 returned to homelessness.

(Jackie covered income inequity and economic survival for the The California Divide collaboration from 2019 through 2021. She was awarded a Pulitzer Prize in Explanatory Reporting in 2021 for a Reuters data-driven investigative series that examined “qualified immunity,” a legal doctrine that shields police who use excessive force. Jackie is a Report for America corps member. This story was featured in Cal Matters.)