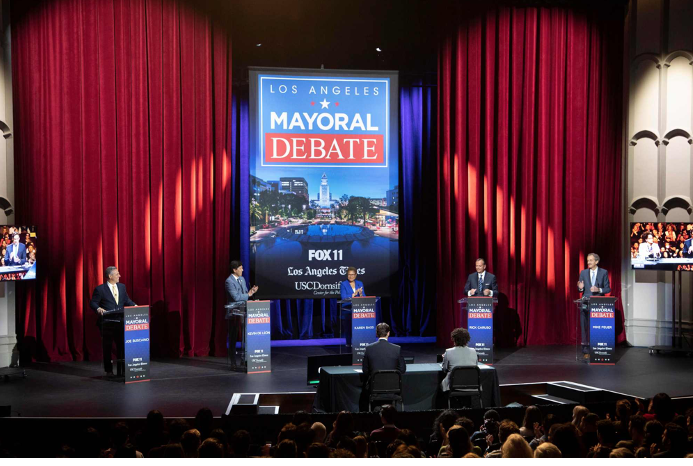 THE VIEW FROM HERE - First, The Bad:  To no one’s surprise the debate-charade concealed Los Angeles’ core problem.

Its government has a feudal format with 15 fiefdoms and the city council operates as the criminal enterprise contrary to Penal Code §86.  That means each city councilmember is a felon and that is why no one will admit reality.  How does a society handle a city council which has racked up over one million years of prison time?  (Four years per violation with over 99% unanimous Yes votes since 2006 is actually over 2 million years prison time, if each got the max for each illegal vote.) As they say in banking, “If you owe the bank $100,000.00 which you cannot repay, you have a problem. If you owe $100 Billion, the bank has a problem.” So let’s move onto the good of the debate-charade.

Elex Michaelson and Erika D. Smith merit rave reviews and a chorus of bravos.  Both were well prepared, and they dealt quite well with a gaggle of politicos and one unsavory billionaire.  They allowed each candidate to show their personality. The Spanish term, modo de ser, which I translate as “way of being” may be more appropriate.  Colloquially in English, “showed their true colors.”  One got an insight how each would behave as mayor.

Previously, developer Rick Caruso was characterized as King of LA Developers, but last night he revealed that a new appellation is in order.  True to form, the Pravda West’s (LA Times) characterization of the debate and Rick Caruso was absurd, “and all the candidates were polite and respectful in tone.”  LA Times writer,  Mary McNamara, did a typical LA Times propaganda job of rewriting history to make Rick Caruso into the night’s hero.

If the debate had been a character assassination competition, then Caruso was well prepared with his distorted views of the others’ foibles which he would interject more or less randomly.  Yes, City Attorney Mike Feuer has some explaining to do with his unethical dealings with the DWP rate case before Judge Elihu Berle, but Caruso reduced that complicated issue to something akin to “Have you stopped beating your wife?”  Likewise for Caruso’s comments about Councilmember Buscaino’s legitimately taking his wife and children on business trips with him. If and when this column discusses Feuer and his DWP case, it will be analytical and not a misleading cheap shot.  Caruso’s repetitive use of slanted ad hominem attacks reveals that he is a rattlesnake in a serpent’s skin.

Time to give Councilmember de León  a second look.  Along with Rep. Karen Bass, de León did not appear to be there solely for himself, while only pretending to care a tinker’s damn how many homeless die on our streets.

Buscaino exhibited a stereotypical “cop mentality.”  While police officers are crucial to any well functioning city, mayors need a different skill set.  While Bass, Feuer, and de León probably recognize the criminal nature of LA’s city government, it seems that former police officers like Buscaino and ex-councilmember Mitch Englander (LAPD reservist) fail to appreciate the nature and extent to which the city is a criminal enterprise.  Englander was so blind that he was actually sentenced to prison due to his overly enthusiastic participation.

My advice to Karen Bass is to retire. She is too good and too decent and has done more than her share to improve not only Los Angeles but the nation as a whole. Karen Bass, however, is not one to retire. If she’s alive and kicking at 110, I expect she will be doing her best to make life better for everyone else.

Here’s What Karen Bass Will Face as Mayor

The state constitution forbids political parties on city councils.  Unlike her prior government service where one could accomplish goals by having a majority of one’s own party in power, there is no party mechanism at LA City Hall. Corruption becomes the default mode of goervance.  Each councilmember controls his/her own district and needs nothing from the mayor.  All that a councilmember need do to accomplish whatever he/she wants is vote Yes for every ferkata project which another councilmember places on the city council agenda.  Then, the favor will be returned.  Otherwise, nothing the councilmember wants will be approved by the others. As mayor, Garcetti could assert himself into the system since he had presided over it as Council President and he knew where so many bodies were buried.

Because the city’s economy is based on continual construction, stopping the densification mania does not seem feasible.  The absurd demands for more subways and light rail are likewise scams to funnel billions more dollars to multi-billion dollar construction companies, leaving Angelenos with unbearable debt. Let’s be clear: HHH and JJJ were never intended to construct a single unit of affordable housing. They were a device for the city to give over $1 Billion to developers on the pretext of building affordable housing. All those affordable units disappear in bankruptcy so that the developer keeps all the city money and gets 100% market rate housing. Meanwhile, LA taxpayers have to repay Wall Street plus interest.

Of course, the affordable HHH units which should cost $200K each are costing up to $800K and projected to go to $1 per unit.  One need not be from New Jersey to figure out where the extra $600K to $800K is going. One way or another the HHH money was always going to the developers.  After the Sunnyslope case, the question was “How?”

Suppose all The Homeless Disappeared Overnight

If we dumped all the homeless in the desert, the streets would be clear for a while, but Los Angeles would still be a criminal enterprise and the thieves would concentrate on one thing: how to scam every cent they could from the city, state and federal taxpayers.