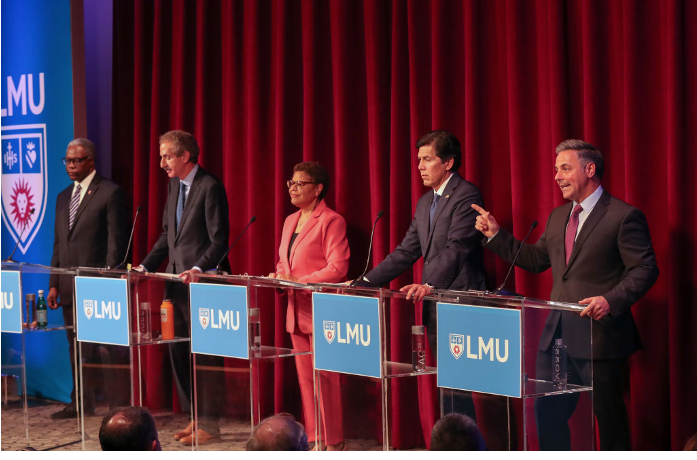 LA MAYORAL ELECTION - Is there any among us so naive to think that the Los Angeles mayoral debate scheduled for Tuesday, March 22nd will be anything more than a non-stop stream of BS? BS is too mild a term for the caca-doodoo which the candidates and the moderates throw at us.

In LA parlance, “debate” means “charade.”  All the candidates, who are allowed to participate, have already agreed that any mention of the corruptionism which has run Los Angeles since 2001 is verboten.  Instead, they have all agreed that Homelessness is the city’s number one problem, and the somnolent public will mindlessly assent.

Los Angeles’ Homeless Crisis is a problem in the same way that Ukrainian apartment houses mysteriously crash and burn, killing thousands.  LA media’s blindness to the massive corruptionism which has ravaged the city is akin to how Russian State TV never mentions the missiles, which Putin is firing into civilian residences, hospitals and theaters.

Will LA have a brave assistant producer stand behind Elex Michaelson with a sign saying, “Don’t believe the propaganda. They’re lying to you here.”  The Homeless Crisis has a cause but all the candidates and all the media outlets agreed not to mention the cause.  Rather, the debates will be filled with the equivalent of Hollywood audition tapes where each candidate will show why he/she will be the best Fearless Leader to rescue us from the emergency.  Eighty years ago Charlie Chaplin lampooned Hitler, but in today’s mayoral race, such comments hit too close to home to be allowed.

Similar to the “Emperor Wears No Clothes,” candidates will not admit the obvious.  By 2000, LA City Hall knew that the population surge of the 1970-1980's was over.  While Los Angeles might add a few more people, the rate of increase was de minimis. Hollywood’s population, for example, had declined from 213,858 ppl in 1990 to 210,824 ppl in 2000. By 2010, it was down to 198,288 ppl. Within the foreseeable future, city’s over all population would actually drop. The high point was 2016 with 3,976,000 ppl, but by the 2020 Census, the city was down to 3,898,747 ppl.  The fact the city was shoveling out Lies and Myths to justify further densification was judicially acknowledged by Judge Allan Goodman in January 2014 when he said the city “intentionally used fatally flawed data.”

The corruptionism, which follows unrestrained power, destroys a city or a nation.  The average Russian has less wealth than the average person in India: Russia $871 vs. $1,000 India, (2013 dollars). Due to the vast city hall corruptionism and its developer-oligarchs, Los Angeles has the worst GINI Coefficient of any US urban area (GINI = gap between the poorest vs wealthiest). White households in Los Angeles have a median net worth of $355,000. Mexicans and U.S. Blacks have a median wealth of $3,500 and $4,000, respectively.  That is about the same as Kenya $3,683.

Los Angeles is addicted to construction the same ways as Afghan warlords were addicted to growing opium.  Like other addicts, Los Angeles will crash if it does not get its daily fix.  Addicts will steal anything, and no lie is too great not to tell.  The city stole and destroyed the homes of LA’s poor, throwing them on to the streets so that developers could construct fancy apartments and boutique hotels, which Russian oligarchs among other unsavory international operators used to launder money.  The city council knew it was creating a massive homeless crisis just as Putin knows he targets civilians.  Judge Richard Fruin in December 2016 gave the city council judicial protection by ruling that the city council’s actions were de facto “non-justiciable,” i.e., above the law.

The Big LA Lie Is That We Have a Housing Shortage

With tens of thousands of vacant units and LA’s losing people, especially among the Family Millennials, LA cannot have a housing shortage.  Nonetheless, each mayoral candidate promotes the big lie that we have a housing shortage and encourages more densification. They then show photos of the homeless, but not of the thousands of vacant apartments where they will not allow the poor to live.  April 21, 2016, Zwartz Talk, Help Los Angeles Now!!!  This article was months before Judge Fruin’s decision; so do not think the judge was unaware that he condemning thousands more to homelessness.  Literally thousands died on the streets just due to the fact that they had been made homeless.

City Council is a Criminal Enterprise

Criminal oligarchs have no shame: The LA City Council openly operates as a criminal enterprise due to its Vote Trading System which Penal Code § 86 makes a felony. Although each of the candidates has been asked whether Penal Code, § 86 applies to the city of Los Angeles, none has responded.  If they admit the truth, then what will they do to stop it? If they deny P.C. § 86 applies when it expressly includes city councils, how can they exclude LA city council?

None of the Mayoral Candidates Wants to Stop the Corruption; They Want to Become the Don

If each and every developer were not guaranteed 100% approval of his project by the councilmember in whose district he wished to construct some monstrosity, LA would not be free-fall.  Because all a developer needs to do is bribe one councilmember and make a donation to Mayor Garcetti’s “charity” in order to get unanimous approval, it is impossible to stop the densification which has destroyed Los Angeles.

Will Any Member of the Press Make the Candidates Admit the Truth?

That would be a career ended.  The format for these charades is the same. Each candidate gets a chance to make his/her spiel and is never forced to answer a real question.  While there may be a soft ball lobbed at someone, no actual answer will be required.  The public is entitled to see each candidate subjected to the third degree. As they squirm, each trite response should be debunked on the spot.

The sycophants, er moderators, could start using a better style question which reduces the politicos’ wiggle room.  Then, there should be follow-up questions to expose the candidate’s evasiveness.

“Is it not true that Penal Code 86 applies to the Los Angeles City Council?”

“Is it not true that Los Angeles has more than 90,000 vacant apartments and houses?”

“Is it not true that on November 17, 2015, the city’s HCIDLA committee said that in 2013 ‘Los Angeles added 37 percent of the needed housing for low-income residents but nearly 150 percent (5,874 units) of the units needed by above moderate income earners.’”?

The 24,021 loss averages over 1,400 RSO units lost each year without counting all the illegal evictions so that by the end of 2021, 4,239 more RSO units were destroyed for a total of 28,260 destroyed units. At an occupancy of 2.5 persons per apartment, the homes of over 70,000 poor Angelenos were destroyed just under Ellis Act evictions in order to increase the glut high end projects.  We have only 41,000 homeless.

Angelenos can be certain of one thing: The March 22, 2022 debates will cover up the mass destruction of poor people’s homes and will instead focus on giving billions more dollars to developers for construction in high density areas. Why high density areas? Because that is where the oligarchs have bought land. Where is our Marina Ovsyannikova?