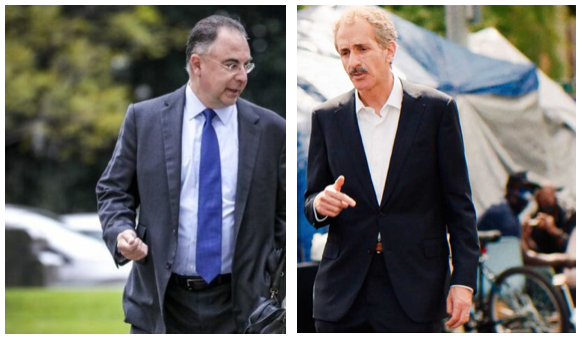 That’s right.  Our wannabe Mayor and self-declared model of probity Mike Feuer, is up to his ass in trying to avoid the California Bar. Even as Paul Paradis, hired by him to do the dirty in a billing scheme underlying the Department of Water & Power’s “new” billing system, gets ready for jail.

What makes the whole thing interesting to me, is a recent Report from our Ratepayer Advocate, Fred Pickel and his merry band of scientists.

A great article by Justin Kloczko, lays out the legal scheme in riveting detail:

“Ohio Attorney then secretly paid $2,175,000 to Paradis, disguising the kickback as a real estate investment, and funneling it through shell companies that Paradis and Ohio Attorney had set up exclusively for the purpose of transmitting and concealing the illicit payment,” according to prosecutors.

“The investigation is ongoing,” said Ciaran McEvoy, public information officer for the U.S. Attorney’s Office in the Central District of California.

Paradis was one of two special counsel hired by City Attorney Mike Feuer’s office to defend lawsuits by utility customers over incorrect bills. The case eventually settled for $67 million, but cracks in the settlement emerged when it was revealed the underlying lawsuit and subsequent settlement were drafted by Paradis. Federal prosecutors are describing it as a “collusive lawsuit.”

Attorneys fees in the LADWP case ballooned to $19 million over time, with Landskroner taking home the lion’s share at $10.3 million. Although a recent court-appointed investigation cast Feuer’s office in a bad light, saying high-ranking officials “all knew most or all of this three-part plan,” what remained to be seen was the paper trail.”

For a little more context of the players, here’s a snippet from the LA Times:

“The city entered into an initial settlement agreement with Ohio attorney Jack Landskroner in 2015. Landskroner, who was never charged with a crime and died last year, collected $10.3 million in attorney fees in the case — money that came from the DWP.

An attorney for the Landskroner estate declined to comment.

Federal prosecutors refer to an “Ohio attorney” in court filings but have not named him. The Ohio attorney secretly funneled $2 million to Paul Paradis, an outside lawyer brought in to work for the city attorney’s office on the DWP billing litigation, prosecutors said in Paradis’ plea agreement.”

The Office of Public Accountability Report

I know it’s an unusual name for the Ratepayer Advocates Office, but there you have it. If you click on this link, you will be at the Ratepayers Advocate website.

From there, you can see a section called ‘Latest Documents’.  The top one has the title of “OPA Report at DWP Board Request on Governance and Recommendations”. Click on the link and you will discover a 22 page pdf document which will rock your socks with essentially a forensic audit of the Department’s doings, guided by the City Attorney and allowed by the Mayoral appointees to the DWP Board.

One important note - this Report is authored by the OPA Staff, and they are all essentially scientists. I say this because they write with dry precision, unlike the purple prose that CityWatch contributors are fond of.

Skip page one, which is the deliverables to the DWP Board which were asked for. Read the rest and weep. It meticulously goes in chronological order to detail the suborning of what is actually one of the best and most cost effective public utilities in the State.

The problem is that they are a “Council Controlled Department”, which is a polite way to say that our Mayor and City Council get to make them do all kinds of stupid and evidently criminal things, without any real public scrutiny.

At least until the Ratepayer Advocate came along and shows what really happened beneath the surface.

Here are a few of my favorites:

- OPA had an opportunity to observe through complaints that DWP’s collection practices were sometimes more like tax collection practices than rate collection practices. DWP services provide unsecured credit to individual persons, which renders the application of the uniform commercial code different for residential customers and commercial customers. For example, utilities would have not necessarily expect that family members will pay the unsecured credits of a dead residential customer who is an individual. This is one example of what is termed “due” discrimination (as compared to undue discrimination) in the utility business. Customers are not always treated exactly alike because of a difference that is deemed reasonable due to a clear rationale.

-Mr. Howard’s replacement was David Wright, who quickly moved to install Paul Paradis as the project manager on billing system stabilization in the first quarter of 2015. Mr. Paradis worked closely with three people: Mark Townsend, Kathy Wright, and Flora Chang. Mark Townsend was the project manager at the time the new billing system was launched, and had worked closely with Ms. Wright and Ms. Chang in that role.

- On July 1, 2015, OPA published its report, “Learning from DWP’s Billing System Challenges.” Information about reduced load and bad debt previously expensed were removed from that draft report due to a wide range of uncertainty about the amounts. OPA revealed the status of these items in an attachment using audited numbers for accounts receivable, unbilled and otherwise accrued retail revenue. The only public version of estimates at that time was the increase in bad debt reserve, which had grown approximately $100 million.

-OPA was first included in the DWP Board meetings closed sessions in the Spring of 2019. Prior to that time, OPA had been excluded since OPA’s 2012 inception.

I could go on and on, but these snippets should give you a quickie overview of this clearly accurate and damning Report.  I urge everyone to read it.

There are two recommendations which I believe are critical to the future of the Department of Water and Power, whose employees (excluding top management)

do a very good job for less cost than the private utilities.

First, and this will be the subject of future articles, the City Council needs to let them have the ability to ramp up hiring to be able to provide us with sufficient employees to keep us competitive with the privates like PG&E and SoCalEdison. And keep the lights on.

-OPA believes that DWP is constrained from hiring and contracting with sufficient speed to meet its own priorities, as well as public expectations for service quality and reliability. OPA suggests as one method of accelerating needed assistance, that a quarterly review process be initiated with the City Council at any point in time that occupied positions are more than a set threshold below the Board adopted Annual Budget’s Annual Personnel Resolution (APR) or funded occupancy. The APR ensures redundancy of staff so that attrition and continuity of service are rendered compatible in both good and bad economic conditions. The funded occupancy describes labor costs in the rates.

Finally, there’s the conclusion at the end of the Report:

“The OPA’s role is to offer advice, and never to make the decisions.

The Board could request, and the City Council could consider, adopting a point in time by month and by year to reassess progress, so that any additional decisions needed for structural changes to DWP governance do not fade off the City Council’s calendar.

OPA anticipates that a significant improvement in governance would result from asking voters to authorize the creation of a municipal utility district for water and power, separate from City government. While it is feasible to act on the recommendations above, if these actions cannot be accomplished after being actually staffed and funded, a municipal district could be pursued, for power, water, or other utilities.”

I love it.  The ultimate solution if the City Politicians can’t (or won’t) let the DWP function as a separate City Utility without their meddling or “fixing” outcomes, may make it necessary to remake it into a totally separate power and water District. Wow!

Let’s see how the DWP Board, the Mayor, and the City Council handle this hot potato of their own making.