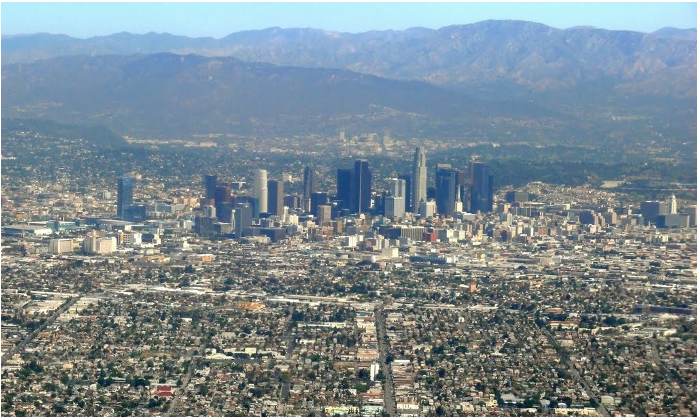 TRANSIT WATCH - Business will have to be shown that a good climate can be made for needed job growth here in Los Angeles.

Obtaining a good transportation and housing plan to bring efficiency to LA is necessary for job growth to occur.

Connections of transportation networks to each other effects the transition to electric vehicles and public transit with important influence on the efficiency of networks within themselves and for the location of additional housing in our communities as proposed by the State and LA City.

Regional Rail Networks;  By connecting the Hub of the Regional Rail Network at Union Station to a 50 Mile LA Basin Flow Boulevard Network a greater efficiency in distribution and collection of commuters can be made between suburbs and the LA Basin work centers. This would enhance rail commuting and lessen dependence on freeway commutes thereby lessening vehicular miles traveled, basin traffic congestion and pollution.

A 50 Mile LA Basin Flow Boulevard Network;  A Flow Boulevard (FB) is made by reorganizing a regular urban boulevard to become a higher capacity roadway that is rated between regular boulevards and freeways as measured on a basis of vehicles / lane / hour. A FB has continuous flowing packs of traffic somewhat like a freeway, but also has cross traffic at grade like a regular boulevard. Occurring within an existing regular boulevard width the FB higher capacity roadway has little impact and would support the additional generation of trips made by additional housing and their supporting land uses which accommodates growth. The socio-economic opportunity of better mobility is for making communities sustainable. Traffic is manageable in volume and would grow in capacity as the FB segments complete their ultimate network form.

Regular Boulevard Network;  The existing basin boulevards would be relieved from excessive traffic congestion and pollution given that the Flow Boulevard gains traffic and is capable of accepting twice the capacity of regular boulevards with its reduced CO2 emission operation and its continuous flowing traffic organization of vehicles.

Local Streets and Bike Lane Network;  Bike lanes are not to replace needed flow lanes on Flow Boulevards but may be placed in such roadways where sufficient roadway width permits safe incorporation. The primary Bike Lane Network is constructed in communities on local and residential streets, and regular boulevards. A 1000% increase in bike trip miles in the Basin is foreseen in connecting bike lanes to Flow Boulevard bus stops having Bike Stations, with safe parking for bikes so that riders can transfer in their trip to a greater reach into other communities via the FB, and even to regional objectives by connection to the Union Station rail transit hub.  The first mile, last mile bike trip, works for connecting multiple community trips and even regional trips with the trip starting within the LA Basin or in a suburban location.

Result;  The new Flow Boulevard roadway system can interrelate and help develop, all these various modal networks in the LA Basin to make them more efficient individually and most of all collectively. This is a very important fact in the prospect of adding additional housing and related support land uses to within the LA Basin as per the State and City objectives for additional housing. Plan ahead for population and transportation person trip growth while creating jobs and fighting Climate Change!

Without making a network of Flow Boulevards to increase transportation capacity in the LA Basin, that would insure there would be even greater impacts within its communities and boulevards than before Covid from transportation congestion, pollution and a related stifled economy for lack of the necessary capacity for adequate mobility.

The upgrade in capacity supplied by reorganizing regular boulevards into a network of Flow Boulevards with continuous flowing traffic can not only be quickly done, with low cost and little impact, it is more able to be compatible with the existing land use, so adding additional land use such as housing simply becomes a question of where to best put that particular type of housing. The FB corridors become natural places for walkable higher density elements of communities associated with the higher densities and the higher capacity of public transit with electric buses. This is where most of the new additional housing that is called for should be located along regular and Flow Boulevard corridors.

Referring now to the above transitional chart image above, it is seen that the present 90% of trips made by fossil fuel powered vehicles in the Basin would transition to just 30% of trips in ten years. The other 60% of trips would be transitioning to EV’s and EV bus person trip miles which would possibly increase  by as much as 1000% due to buses being fast and frequent. This accommodates the fight against Climate Change and ties into making other LA Networks work even more efficiently. Since the rail expansion has been a major investment, it should be made more efficient quickly which the LA Basin FB Network can do by connecting more sources of trip origination to it. Proceeding on the slow pace of expensive subway building hampers the Climate Change fight. The relatively quick assembly of segments of at grade existing boulevards to make the FB system performs well and with quick results.

The cost estimate for 50 miles of Flow Boulevard Network is for less than the cost of one mile of subway. Such a boulevard improvement would stimulate considerable development and tax revenues for the City, paying for itself in a short period of time. It is in the public’s interest what the economic comparison is made between a Flow Boulevard and an urban subway and also for at grade urban light rail which has been shown to conflict with vehicular traffic. Rail public transit has been notorious nationally for needing large subsidies with taxes by not supporting initial cost and yearly maintenance. Most of the rail lines serve upper class interests while moderate and lower income communities have been overlooked in getting improved mobility.  A boondoggle in segments of rail transit could be in the offing where too much money is being spent but does not perform well. The newly invented low cost FB system should be studied now because it is so compatible and efficient with existing street development and an array of buildings to be served.

The AIA has made an informal analysis of the available lots for the additional SB9 housing and came up with the conclusion that there are nowhere near the number of divisible lots to begin to serve the 400,000 units that the State and the City calls for. My interpretation of that conclusion is that it demands different housing types to start to meet the amount of urban housing units called for in order to be met. That would be R-3 multi story buildings to be included and that their location should be tied together in corridor studies to connect them to quality public transit on FB’s because the accommodation of greater travel demand would be necessary. The studies would include public participation to identify the best way to solve individual community problems as well.

50 Miles of Flow boulevard corridor should rate as a high priority on the list of Metro expenditures given that it is low in construction cost but great in benefit by making other networks more efficient as well, and is the right sort of corridor that can service additional housing units and supporting land uses. Sustainability is served by the increased efficiency to job access and for employers to be able to draw upon such a broad market of talented workers locally and regionally. Job creation is a big part of sustainability.

The gist of the story is “plan ahead” so the problems of each community can be solved in the process. Each councilmember and mayor in the Basin should be made aware that this is the appropriate approach to be taken to make better functioning communities and a major way to establish economic equity in Los Angeles with efficient access, suitable housing, and a range of necessary mobility that brings it all together.

Further explanation of the 50 Mile LA Basin Network is in a prior CityWatchla article ( https://www.citywatchla.com/index.php/cw/los-angeles/23827-ready-to-go-ready-to-grow-50-miles-of-la-basin-flow-boulevard ). And the website www.flowblvd.com has additional Flow Boulevard explanation of how it works and references to its newly U.S. patented status.

(Phillip Jon Brown is a California registered Architect, versed in the Manual Assignment Technique for engineering travel demand compliance, Masters in Urban Design M.I.T., independent study of LA Basin roadways for decades including about six years of documenting WLASawtelleNC traffic problems through meetings.  I discovered the basis for the Flow Boulevard Network principles upon which I received a patent for in 2021.)