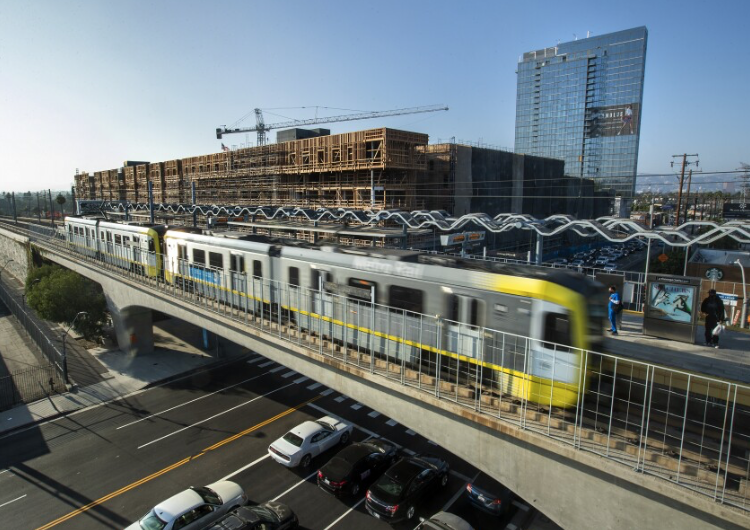 THE DOCTOR IS IN - There is a wonderful, and very long-overdue, rail line that would serve southeast L.A. County communities (largely working-class Latinos) that was approved by Metro.

The line will run from Artesia northwest to Union Station (along the former Pacific Electric Right of Way), and it would serve those who need first-rate transportation the most. Metro estimates that approximately 1 in 5 residents in that region (southeast L.A. County) don't have access to a car.

The entire line, which is rather long by the standards of many cities, but very similar in length to the Metro Expo and Blue Lines (yep, I still call them by those names, and I recommend the rest of us taxpayers do the same), is approximately 20 miles. It would connect the Blue Line to Union Station.

But the cost is $8.5 billion or so (more than double the original estimate), and two phases are recommended for funding, planning, and construction. This is tough, but all of our other rail lines have been built in stages.

It's a good line, and really a great line...and it really should have been built BEFORE the Expo Line and Pasadena/Foothill Gold Lines, but those latter two lines run through more wealthy white neighborhoods, and as well through historically African-American (are we allowed to use the term "black"?) neighborhoods who wanted revitalization.

But only now are Latinos gathering their collective voices, as they now comprise the leading ethnic fraction in South L.A., Inglewood, Compton, and Downey.

Again...this SHOULD have been priority #1. Instead, it's behind:

1) The Wilshire Subway, a great idea of a line.

2) The Crenshaw/LAX Line, which is in part a great line but which is diverted up Crenshaw Blvd. to the Expo Line as part of a restoration of the historically-African-American neighborhood in Mid-City L.A....leaving a gigantic gap of the BNSF Rail Right of Way between Inglewood through the Blue Line to Union Station to be a bikeway instead of a rail line.

3) Of course, the Crenshaw Line, if extended north to the Wilshire Subway, will be a north/south light rail line to connect the predominantly-white and African-American Westside and Mid-City neighborhoods, respectively to LAX...and THAT is when this "urban restoration" project becomes a major cog of Metro Rail.

...but the direct LAX to Downtown/Union Station rail right of way has instead been repurposed as a bikeway, which we will all suddenly recognize when the Crenshaw/LAX line is completed, and we realize that the white and African-American neighborhoods, but NOT the Latino neighborhoods of south, east, and southeast L.A. County...to say nothing of a tourism/business disaster.

4) The Eastside Gold Line Extensions, which has been rammed through because of political considerations instead of those related to transportation priorities (priorities such as this newly-approved Southeast L.A. County light rail line that SHOULD have merited first consideration based on ridership and that the fact that we blew off a vitally-located, publicly-owned rail right of way).

5) The Downtown Light Rail Connector, which was in years past blown off by Metro until rail advocates associated with the Expo Line leaned hard on Metro and showed how vital it was to figure out how to build this central cog of Metro Rail. This is a very, very good project.

For the first 15-20 years of the twenty-first century, I was as focused as any on train transportation as a way to supplement automobile, bus, bicycle, and pedestrian transportation modes. Even for LAX/airplane travel did I consider the business and transportation benefits of a L.A. Metro system.

And I mourn, and YOU should mourn, that this line didn't get built first on our publicly-owned rail right of way...because it's planned for completion in the 2040's when it should have been nearing completion NOW.

But things have changed, haven't they, since the year 2000?

1) Uber/Lyft came along and changed everything we took for granted about bus/rail commuting and other transportation needs.

2) COVID-19 made cramming into confined spaces a real scare for bus/rail transportation.

3) Metro let the homeless and a horde of gangbangers go unrestricted for many years on Metro Rail, which scared the daylights out of many potential commuters (especially female commuters, if you've got the guts to ask them).

4) The huge rise in telecommuting has changed all that we know about work/home employment paradigms..

5) But it's the latest trend of ALL subsets of commuters--all ethnicities, all socioeconomic groups, and both legal and illegal immigrants--using cars. This was occurring years before COVID-19.

So the monstrous rise in gas prices? It's effectively a tax to commuters not ready and/or willing commuters who are very, very hesitant to use transit.

Switching to electric cars, like "let them eat cake" Transportation Secretary Buttigieg proclaims? Most can't afford them...and are yet still hesitant to use transit. Whether it's satire from the Babylon Bee or any common sense perspective, commuters and taxpayers are put in a very unpleasant position .

Particularly because they've been put in this position primarily from politicians and community leaders who use their non-electric cars to get to/from home to work.

The California bullet train? Many wonder if widening the I-5 would have been better, including a lot of pro-train advocates, and they also wonder if a SoCal-Las Vegas train wouldn't have been a better priority.

I am still very much a rail advocate, and I recommend you be the same. But--as with the bicycle zealots--cars and buses and telecommuting are also viable and venerable efforts to improve, our economy, environment, and quality of life.

To repeat: there is a wonderful, and very long-overdue, rail line that would serve southeast L.A. County communities (largely working-class Latinos) that was approved by Metro.

And we hurt those who needed a good rail line the most because we focused on politics at the expense of transportation, science, and economics.