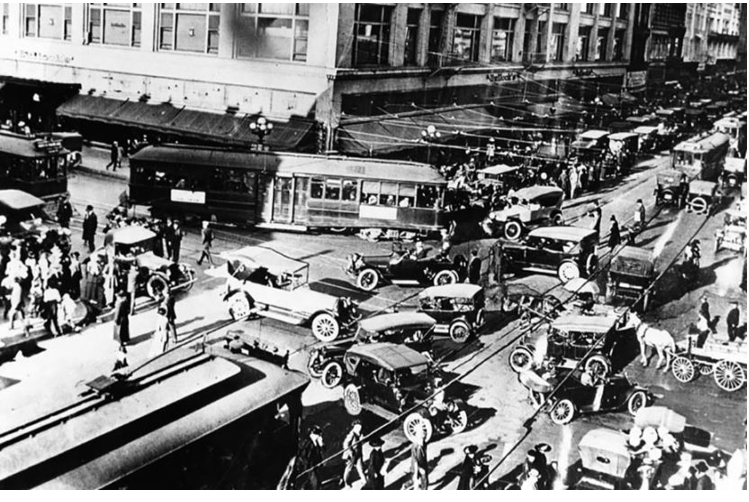 Intra-urban transit is limited to the modes of transportation within a large urban area.  As part of the on-going disinformation campaign run by Wall Street, virtually everything about intra-urban mass transit is a garbled mess.

Allegedly, Dorothy Parker said that “Los Angles was 72 suburbs looking for a downtown.”  A Manhattanophile might make the mistake of thinking Angelenos were looking for a downtown, but the reality is that since the 1920's, Angelenos had been fleeing downtown.  Starting in 1915, the city of Los Angeles knew that the eastern model of a crowded core would be a disaster for Los Angeles. (Thanks to a friend’s diligence, this link should lead to the 1915 Study of Street Traffic Condition which is the foundational study for all legitimate land use planning in the Los Angeles area. There are a number of follow up studies focusing on over densification of downtown Los Angeles and the need to get rid of the horrid trolleys.)

The Relationship Between Urban Densification and Intra-urban Mass Transit

A huge circular geographic area like Los Angeles cannot have a mass transit system like Manhattan which is 13.4 miles long and 2.3 miles wide.  People will not walk more than ½ mile to a subway or fixed trail station. In Manhattan, this is not a problem since a set of tracks running up the Westside and a set running up the Eastside remain parallel as they go north.  In Los Angeles, rail lines from the core diverge as they radiate out like spokes of a wheel.  A five mile radius is the maximum a circular city can have and still have a sufficient number of people at the 5 mile range be within ½ mile of a station.   From City Hall to the Santa Monica pier is 16 miles.  From City Hall to Grauman’s Chinese Theater is 8.6 miles.  From City Hall to the Pomona Courthouse is 30.  The relevant math is that as rail lines run farther from any core, most of the population lives too far from the rail stations.

The other problem is: in a huge geographic area, how does one get from Van Nuys to Santa Monica?  In order to use a rail line to go anywhere other than the core, there must be rail lines running across the area.  After thinking about mathematical reality for a while, most people realize that fixed rail mass transit is an impossibility.  (Draw 25 concentric circles on a piece of paper and the situation will be obvious.) It would cost far in excess of $1 trillion to construct even a portion of such a system. Construction would take so long that the Roman Empire could rise and fall four times.

Transit Catechism Has Nothing to Do with Truth

With gasoline prices experiencing a short-term spike, one can foresee Pravda West (LA Times) and Wall Street shoving a ton of falsehoods for why we must construct more subways and trolleys.  They will no doubt point to the need to get people to the dense core areas.  Hopefully, a populace who can foresee that this gasoline problem is temporary will also realize subways or trolley system will plague Los Angeles for decades.  Already the County mass transit system runs a huge deficit.  METRO obscures this reality by saying it is taxpayer funded, i.e. that is the definition of a deficit.

If we foolishly constructed more fixed rail intra-urban lines, the billionaires will become trillionaires. No matter how many subways, trolleys and trains along city streets, intra-urban cannot save Wall Street from the fiasco of the extreme over-densification of urban cores like DTLA and now Hollywood. Nor will their cohorts in the courts like Judge Mitchell Beckloff be able to stave off, the exodus of middle class Angeles.  Judge Beckloff ruled that the city need not acknowledge the existence of telecommunications when planning intra-urban transit. After all, the mega developers wanted to construct a subway line down Vermont Avenue to San Pedro. Not surprisingly LA’s internet speed is the lowest in the state. Based on 2019 data: Los Angeles with 3,990,000ppl had 36.9 Mbps, San Francisco with less than 1,000,000 ppl had 96.5 Mbps, and Bakersfield with 385,000 ppl had 77.7 Mbps.  A Superior Court Judge can realize that a first-rate intra-city telecommunications capacity is a direct threat to more subways and fixed rail construction.  The better the “Virtual Presence” capacity (a catch-all phrase for all the advanced telecommunications), the less people will use mass transit.  Even before the pandemic, far more people worked remotely than used mass transit. Telecommuting was increasing while mass transit ridership was decreasing.  The pandemic accelerated this trend.

As usual, the poor suffered the most during the pandemic, especially children who had to attend school remotely. Just as the judges readily destroy the homes of the poor to make way for upscale projects and allow slum lords to become wealthy (Channel 2 CBS special Section 8 slum lords), most judges don’t give a hoot about anything except their own care and feeding which means catering to the developer oligarchs.  But for Garcetti’s 2015 Transportation Plan and Judge Beckloff, LA’s poor students could have had adequate internet like Bakersfield.

The Pandemic Sped Up the Inevitable

Since developers cannot force people to stay in Los Angeles, we have been losing population for several years. This trend was known for over a decade. Judge Allan Goodman had ruled in January 2014, the city intentionally uses “fatally flawed data.”  Nonetheless, the lies continue to roll off the tongues of all the politicos -- “We need more dense construction.” Yeah, like kids need to drink more radiator Anti-Freeze.

King of LA Developers Rick Caruso claims, “The solution is obvious: we must build more housing, of all types, in all neighborhoods, in a smart and community-appropriate way.”  Of course, his claim is ludicrous. A city which has been losing population does not have a housing shortage.  The only shortage is for low-cost housing because developers have been destroying poor people’s homes to construct high end projects.  We have a glut of projects, between 93,000 and 115,000 vacant units, where the homeless are not allowed to live.

Mass transit contractors push the false need for more subways and fixed rail lines. The panicking density developers deceive themselves that people who can afford $3K to $5K per month for an apartment will use a subway which goes almost nowhere, takes 3 to 5 times as long as an auto, is dirty, and is crime ridden.

Brace yourself for more catechism lessons on why Los Angeles must construct more subways and fixed rail projects.

(Richard Lee Abrams has been an attorney, a Realtor and community relations consultant as well as a CityWatch contributor.  You may email him at RickLeeAbrams@Gmail.com )