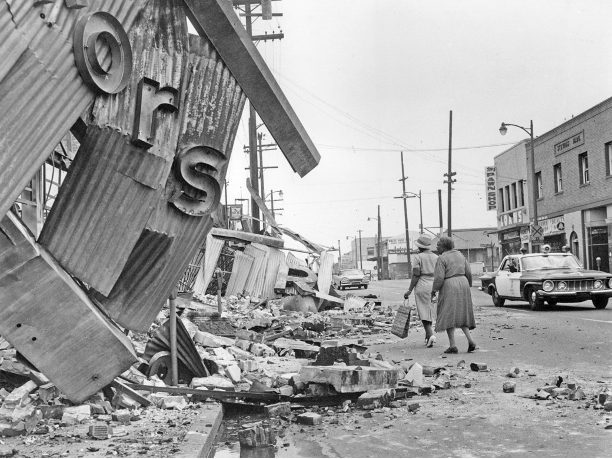 PLANNING WATCH -  The 1965 Watts and the 1972 citywide civil disturbances garnered a few days of media coverage.

Newsweek portrayed 1972 as an uprising of the have-nots versus the haves, but this analysis was not repeated by other media outlets.  They realized that keeping these epochal events of out-of-sight kept them out-of-mind. Photo: Los Angeles, 1965.

The silent treatment is no different for two major planning stories regarding homelessness, even though this issue has been the most important concern of Los Angeles voters for many years.  One short-lived breakthrough was Measure S, the 2016-17 Neighborhood Integrity Initiative.  If approved by LA’s voters, it would have required the City of Los Angeles to update its entire General Plan in about two years, including 35 Community Plans.  During this period, discretionary zoning waivers would have been tabled, a major barrier to high priced, high rise apartment buildings.  This is why large real estate investors, whose business model depended on zoning waivers, knew they could not risk Measure S’s passage.  To protect themselves, they lavishly funded the No on S campaign and hired an experienced Democratic Party campaign consultant firm, the Pasadena-based SG and A company.

SG and A’s task was to protect the financial interests of the commercial landowners and real estate developers who paid their bills.  They had to devise an electoral strategy that ignored their funders’ financial goal: making oodles of money through urban real estate deals.  SG and A realized that to win, they needed to portray the rapid updating of LA’s the General Plan, coupled with a hiatus on zoning actions, as an assault on what most voters wanted: an end to LA’s homeless crisis.  The campaign then wrapped its “War on Housing” messaging around the false claim that if Measure S passed, LA’s housing crisis would worsen because real estate developers could no longer build low priced housing.  This ploy worked, and Measure S was defeated through this deception.  In the same election, voters approved Proposition JJJ, a last minute alternative to Measure S.   It offered density bonus incentives to private developers so they would include low-priced rental units in their upscale projects.

But the story does not stop here, despite total mainstream media silence on the consequences of the defeat of Measure S and the passage of Measure JJJ.  The latter did not usher in the end of homelessness in Los Angeles.  Quite the opposite.  The housing crisis has gotten much worse, with homeless encampments popping up throughout Los Angeles.  At the time the efforts to update LA’s outdated General Plan stalled, and developers were given an even brighter green light to build their upscale residential and commercial buildings.  The result has been a building boom in up-scale apartments -- for which there is little demand. 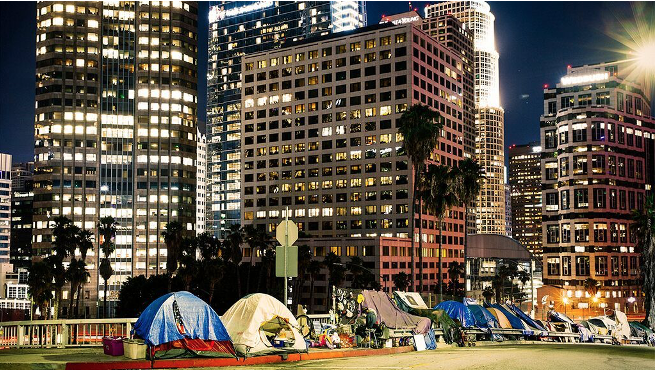 Homeless encampment in DTLA, in the shadow of new upscale housing.

The advocates of Measure S were right, and the Measure’s opponents, despite their vast funding and misleading election campaign, were wrong.  Like wars in Latin American, Africa, and the Middle East, this follow-up story hardly received any media coverage.

The No on S campaign claim that the housing crisis, especially homelessness, can be fixed by reducing administrative barriers, especially zoning and environmental laws , as well as General Plan updates, turned out to be a total blunder.  In Los Angeles, except for the new Housing Element, the updates of the General Plan’s aging elements (chapters) have ground to a halt.  The most telling example is the mandatory Land Use Element, divided into 35 Community Plans.  Their updating process began 17 years ago, and, so far, the City Council has only adopted six Community Plans.  Quite ironically, these six must be updated again.  In its full court press to defeat Measure S, the Los Angeles City Council directed the Department of City Planning to update LA’s Community Plans on a six-year cycle.

Proposition HHH.  A second front in the Planning Wars was Proposition HHH, also adopted by LA’s voters in November 2016.  In a clear shot-across the bow, City Controller Ron Galperin’s office recently issued a  highly critical 61 page report, The Problems and Progress of Proposition HHH.   The report made the following points:

As well intentioned as many supporters of Measures JJJ and HHH were, these two neo-liberal housing programs have failed.  The housing crisis cannot be solved by neo-liberal approaches that rely on private developers to build low-priced housing.  In fact, these policies made the housing crisis worse, an in-your-face outcome that the mainstream media has chosen to ignore.

Propositions JJJ (density bonuses to private developers) and HHH (low income housing loans and grants to mostly private developers) have produced virtually no low-priced housing in Los Angeles.  According to LA City Planning, from 2013 to date, 25,000 low-priced housing units have been proposed, but there is no data on how many of these proposed units were built and then rented to verified low-income tenants.

The reasons for these failures are hardly a mystery.  Both propositions depended on private developers to replace local Housing Authorities, but without CRA and HUD grants to build and operate low-priced, non-market, public housing.  Big surprise that private developers have had little interest in building and operating unprofitable low-cost housing!  Given the choice, they prefer to build highly profitable, upscale housing.

The other reason that these two programs have increased, not reduced, homelessness, is that they ignore other underlying causes of the housing crisis.   As befits supply-side (voodoo) economics, Propositions JJJ and HHH are built on the erroneous belief that homelessness results from a housing shortage.  In doing so, they ignore the following:

Where we go from here is not clear.   If LA continues on the same path, foolishly relying on profit-driven private developers to build unprofitable affordable housing, the housing crisis will get worse.  Out of frustration, elected officials will then turn to the LAPD for political rescue, which means the non-solution of pushing homeless encampments to other overpasses.

So far there is little evidence that LA’s elected officials, or even the US Congress, will turn to better housing policies, such as Vienna’s, where 62 percent of the population live in public housing.

(Dick Platkin is a former Los Angeles city planner who reports on local planning issues for CityWatchLA.  He serves on the board of United Neighborhoods for Los Angeles (UN4LA) and co-chairs the Greater Fairfax Residents Association.  Previous Planning Watch columns are available at the CityWatchLA archives.  Please send questions and corrections to rhplatkin@gmail.com.)