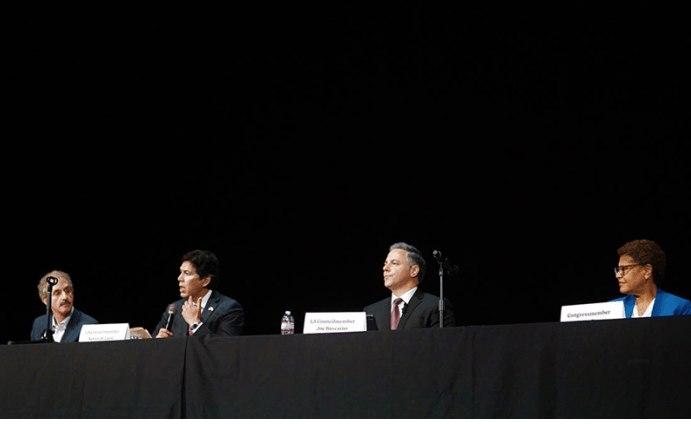 MAYORAL RACE - According to the LA City Clerk’s office, there are 28 candidates who have pulled papers to enter the race to become the next mayor of Los Angeles.

While most of the candidates running are relative unknowns, the San Pedro Democratic Club “invited” five of them to make their initial pitch to the residents of San Pedro. These five candidates may have been seen as the front runners, however, the decision to invite just these few out of the many is questionable.

All of them of course are registered Democrats, as the likelihood of a Republican candidate actually getting elected in LA these days is slim to none. Yet, the man who was last to enter the race, real estate developer Rick Caruso, hardly has stellar credentials in the blue spectrum of politics — he just registered as a Dem a few weeks ago and said a conflict on this day prevented him from joining the stage this past Sunday.

Rep. Karen Bass (D-CA 37th District) may be the early leader in the polls in the race for Los Angeles mayor, but you wouldn’t necessarily know it by attending the forum held at the Warner Grand Theatre on Feb. 27. Neither she, nor any of the other three candidates present did much to stand out from each other.

Bass was joined by Councilman Joe Buscaino (District 15), LA City Attorney Mike Feuer, and Councilman Kevin de León (District 14). The four candidates all gave vaguely similar answers to the questions that were asked by the San Pedro Democratic Club, which hosted the forum. This included how they would solve homelessness, how they would deal with neighborhood councils, and some things that were very specific to San Pedro, including Port of Los Angeles issues and butane tanks on Gaffey Street.

Part of this was because of the questions that were asked by members of the San Pedro Democratic Club, which hosted the forum. No one specifically asked if any of the candidates would make efforts to defund the Los Angeles Police Department — and because of this, none of the candidates spoke about it. At previous debates, Buscaino, Feuer and Bass all said they would increase the number of officers in the LAPD, and de León said he would maintain the same number.

Conspicuously absent was Rick Caruso, a billionaire real estate developer, who officially joined the race on Feb. 11, but was absent at previous debates as well. Also absent was former Metropolitan Transportation Authority board member Mel Wilson, though not for lack of trying. He came to the event, but said he was not allowed to participate because he had not raised enough money.

The primary election will take place on June 7, and the top two candidates will face off on Nov. 8.

Former Northwest San Pedro Neighborhood Council Vice President Laurie Jacobs said that one of the big causes for homelessness was a lack of affordable housing in the city. She asked the candidates how they would provide more.

She also called for the expanding of mental health and substance abuse treatment programs.

Feuer said he would have 10 general managers who would approve affordable housing, and would force them to speed up their process. He would expand on the transit oriented communities program which incentivizes putting multi-story, mixed use buildings on transit corridors. He also plans on using vacant commercial buildings and vacant school sites to turn into affordable housing. He also said he would change rules, and he gave one example. He said that individual tenants would have their own bedrooms and bathrooms, but share common areas with other tenants. He said this is not currently legal in LA, but he would change that.

Feuer also said he wants to preserve affordable housing by having the Housing Authority of the City of LA purchase buildings, and keep the rents low after tenants depart.

De León said the city has a housing affordability crisis, as there is plenty of vacant housing that most Angelenos cannot afford. But the only solution he gave was to mandate inclusionary housing, meaning that affordable housing is required for new developments. This is something that’s already required in many developments.

Buscaino said he has already pushed for “housing at all income levels.” He provided several examples, including the former San Pedro courthouse (which was not a city project), which will have 80% market rate housing, and 20% affordable housing. He pointed out the various developments in San Pedro, and said he would push for similar projects throughout the city. In addition, he said he will consolidate all decision-making departments into one department, including the Department of Building and Safety, LA City Planning, LA Fire Department and Bureau of Engineering. To date none of the projects in Buscaino’s district even have the minimum of 15% affordable housing.

He also claimed to have housed 50% of street camping in CD 15. Where he is getting these numbers is unclear, as at the Nov. 2 meeting of the CD 15 Working Group on Homelessness, Gabriela Medina, district director for Buscaino, said that as of the 2020 homeless count, Buscaino’s office had housed 40% of people experiencing street homelessness. This does not include people living in their vehicles, which account for 1,038 of the 20,257 homeless people in CD15.

Buscaino also said that to help small businesses, he plans to phase out or get rid of the gross receipts tax, which taxes all income from a business over $100,000, regardless of its source. He also said he wants a business source center that would go to businesses to help them, and he will give out more forgivable micro-loans.

Feuer said he would lead an effort to phase out the business tax. He would also create a deputy mayor who would focus on helping small businesses. He also would create an economic development and job creation team to go through the city and come up with economic strategies. He did not go into specifics about what this team would actually do.

De León said he would change the culture within city hall to make it easier for small businesses, but did not go into specifics.

Doug Epperhart, president of Coastal San Pedro Neighborhood Council, said that neighborhood councils often had problems with the Department of Neighborhood Empowerment, and asked how the candidates would help.

Bass was the only candidate to give a somewhat interesting answer. She pointed out that she was involved in the creation of the neighborhood council system (Feuer said the same thing), but that she would totally change the system from top to bottom, or at least audit it and reevaluate it.

Bass said that the councils are a great concept, but that they still have not reached what their original intent was.

The candidates were also asked what they would do with two Rancho LLP 12.5-million-gallon butane tanks on Gaffey Street that are highly explosive, and that have a blast radius of three miles if they blew up. Unsurprisingly, each candidate said they would get rid of them, or at least try.

Bass said she was still in congress, and would try to get rid of them immediately. She was promptly told that Rep. Nanette Barragán (D-CA 44th District) and Ted Lieu (D-CA 33rd District) are already aware of the problem.

Multiple questions came up about the Port of Los Angeles. Candidates were asked who they would appoint to the Board of Harbor Commissioners, and they all said they would appoint community members who listen to nearby residents. They all oppose further automation of the port. Even though Buscaino couldn’t stop Pier 400 from being automated, he’ll try harder next time.

When asked how they would involve the community in policing, they said they would talk to people, which is what you would expect. Feuer gave the most interesting answer, even if it was only partially related to the question. He said that city council districts should be cut in half to create closer relationships with residents and their representatives. This is probably the most revolutionary idea to come out of this campaign as it would double the number of council reps, lowering the ratio of residents to representatives and cut their salaries in half to pay for it. A full interview with Feuer can be found on RLn’s website at https://tinyurl.com/RLNFeuer.

Buscaino, a former LAPD officer, said he would listen to people, but shut down any looting. He didn’t go into specifics of how he would do that, but probably in the same way he would deal with homelessness, as his strategy has always been to over-police them. He is currently gathering signatures for a ballot measure that would prioritize making temporary housing faster, but also make sitting or lying in any public space illegal, essentially criminalizing homelessness. He never brought this up at the debate, nor did any of the chosen few who asked questions challenge him on this point.

In the end this event seemed like a carefully crafted exercise to create the pretense of an open debate but failed to ask the kind of questions the media would have asked. And so the report here is more a witnessing of a prepackaged event that felt more like a PR event for the San Pedro Democratic Club.