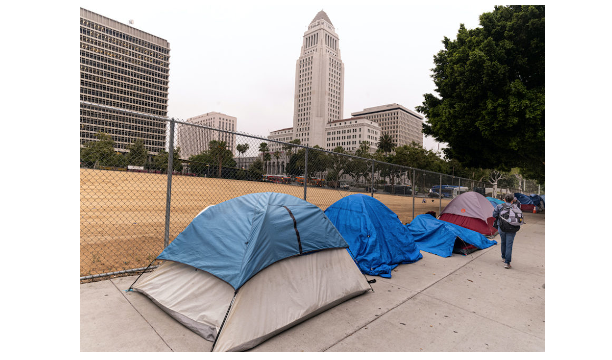 HOUSING WATCH - Today, the Los Angeles City Council unanimously approved a motion that instructs city agencies to provide a report about city-owned properties that can be used for temporary or permanent homeless housing.

Housing Is A Human Right applauds the council’s action, and we urge L.A. elected leaders to swiftly provide more housing for the vulnerable.

“We thank L.A. Councilmember Kevin de León for his leadership in sponsoring the motion,” says Susie Shannon, Policy Director of Housing Is A Human Right. “We’re pleased to see the City Council approve the homeless housing report — it’s been long overdue. The City Council and Mayor Eric Garcetti must now ensure that the report is completed quickly — and then produce housing with urgency. More than 1,300 unhoused people died last year in L.A. County. Lives hang in the balance, especially as the pandemic continues.”

Housing Is A Human Right also asks the City Council and Mayor Garcetti to think big. Below, we present a short list of properties that L.A. officials should consider for low-income and homeless housing.

“Beyond the homeless housing report,” says Shannon, “city leaders must be creative in their approach to deliver more low-income and homeless housing. That includes innovative models such as prefabricated housing that allows for the production of more housing for less money, buying properties for the development of housing, and utilizing the adaptive reuse of existing buildings.”

In Downtown L.A., the site of the former Los Angeles Police Department headquarters, known as Parker Center, is a prime location to build. In Hollywood, the city can purchase the empty Sunset-Gordon apartment building and quickly turn more than 250 units into low-income and homeless housing.

Also in Hollywood, the Sears building on Santa Monica Boulevard is an excellent candidate for adaptive reuse. In Westlake, an empty lot next to the Holiday Inn Express at 611 S. Westlake Avenue is another location for low-income and homeless housing.

And we support L.A. County Supervisor Hilda Solis’ plan for the adaptive reuse of the former LAC+USC General Hospital — the city of Los Angeles should offer any assistance, if needed, to complete that project.

More than 66,000 people live on the streets in Los Angeles County, including 41,290 in the city of Los Angeles. Homeless deaths in L.A. County increased by more than 30 percent in 2020. People are facing a dire situation — and have been for years. L.A. politicians must act now.

Housing Is A Human Right (HHR) is the housing advocacy division of AIDS Healthcare Foundation (AHF), the world’s largest HIV/AIDS medical-care nonprofit. AHF also operates Healthy Housing Foundation (HHF), a housing provider for low-income and unhoused people. Since 2017, HHF has utilized the adaptive reuse of motels and hotels to speedily house hundreds in the L.A. area.

For years, AHF and Housing Is A Human Right have urged state and local elected officials to replicate Healthy Housing Foundation’s highly successful model. In 2020, in response to the COVID-19 pandemic, Gov. Gavin Newsom established Project Roomkey to protect the health of homeless individuals by housing them in motels and hotels. Numerous California cities have utilized the program, and the Biden Administration is offering 100 percent reimbursement for shelter-in-place hotel costs for the homeless.

HHR is pleased to see government officials now following the lead of Healthy Housing Foundation. We urge state and local elected leaders to continue to act quickly, providing much-needed shelter not only for the short-term, but for the long-term as well.

(This column was provided by Housing is a Human Right, the housing advocacy division of AIDS Healthcare Foundation.)