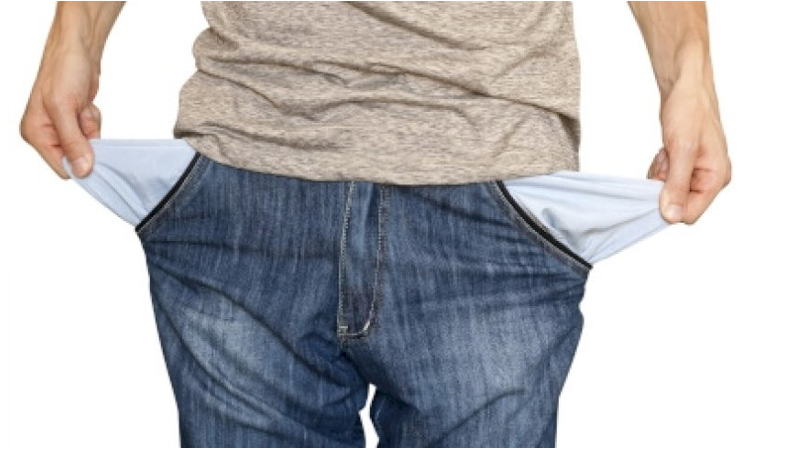 PLANNING WATCH - Large cities in the US, especially Los Angeles, are now filled with squalor, with tens of thousands of people sleeping on the streets, in tents, or in cars.

The lucky ones can keep a roof over their head by living in crowded apartments or couch surfing, paying more than 30 percent of their income to keep off the streets.

Furthermore, LA’s infrastructure, like its urban forest, streets, and sidewalks, is in bad shape, with public services, such as hospitals, schools, and libraries barely holding on.  In fact, the American Society of Civil Engineers, which issues a national infrastructure report card, grades the country’s infrastructure C-.  They call this an improvement from previous years, when the U.S. was stuck with D’s, similar to the State of California.

How do we explain these deplorable conditions, especially homeless people living on broken sidewalks and streets, often a stone’s throw from opulent new luxury apartments?  A popular, but dubious explanation is that there is just not enough money to properly shelter the homeless, repair sidewalks, repave streets, plant and care for street trees, provide mental health and medical care, and operate quality public schools.   While the claim of “just no money“ endlessly repeats – it always skips over tax cuts for large investors, military spending, and police departments.

Is the United States a poor country?  The data indicate that the United States remains an extremely wealthy country, and despite its economic inequality, it has more than enough resources to properly address homelessness and public infrastructure.

As measured by Gross Domestic Product (GDP), the International Monetary Fund and the World Bank report that the United States is the wealthiest country in the world.  China is #2, and the perpetual boogeyman, Russia, is #11, with a GDP smaller than Canada’s.

Perhaps, though, the U.S. is a poor country that can’t keep its infrastructure in decent shape or its shelter its entire population because it has a low per capita income.  Wrong again, because the U.S. ranks #9 among 215 countries.  Its average annual per capita income is $69,375.  By this measure, too, the U.S. is hardly too broke to build public housing, repave sidewalks and streets, plant trees, and operate mental health clinics.

Another window on the U.S. economy is the Gini coefficient, an index of economic inequality.  The Gini ratio for the US is 41.4, similar to Turkey, Peru, and Bulgaria.  The US ranks 51 out of 159 countries according to the World Bank, not that different than China (# 68) and Russia (# 77).  This figure reveals substantial inequality in the United States, but economic inequality, in itself, does not cause sidewalks to buckle and homeless encampments to mushroom.  Other factors must also be in play.

Another closely related explanation for why there is so much homelessness in LA amid so much plenty could be poverty.  Compared to 25 other OECD countries, the United States has the highest rates of general and child poverty.  But the official U.S. poverty rate (18 %) is similar to Sweden’s and less than the UK, Italy, and Spain.  Clearly, poverty alone does not account for what ails Los Angeles.

Is Los Angeles a poor city?  Could it be that Los Angeles has its own unique traits that cause its homeless and infrastructure crises, even though the United States is a rich country and California’s economy is larger than nearly every other country’s.   Compared to other U.S. cities, only New York has more millionaires and billionaires than Los Angeles, and 55 of the country’s 1000 wealthiest neighborhoods are in the Los Angeles area.  But Los Angeles has so much internal variation that it is not among the 100 wealthiest cities in the United States.  LA’s affluent areas, like Bel Air, with a median household income of $207,000 per year, are offset by many low income neighborhoods, where median household income hovers at $40,000 per year.

Another possible explanation for why our vast wealth does not translate into the elimination of homelessness is low taxes.  But California, according to the Business Insider, ranks ninth among the US states in overall taxation, behind Massachusetts, New York, and Connecticut.  Despite Proposition 13, California is running a $45 billion budget surplus, and Los Angeles has tax revenue that now tops $11 billion per year. 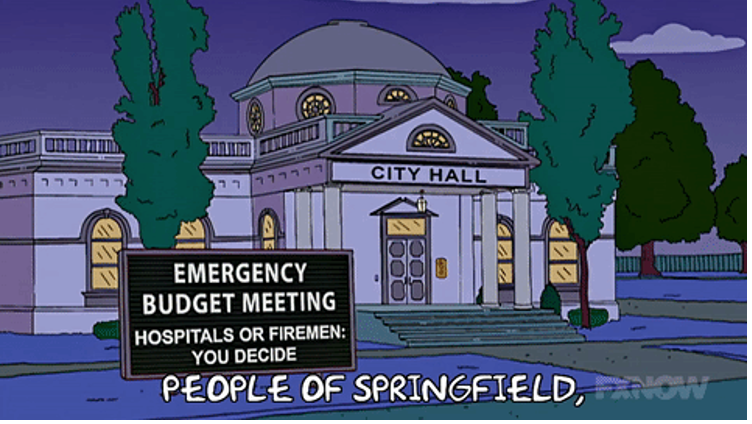 Scene from The Simpsons on a municipal emergency budget hearing.

The best analysis of LA’s budget priorities I could find was prepared by Jenna Chandler for Curbed LA.  In June 2020, when the City Council adopted LA’s 2021 budget, Chandler wrote that the City’s budget was based on the priorities of LA’s elected officials:

Other indicators of the City’s skewed priorities include the following:

The City Council recently adopted the 2021-2029 Housing Element, part of LA’s General Plan.  Its primary implementation tools are widespread upzoning and larger density bonuses.  These programs are the modern equivalent of previous urban renewal programs.  They incentivize new in-fill construction, even when it demolishes existing low-income housing and displaces the low-income tenants who lived in them.  The only difference between old urban renewal programs and new up-zoning schemes is that the former requires large scale government intervention, while the latter relies on private investors in cahoots with City Hall officials.

There are two other indicators that LA’s decaying infrastructure and public services are a rock bottom City Hall priority.  The City Council adopted the General Plan’s public infrastructure element in 1972, and it only addresses city-collected refuse.  It makes a good bookend to the similar General Plan element for public services.  The City Council adopted it in 1969, and it only addresses cultural and historical monuments.  Over the past half-century City Hall has not monitored, updated, replaced, or rescinded either antique General Plan element.

This shameful record reveals that, like the housing crisis, City Hall has little concern about deteriorating public infrastructure and services.  Squalor and decay are nothing more than the cost of doing business: encouraging expensive residential and commercial in-fill buildings in such popular neighborhoods as DTLA, Koreatown, Miracle Mile, Hollywood, and Warner Center.

The lesson is clear:  The next time someone presents the just-no-money excuse to you, be wary. Remember they are really telling you that public housing and public infrastructure are their rock bottom budget priorities.